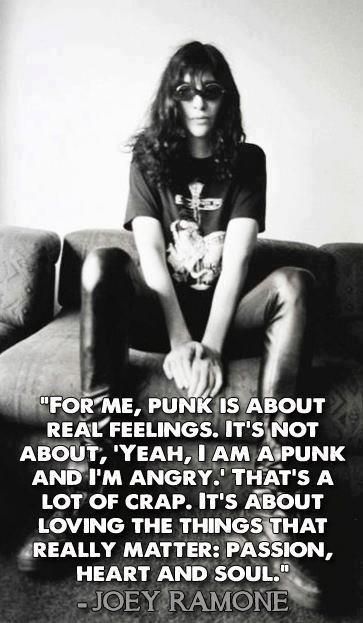 “Punk rock is just another word for freedom.”
– Patti Smith

I'm a goth before a punk. Goth music itself was an out-growth of post-punk but I was into punk music too when I was young. I still like to hear some of it too. My husband is really into punk music. I guess when we met, some of these mutual interests coincided. We always talked about "do it yourself" which impacted my idea to do my own art shows years ago and the "ethos" of punk. Yes, we are different couple. There was politics in punk too, like when the Clash stood up for striking miners and advanced political and social justice.

The worse thing in punk was "selling out".  We are now in an era, where we need some more music that stands up instead of corporate manufactured music. The music made what some called "ugly" beautiful. You didn't even have to be able to sing to play punk music. You could do your own thing. Some connect punk rock to rebellion, but is rebellion a bad thing? It made for some damn good music.

Punk bands I used to listen to and still listen to at times now,  included The Clash, Black Flag, Dead Kennedys, Minute Men, Buzzcocks, Lard with Jello Biafra, Husker Du, Dead Milkmen, Public Image Limited, Violent Femmes, and L7. My husband introduced me to the Ramones and many others.
Posted by Five Hundred Pound Peep at 9:18 PM