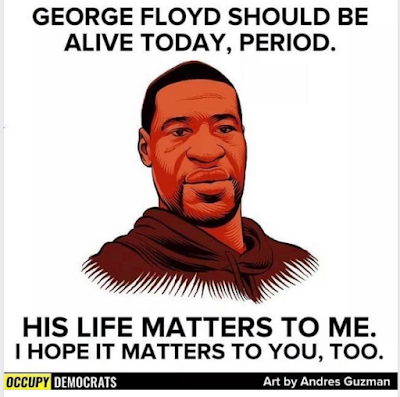 Just like Eric Garner....another black man killed by police and he said, "I can't breathe" too.

I couldn't watch all the video when that cop killed George Floyd, it was too much. Watching the other evil cops stand there too while the man begged for his life, barely able to talk, was too much. They should be charged as accessories to his murder.

America becomes a worse fascist and racist hellhole everyday. Trump the traitor is making it happen.

Watching the Orange Monster incite more violence and crow on Twitter about his Secret Service doing violence against Americans was disgusting. In the 19th century, Trump would already have been tarred and feathered and driven out on the rails.

I wrote some time ago, riots were coming. We have 40 million plus and counting unemployed and a non-contained pandemic. One spark is all it took to set it off. There's so much police brutality in this country, it was going to happen somewhere. Sadly George Floyd is one man among many black men and women killed by police brutality.

Our elites don't care, this is why they keep pushing people to the brink, destroying their lives and doing genocide on them-COVID 19 IS GENOCIDE and the African American community is one of the communities suffering the worse--as well as Native Americans without some push back.

Republicans with too many Dem enablers are responsible now for civil unrest in America. The fact nothing is being done about Trump even as he incites violence means the system is probably beyond repair. One can have hope with the good police who quelled violence in their communities like the Flint sheriff who marched with protesters, but sadly most are promoting as much violence as possible, even shooting at people with paint canisters as they stand on their porches in Minneapolis.

"The Rise of the American Idiot"

"The world’s idiot army is being desensitized, habituated, to mass death, to violence on a surreal scale. The world’s demagogues — Trump, Bolsonaro, etc — they aren’t letting death on a mass scale happen and regretting it. They’re revelling in it. Why? Because they know if they can get people to cross this last line, then anything is possible.

It’s one thing to get people to vote against their own healthcare, retirement, education, income, savings — as Trump, Putin, Bolsonaro, Farage all did. It’s another — much greater one — to bring people to the point that mass death doesn’t register anymore. Then, if you’re a demagogue, you can manipulate and twist a country any way you like.

Once people have accepted the level of degradation of mass death, there is no further kind of degradation left. They have been dehumanized fully, finally. That is why the demagogues of the world are letting the pandemic rage. Just as any abuser knows that his victim being hurt is good for him, so too the demagogues know that a pandemic is a powerful weapon, too."

The Rise of the American Idiot
Posted by Five Hundred Pound Peep at 9:44 AM 4 comments: