Questioning the Covid Lies in Memes

Here are some memes with comments for today. I save memes I like as I scroll the internet so here you go. Comments included: 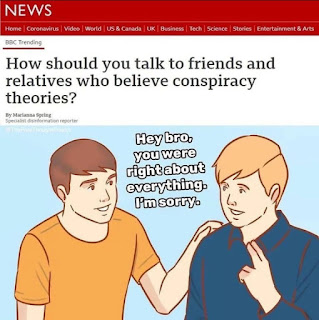 I wanted to be "rational" and give up on conspiracy theories. I did learn many were lies, and propaganda used to steer the population. There's a lot of phony bull crap out there.

Qanon definitely was put to use to put us where we are today. What am I to think when things are happening that I warned about 20-10 years ago during my most hardcore bible prophecy and conspiracy days? I wrote on my religion blog, that the powers that be could use a worldwide plague to crack down and take control. Hmmmm, I wrote that in 2014. Even the Fema camps don't seem to be an impossibility now. 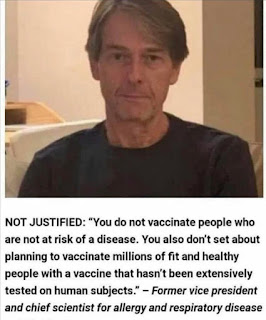 Google Mike Yeadon, who used to work for Pfizer. Why they are giving experimental vaxx to teens and children who have no risk from Covid? You don't sacrifice the young for the old. That's definitely one way society has gone twisted. Psychopaths don't care about experimenting on children and putting their long range health and fertility at risk. There are doctors and scientists who are not sold out warning about what is going on now.  They have silenced all these doctors and scientists on mainstream media. 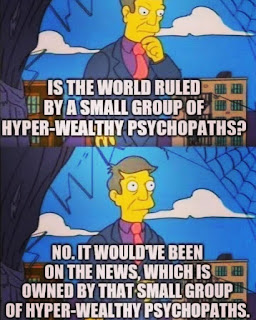 It's obvious that monied interests are now ruling the planet. It's weird how the left now bows at the feet of the uber-wealthy just like they got the right to do so via billionaire Trump. Have you notice how people always get to the same place? During Occupy days, one wasn't a "CoNsPiRaCy tHeOrIst" for questioning the powers that be.
Now unless you believe every word are out of their mouths, you have been silenced and you are labeled "crazy" just like how the Stasi did it if you dared to "question the system". It feels risky even to simply write about this stuff.  Imagine if you were around people who fully supported the system where you felt it was "dangerous" to open your mouth. The only people I know who question anything are online and far away. One thing I am noticing is how many news stories contradict. Almost as if they want the population in a state of cognitive dissonance and destabilization. 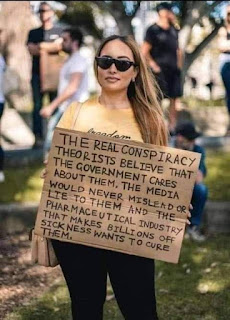 How am I supposed to believe the government cares about people's health. I was disabled when young due to lack of medical care and extreme poverty.  So I am to believe a bunch of people making billions of dollar and who profit from crisis, "care"? Give me a break.  I can't even afford the high power hearing aids I need, that cost as much as a new car.  How many people are going without insulin and other needed medicine, but we are supposed to think they give a damn? I'm sick of being gaslighted and lied to as well.

People at least used to question corporations. The pharmaceutical companies do make some medicines that work, but whose holding them accountable anymore? I read the horror stories online about everyone getting sick from the Covid vaxx, and no one cares about those folks. I've seen them get banned and censored too. 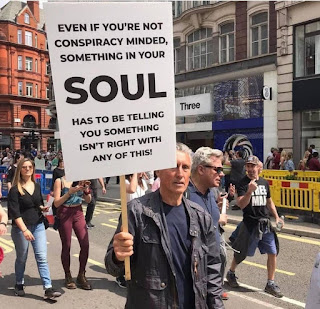 Why and how is this all still acceptable? Two years of our lives taken away for what? My social life is basically gone. I feel distanced from every group I am in because they believe all the rhetoric. I've been silenced and ignored even with the most mild of statements. The poverty and other signs of decay are growing around us.

Remember in my case, I believe the virus is "real" and the people who actually had it got glass lungs and a need for oxygen. The PCR tests labeled a bunch of regular colds and flus as being Covid.  It's like being an anti-Nazi during the Nazi era, I'm scared to be "found out", they may all put the "unvaxxed" in camps one day. I already lost two friends writing what I have on this blog. They never tried to talk to me. I was just cut off. People don't see how the division in America has been used to have them march onward with no critical thinking.

Outside of my marriage I am living in complete isolation. There's no fun or joy left anymore at least where I live. I and my husband do have fun together but imagine a life with no other people in it. People are so depressed when I do go out, it comes through even in the grocery store. I wish they'd get pissed instead and start asking questions and making demands.

There are groups already banning people for refusing to sign up for the vaxx. I have taken refuge in art and movies, but this is time, I could ill afford to lose. Now they are saying there is a "Delta" variant the Covid vaxx doesn't even work on. What next the Gamma variant? The vaxxed here by the way did not return to normal life, all events have been held outdoors in the heat, they still space themselves out on chairs. It is like the war on drugs and the war on terror, designed to have no end.  Once the lock downs began, I believe they never planned to end them. Some places like Florida and Texas people are living more normal. That's not where I live. 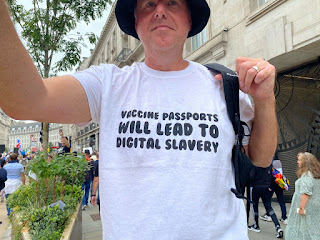 This is proven stuff now, they are trying to institute a social credit system in America tied to the vaxx, and it's not conspiracy. These V. passports will mean all freedom is lost. The government now can lock us down and call for a new booster every 6 months. Google "Digital ID", "Whitney Webb", "The Great Re-Set". People think "Oh it never could happen". Remember we were told two weeks to flatten the curve and now we are well into the second year. 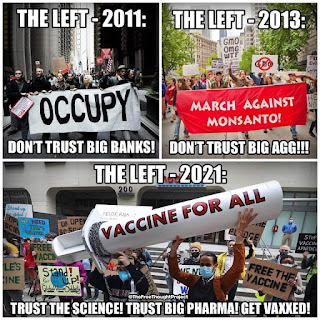 I am now politically homeless. While I support some traditionally leftist political positions, the left has betrayed and disappointed beyond measure. The days of protesting against WTO and big corporations is over. Even many social movements and causes have been co-opted and exploited by big corporations and sold down the river. I am not a right winger either. Notice the trend for both sides, is the authoritarianism they both support. They hand all the power to the top. I am an anti-authoritarian, so there's no political place for me. 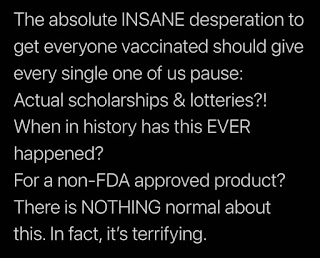 One thing I noticed is no medical exemptions. They didn't care about people with extreme autoimmune disorders, or a history of anaphylaxis or even those with an immediate family history of pericarditis and other autoimmune vascular disorders.  Even the fact they are pushing all these incentives is suspicious as hell. None of this has been normal whatsoever. They also didn't study either, the effects of other medications. It has been scary to watch all the numbers of the vaccine injured rise to the skies, and endless reports of horrific side effects, there's two women who have their stories of blindness being shared on Twitter and no one cares. All other medicines with these side effects would be taken off the market. No one cares about the young men getting myocarditis either. 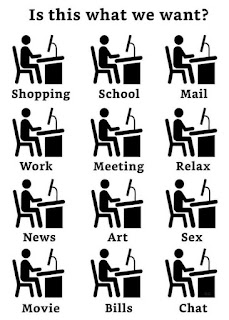 My life is spent on computers, well many zoom groups have shut down, but this seems to be the future they want for us, with no spontaneous interaction, community or living a real life. They want us living a virtual life through screens only. I am right now trying to figure out how to get a "real life" again, I am not happy living in a community where I have no close people to talk to about anything "real". I have withdrawn from circles, where I have felt silenced.  It is scary out there as independent thinking is not accepted now. Living 2 years like this has hurt me. If I was not married, and did not have  his love and support it would be even worse. We are lucky to have each other. I feel so utterly lonely now outside of my marriage. People don't question any of this around here.

No one seems to be thinking ahead on the long term, as to how society is being massively changed. I remember when Covid first broke out, I was asking those questions already in this article:

The Social Engineering of Covid19

It turned out far worse than I could have dreamed back then.

Posted by Five Hundred Pound Peep at 9:59 AM 33 comments: