The Turpin Parents Sentenced to 25 Years to Life


The Turpin parents have been sentenced to 25 Years to Life. Even those monsters pleaded guilty given the stack of evidence against them including their own children's journals. One thing I worry about though, is I saw how the children all focused on "forgiving" their parents and I find myself worried they have bad therapists who are not warning them about narcissism, sociopathy or no contact. The "forgiveness and reconciliation" messages were the ones therapists gave many an ACON putting an end to their earlier no-contact decisions. A few of the children seem fully enmeshed in Stockholm Syndrome. Many ACONS can see Stockholm Syndrome in action that lasts life long in siblings and other relatives.

Sadly with the children being pressured to "forgive" their parents, and the mother doing her fake apology, we are seeing the ever present pressure put on victims to "forgive and forget" rather then the evil to fully repent. The young are still taught to elevate even the most evil parents. The realities of sociopathy are denied these children even adult children. I understand them being given the tools to move on, and get new lives, but that part worries me.

I find myself thinking no one is warning them of the realities of abusers, and those monsters will wheedle back into their lives,once they get out of prison, so Jane Doe Turpin at 50 years old will have Mommy return to make her life hell in her 70s. If "forgiveness" instead of self empowerment and learning to own emotions is taught, I find myself thinking these kids could be re-offended against as visitation is granted back with their parents. Ever see the movie White Oleander about a sociopathic mother and her daughter? She had visits with her and plenty of mind screws and emotional abuse can be unloaded on children even if a parent is in prison. These two have the fundamentalist Christian guilt and control toolbox to use at their disposal too.

I know my own post questioning "forgive and forget" was very controversial on this blog. This is a perfect example of what I was talking about. I get tired of this society enabling abusers this way and teaching victims this nonsense. I know this may be a controversial opinion, as abuse victims are focused on to FORGIVE more then the offenders to repent, or the realities of people with no consciences taught.

One child said to the parents:

"“Sometimes I still have nightmares of things that happened such as my siblings being chained up and beaten,” Joshua Turpin, 27, said as he slouched over a lectern, wearing a tie and jeans. “I love my parents and I have forgiven them for much of what they did.”

What worries me here, is not that this young adult may recede into anger or thoughts of revenge and yes those should be avoided, but that he has been taught "forgive and forget" to the point there is a denial of WHO his parents really are. These are messages that can leave even the abused young adults vulnerable in their future, to other abusers to the idea that all human beings can even love.
While our justice system still attempts to get some of a job done to protect people from the violent or those without conscience, what are these young adults and children being taught about their abuse? Why is the focus on their forgiveness?

I know my article asking, "Why Did She Apologize to Her Serial Killer Father?" was very controversial. Many people thought it horrible that I was writing against forgiveness but can one truly forgive someone who is not sorry, who feels no love? People who literally starved and chained up their children for YEARS are without conscience. This young adult male needs to be taught empowerment, not more submission and making "nice" with parents who destroyed even his early adult life. Also where will those angry feelings go? They have to have some anger inside, but this is not admitted.

As I wrote in that other article, we see this happen time and time again:

The evil are empowered on multiple levels in this society. Those who enact the worse crimes who don't have a sorry bone in their bodies, are excused and empowered while their victims or families of their victims are told to "forgive".  I understand moving forward from abusers, but why are are their victims told over and over to suppress all emotions, to "forgive" and to give them place after place? This is especially strong in some religious circles.

I hope the Turpin children and adult children can truly move on. This was a horrifying case of the worse abuse exposed for years.  They will need years of therapy to overcome the brainwashing by their religious parents and exposure to the outside world to learn more reality. Sadly they are vulnerable dependent on the state and others for financial survival. Other dynamics they may have to deal with are siblings identifying with the abusers or remaining in denial, or being used and abused as charity cases and projects or for "study". They have a lot of new information to process even from their former isolation from the world. I hope they are empowered enough as the years pass by that they do not remain vulnerable to being exploited again by the parents, or relatives from the same toxic family system.

Posted by Five Hundred Pound Peep at 8:42 AM 12 comments: 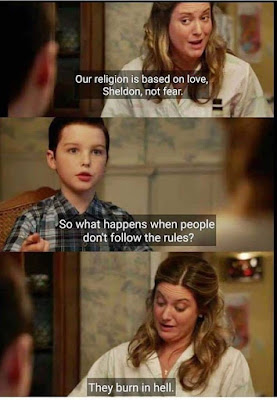 This is a meme making the rounds. I came to the belief that hell was all about control and the powers that be ran with it, to keep people in line. Basically it is the message of "Obey or else!"  Even before my deconversion, I thought love can't exist with fear. A lot of deconverted people struggle with some PTSD when it comes to hell and it's threats. After all, I was told in the IFB, someone "fallen away" like me was going to burn in the hottest part of hell.

Can you really love someone who threatens you with eternal suffering if you don't love them? It was really messed up. Whatever religion you are, I hope it is one that wants more love and kindness in the world. In my opinion, there's nothing loving about hell.
Posted by Five Hundred Pound Peep at 8:00 AM No comments: