Germphobes are now living their worse nightmare. So now they are telling us to wash our hands, well some of us washed their hands all the time.

Weird questions have come to my mind.... Does this mean society is going to collapse like all my old bible prophecy books told me? Is the asteroid next?

Will I be foraging in the woods on a breaking apart walker? Is the USA economy going to collapse? Some are worried about this. Are a bunch of people going to die? This is where being a newly deconverted conspiracy theorist feels like a nightmare of it's own.

I finally get my head screwed on straight and something worse then 9-11 happens. I live in a small town but the streets are still empty and people are freaked out.  In real life, remaining silent seems best because dumping my screaming inside emotions on anyone, is just going to cause problems.

My conspiracy theory mind....[I still believe in SOME conspiracy theories, while accepting a lot of them were bullcrap] starts wondering about things. Are they doing this to issue martial law? Is this to get us all vaccinated and chipped by force? Is this to make everyone live alone in their house? Is this some kind of testing event? Is this because massive protests were breaking out in Hong Kong and other countries? Did the ultra-wealthy due to Bernie's popularity realize more people in America were fed up and ready for democratic socialism and they wanted a new way to clamp society down?

Or did someone really eat a bowl of bat soup and start the pandemic rolling?

Is it a bioweapon? Which side released it if it is? How many people died for real in China, Italy, Iran and other places?


I read all that Georgia Guidestones crap that told me the elite wanted the population decreased to 500 million for the whole world so that old popular conspiracy stuff about "depopulation" is going through my head. Other conspiracy people have claimed it is related to 5G "radiation".

I apologize for some of the conspiracy musings, due to my past, but the right wingers calling it a hoax, and still going to meet at their churches of 300 plus people against government mandates are freaking me out too. They are spreading a virus even more around. They are being damned selfish! They call everything fake news and ignore the few people we have in government who may be looking out to stop a worse tragedy. Trump let this go on far too long and didn't stop the planes soon enough! I am following the scientific mandates. Flattening the curve makes sense.

This includes all the social distancing, ironically everyone is being made to live my housebound lifestyle during cold and hot months. Sadly I am missing out on a month where I can be outside. I'm used to being indoors, normal people aren't. I can see some flipping out around the time the 2 week marker hits. Extroverts will confront the limitations of Skype. What about all the poor souls who live alone? What are they supposed to do? For some it will be like solitary confinement in prison.

I've been inside as long as 90 days straight. I'm taking a few car rides with husband and to parks separate from people. The news is awful, I am going to have to take a breather after writing this to retain my sanity and stop reading some boards like collapse and coronavirus on reddit.

One scary thing, many super-sized people or other disabled people would be first on the triaged to die list if there was 20 people and 10 ventilators to be disbursed.  This already has happened in Italy.  It was not enjoyable to watch people web wide claim with relief it really only killed off the old and chronically ill.

Sometimes I wonder if this planet is hell and if we were all sent here to suffer. This is a thought only shared with the inner circle usually. God didn't step up to stop millions dying during the black plague either.  Some of my personal friends are freaked out because during my conspiracy and bible prophecy days, I talked about the "coming collapse of America" and openly researched emigration for some time but hit the chronic health and money barriers. I had this feeling of dread too, that something "bad" was going to happen soon too.

How is someone with a history of PTSD [CPTSD] diagnosed supposed to deal with this crap? I have one friend who is dealing with stage 4 cancer, how is she supposed to deal with this too? I was in an event where society collapsed for some days from a blizzard building a fire of magazines on a motel snowy lawn, but that was short and you knew it would be over. There's no therapists to talk you through as society goes under. I find myself thinking things like, "You need to toughen up, or you never will survive." My husband seems to be coping well but I am scared for him too. He's the one going out to get things we need and we have no masks only a few latex gloves. He has told me to calm down and that the scientists are on the job.

So tell me how you feel about this? Are you ready to flip out? Scared of society and the economy collapsing? I am scared for those who have had their work erased and who face health problems. How many restaurant workers are now facing serious unemployment as well as many others? Wondering what it all means. I don't even know what to think. Where I live, absolutely everything has been shut down.
Posted by Five Hundred Pound Peep at 7:33 PM 13 comments:

Email ThisBlogThis!Share to TwitterShare to FacebookShare to Pinterest
Labels: Covid19

Biden is Just More of the Same 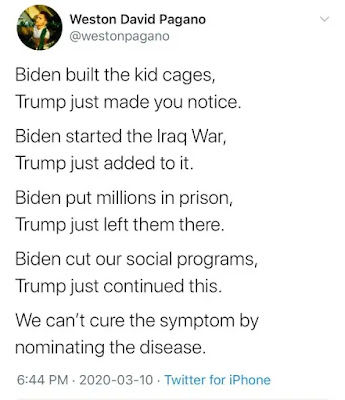 It looks like Bernie is losing, and I'm not happy. With all the cheating, gerry-mandering, propaganda, arguments about whose electable and no electable, and people like Bloomberg coming on to manipulate things, democracy is long gone. I never met one person who was gung-ho for Biden, some were for Pete or Warren, but not him. Maybe the Diebold computers were doing their thing. The disappointment is immense.
Posted by Five Hundred Pound Peep at 6:43 PM 5 comments:

"Fat Assed Prepper Survival Tips For Coronavirus Quarantine"
From Fat Lib online, a California group standing up for fat rights and disabled fat people. Some of the advice is very good. Many super-fat or other fat people do fear being triaged during this crisis.
Posted by Five Hundred Pound Peep at 9:10 AM 8 comments: