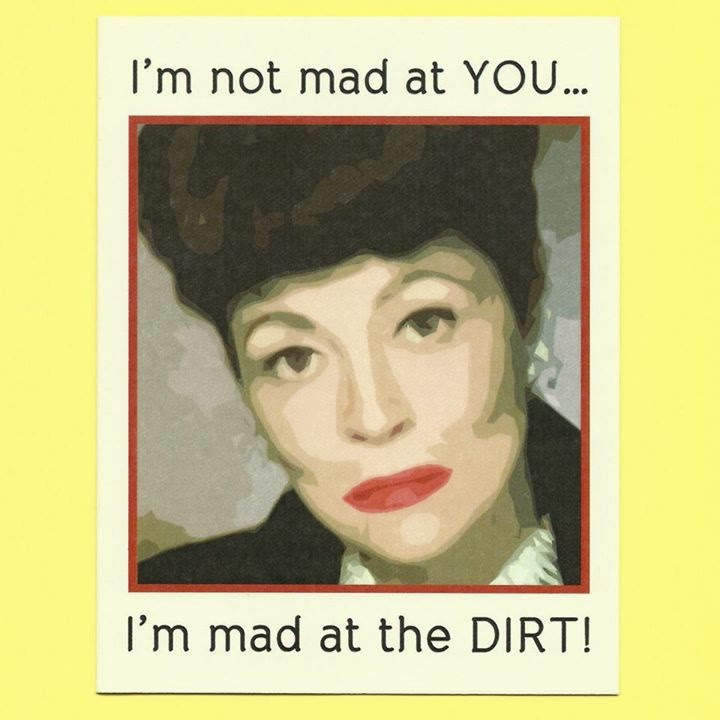 I have an odd fascination with Joan Crawford ever since I read the book Mommie Dearest since it replicated so much of my life except of course Christine lived in far wealthier and famous household. The above picture is Faye Dunaway playing Joan Crawford. One wonders if the obsession with dirt in a narcissist comes about from the "dirty insides" to create a clean image. This is why Joan Crawford went nuts about the house being perfectly clean.

I'm a fan of TCM [Turner Classic Movies] and one thing I have noted is how there are two mega-narcissist women in old movies. One is Bette Davis, and the second one is Joan Crawford.

What scares me about Joan Crawford is in watching some of the movies, you can see that Joan Crawford has used some of her background and incorporated it into her acting, this is one reason I believe "Mildred Pierce" became such a famous film. She was literally playing herself as she played the hard driving single mother, who sacrificed all for her career and spoiled a golden child narcissist daughter who near the end of the movie shows herself to not only be a materialist but murderer. The daughter isn't the only narcissist, her mother as an ice queen has trained her well but maybe too well. She is a girl raised with no sense of morality or goodness. The two even compete with each other with the cruel daughter first stealing her husband and then killing him.

In that movie at least one of the villains get's caught but I was watching this movie, on TCM the other day, called Susan and God with Joan Crawford running around with a early form of a New-Age cult, her fellow cult members sing songs about a "new earth", and "Susan" runs about doing speeches for attention while ignoring a shy daughter who wears glasses. She is estranged or divorced from her husband but the wealthy family along with hanger-ons and other relatives are all spending a summer at one of their country homes. The daughter has asked for the family to have the summer together. The estranged husband is an alcoholic. In this movie, they have Susan repent of ignoring her daughter and family and she takes another look at how her meddling and bossy ways have hurt her friends, but I found myself finding this movie unbelievable because the character is so narcissistic and self absorbed, she is far from a mild narcissistic who may have the ability for introspection and true apologies. But then I thought if Joan Crawford the person was truly a narcissist maybe it was her personality having me judge this role in the way that I did.

One disturbing part of this movie, and we know Hollywood had some unwholesome themes, was the change the daughter makes to be more popular with the boys which works, tossing her glasses away, and dressing more "sexy".  Susan influences her to be coy, to lie and be competitive and actually more narcissistic to "win" the boy's affections.  Watching this movie the plot had all the narcissistic women win the men, not the "nice girls" and that kind of disturbed me. Was this some kind of early training for narcissism? It bothered me because you think about the growing narcissism in society and well, when did it start on a historical basis?

In the generations before, ladylikeness was a big thing, so by the 1940s, some of those social mores were being changed, so why were these hard cold women so celebrated? Of course this could have come in earlier with the so called femme fatales. They have always existed in literature but these themes grew stronger as the twentieth century proceeded. It wasn't the woman of character winning the day all the time anymore. In these movies, the seductive, backstabbing, crafty woman always won the man and came out on top. Sweetness and honesty was for losers, and the nerd girl with glasses such as the daughter above left in the back of the room. This was an early celebration of narcissism. You can see it in these old movies. It seems to worsen especially in the 1940s.

While the 1950s brings back some family themes and suburban life, these type of roles still exist almost with Elizabeth Taylor later seeming to take on the roles that Joan Crawford held with a different flavor. Think "Giant", and "Cat on a Hot Tin Roof".

I never have seen Joan Crawford interviewed, I was still very young during the last days of her life and decided to see how she came across in person. This video screams narcissist, to me with the extreme pink turban, dress and heavy diamonds. She doesn't disappoint.

I think one reason Joan Crawford did so well as an actress in some of these movies,  she was LITERALLY playing herself.  "I'm a compulsive housekeeper" [1:11] is one thing she says that made me laugh.  She states that Mildred Pierce was her favorite role. "A star is someone who can.....KEEP AN IMAGE" is one telling comment she makes in the above video.


Joan Crawford's has her defenders including two children, who defend her and say that Christina, her daughter who wrote Mommie Dearest was lying. We ACONs know exactly how two children can claim they had an entirely different mother then the one who was scapegoated. Narcissists can treat one child as sweet a pie while continuing to abuse another.


I have been thinking about how narcissism is promoted in our society, and may write more articles about this. How being a person who is two-faced, and is focused on image is so advanced. It began earlier then we think. The celebration of narcissism began in our old movies.
Posted by Five Hundred Pound Peep at 2:57 PM