"You're Not Positive Enough!" My Failure to Be a Jolly Droid 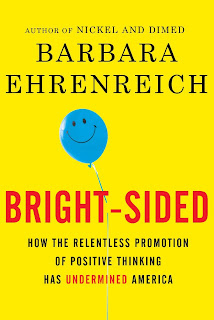 LOL yeah that is quite a title.

There is something in American culture where if you are facing health problems, financial and more, you must always keep smiling and keep positive. Being "negative" is the worse cardinal sin, you could commit, I guess more then bankers cleaning out the tills, or failing to keep a "My Life is Better then Yours!" outlook on Facebook.

I was on this Weight Loss/Obesity website, they seemed interested in the science end of things which is why I decided to hang out there but sad to say they ended up having thetypical 1984 types shouting "Conspiracy Theory" towards everything that departed from the industrial complex "status quo"...

But one odd demand they had for a woman as fat as me, was the demand that sharing any pain or distressful matters, was to be stopped at all costs. Only a forced smiling was the outcome. Any negative thoughts or unprogrammed thoughts were not allowed. Severe obesity especially with endocrine elements and vast co-morbs can be a worse disease then cancer, but trust me, they do not want to hear the "fat butts" complaining. Shut yer trap, and go be jolly and do not trouble us! In America we supposedly control every outcome of our lives and they have to keep the fantasies going even as the country collapses around us.

I of course saw this on the opposite end of the spectrum in size acceptance. Keep the balloons and party hats coming but don't you dare admit any pain or distress to ruin the "Fat and Happy" message! Trust me, they will push you out the door.

I read this great book once by Barbara Ehrenreich, called "Bright Sided: How the Relentless Promotion of Positive Thinking Has Underminded America". I do not agree with all of Ehrenreich's views on religion or politics, but wow, she nailed this one out of the ballpark.

An inlaw of mine, who got breast cancer at a very young age, told me and my husband how she got thrown out of a pink ribboned breast cancer group for being "too negative" and crying about cancer. This is someone who had just lost two parents and spent years taking care of a very ill parent who knew the score. I was astounded to hear this but then in this book Barbara Ehrenreich talks about the same thing happening to her, she shows up to the breast cancer support group and is censored and vilified for speaking about the hard stuff. Hey it has happened to me online.

She is right about how the economic melt-down in America is related to the forced positivity, shut down all inquisitive thinking and how they literally trained people to believe if anything bad happened to them [like having all their jobs outsourced] that it was THEIR FAULT. Hey same for obesity, the hyper-personal responsiblity crowd will tell you, that it is all your own doing and if you fail to solve it, it is your fault for lacking the right "magic" thinking.


"Chided for her anger and distress by doctors and fellow cancer patients and survivors, Ehrenreich explores the insistence upon optimism as a cultural and national trait, discovering its symbiotic relationship with American capitalism and how poverty, obesity, unemployment and relationship problems are being marketed as obstacles that can be overcome with the right (read: positive) mindset"

She is right. There is a lie now that every problem if you just think POSITIVE enough will be solved, and that if you are poor, or fat, or down and out, or sick, that it's your fault and some failure of will and positivity that put you in your present place. It is a sick cloying judgemental optimism, not one built in strength, and resiliency but one built in keeping the conformist status quo. With that message board I was on which I will keep unamed, I shared art work, some positive things, advice, nutritional information, but was given condemnation for "not being positive enough" for a couple posts where I dare to show a little vulnerability. And here you will see that which affects the 500lbers life to the max. Because people can see the pain via the glued on smile or even on days where you may actually be happy, because you do not fit some norm of physical perfection, everything about you is judged. In the land of plastic pod people, they better keep smiling lest everything collapses and this is now a demand!

Some have deemed America as staying in a permanent adolescence, a bratty narcissistic teen, who just doesn't want to hear the hard stuff. If one takes a look around the deepening corruption, and Ehrenreich brings this up, this is what is being wrought. The powers that be love to over-sell the personal responsibility thing because a populace that blames itself individually for every hardship instead of looking at the society and environment they are in, certainly isn't going to be a populace that asks too many questions. She talks about how ignoring reality is dangerous.

This ties into some of the voicelessness that I have spoken of fat people encountering, try and tell people, that you get sick if you try to diet, or about some of the realities you face in life, you are told that you "not positive" enough. Even if you admit positive changes like removing all MSG from one's diet, that will be used to condemn you. "How dare you touched a box of Rice a Roni to go with your chicken? You horrible person you!" Just like that doctor managing to insult me for having LESS leg infections. What a way to brow beat people and shut them up. Part of me asks what are these people so afraid of? For all their talk of being positive, those who seem so intent on silencing another's person's experience do not seem like very happy people themselves.
Posted by Five Hundred Pound Peep at 7:10 AM

Email ThisBlogThis!Share to TwitterShare to FacebookShare to Pinterest
Labels: Be an Independent Thinker, Censorship, Voicelessness