Remember when I wrote this about being so sick for a week, where I almost ended up in the hospital?

It seems some of my suspicions were correct.

It was Kidney Stones. This has been backed up with a blood test showing high uric acid, and me wrapping some of the stones and giving them to the doctor to be analyzed. The lab tested them and they were uric acid kidney stones. They looked just like this, except I didn't have some of the bigger ones in this picture, mine were more of the medium and small ones, you see below. 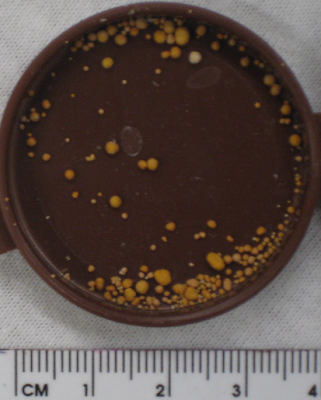 I had been noticing these stones coming out for some months, wondering if they were gallstones, or something I ate, but telling the doctors they were coming out "clean" and found in the peri area usually while showering. I noticed the orange grit in my pee a few times, and noticing the pain of barfing my guts out and abdominal pain ended once these stones made their appearance. Included in the drama were what felt like short term urinary tract infections from hell.

Seriously it was confusing wondering why my bowels felt checked out but it seems renal problems can affect your bowels, I think it is related to something called renal colic. I still have IBS, but it definitely is being affected by the kidney issue and bringing other symptoms along. When the stones pass, digestion usually returns to normal.

I have felt unwell probably for some months here, wondering what was wrong as you have seen on some of my other blog entries. What is scary, is I read about purines, and being allergic to seafood and other foods on the list including organ meats, it is weird, I have this problem. I only ate red meat twice last month which was a veal patty for husband's birthday dinner and one hamburger made at home thrown in there. Becoming a vegan, isn't much in the cards for one allergic to eggs, all dairy, and has problems with soy and tofu [really I think its the sulfates they add to it to harden it up]. The Paleo diet I always thought was kind of meat rich, though definitely good on the vegetable score. As far as the rest of the purine list, outside of some hummus and green beans, I don't eat much that is on the list except for poultry which confuses me further.

Kidney stones can come about from a variety of endocrine diseases. Cushings--[I suppose even pseudo] insulin resistance,  parathyroid problems etc.  I feel sorry for my doctors sometimes trying to make sense of all this because I know I am losing the ability to. Why is my body low on Vit D when I take 50,000 units a week still?

I even wonder if the use of inhaled steroids for my COPD is making all of this worse. I need some long discussions to have with doctors when I see them next. . My kidneys seem under severe stress and it could even be drugs I have to take for other medical problems. Sigh. My diabetes has been controlled with my A1C under a 7.0 for all years with only one 2 month period of getting a bit high with more medication added. Its running in the low 6s now. Part of me worries about the weird adrenal stuff seen from years ago too. I have noted on my medical records they see me as having mal-absorption problems, don't ask me why it isn't taking any weight off. I have no idea.

If any of my readers want to share stories about having kidney stones or what you know or if you were overweight and got diagnosed with this, then I'd be interested. They put me on medication to lower the uric acid. I am not sure what to think. How can a person have this much wrong with them? There is a point where you feel like an old broken down car, and multiple systems are checking out all at once. At least now I know there was a reason for feeling so tired, sick and in so much pain over the last months.

I promise I will write about more exciting stuff on this blog soon, then my personal health and other woes....:)