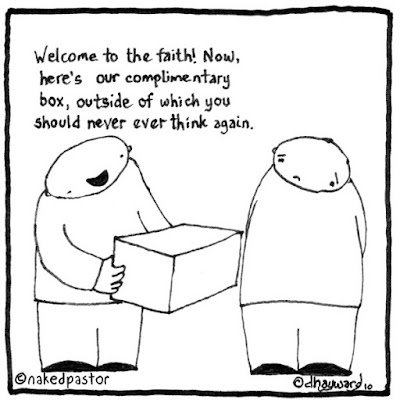 I'm still in a weird spiritual spot, I am not an atheist at this point but a conflicted theist. My husband has asked me about attending more liberal churches, but I am not ready for all the social demands yet or committing to Sunday Services. I've gotten used to sleeping in on Sunday. One thing I will admit here, one of my Aspie "interests" aka besides art, has been "religion" for years. I almost think it would be healthier to table things for awhile. And go with the flow and figure myself out.

Most people I know are Christians, I live in a small religious town. I can't talk about a lot of my doubts. Being a fat Aspie, I am not thrilled about adding Apostate to the list. I've hung out on various places on line having deep philosophical and spiritual debates. In real life, I'd upset too many people outside of my husband and a few others.

Maybe UUs could handle my questions like Why did a perfect God make imperfect people He expects to be perfect? or Why would God even create people He knew one day would end up in hell? [maybe like me] I've read too much Carl Sagan and am reading a book called "The Varieties of Scientific Experiences". His points about religion and God make sense to me. See page 185 for discussion of religion and societal control. "Religions historically have made people contented with their lot".

I am full of contradictions lately and it's hard to explain what I am going through to people. The edge of nihilism and the edge of religious hope are all combating one another in my mind. It's even hard to explain to people.Some people will say God saved them from this storm or this car accident but then there was part of me that wondered, well what about the people who didn't get saved? Were they bad people? God rescued you that day from the speeding semi, but then not that other person? Fundamentalism can make for magical thinking and almost this idea, that you are God's chosen and He's looking out for you more then anyone else. This kind of added to my burden because I couldn't make sense of my own life.  Random Chance with a spinning roulette wheel seemed to apply far more then God making immediate decisions on multiple life issues.

God never answered my prayers. Some can argue the healing and meditative quality of prayers, but that is where some of my religious doubts came in. God seemed to be staring down at me and just saying "No, No, No" like all the narcissists did to me. Some Christians online told me, "God answered my prayers!"  I felt like the kid who got a piece of coal in his Christmas stocking for a long time. I still consider God when I look at nature, and sunsets over the lake, so religious thought has not died out for me completely but I can't go down the God with a checklist, marking things off, "Today Peep's husband doesn't get the parking space" or "Today Peep will feel sick or she will feel better then usual".

I don't believe in miracles. Maybe with age, I became a cynic. Who knows?  Inside I always did feel guilty. Maybe someone like me needs to take up drinking to take the edge off but I am allergic to most alcoholic beverages. I have to reign myself in constantly. All these negative emotions swirling. At the coffee shop I felt like ripping this loudspeaker they had near the table we sat at blaring loud music that made me unable to hear anyone. They promised to "turn it down", I think they lied because it never went down one decibel. I never could be the "good holy woman" My personality chafed on the edge of my chosen religion for many years.

All these people told me to be positive. I used to feel the religious highs, thinking God would "deliver me" and after I went through this time of suffering there would be some "great meaning" in it. I could have these troubles, but I would make roses out of Kleenex and magic lemonade out of rotten lemons.  I wanted to be strong, and imagined life as a movie where a happy meaning came of it all or some violins playing. I had strange dreams about "changing" the world and being discovered as an artist. I'm not sure where this extreme idealism came from. Coping with just getting the dishes done, seemed far harder. My head was always too much in the clouds for my own good. My religious obsessions played into that.

Even with the narcissistic family,  I had strange religious thoughts. I never expected Queen Spider to budge or the top minions but maybe I had some hope that in walking away, for these last several years, that it would be a wake up call.  They would think maybe that weird fat cousin, had a few points or was right? I rescued myself from abuse, but it never brought resolution, I lost 45 people instead and even two fake "best friends" who took my family's side. How do you explain your emptied out life to people? God couldn't intervene with just one to bring me a little dignity, voice and resolution? The ex millionaire friend would gloat over my religious troubles. She was always talking about me and God my "invisible best friend". It's strange she saw "Him" as my best friend, when I couldn't even get a spiritual return phone call.

I pondered other strange stuff. I am really a liberal. It took me years to figure this out. but populism always called to my soul. I never want to oppress people. I think Universal Basic income is a great idea and imagine a society of progress. I love unions and have always been against the death penalty. The anti-intellectualism of Trump and his pals chafes. The 1950s weren't as great as some wanted to make it out to be. Running to the past and embracing it's oppressions sucks.

Worse of all I stopped being able to love a God that could fill hell up with a billion souls. It troubled me. Inside my heart recoiled. He welcomes me in to heaven, the bright white light and then I turn and will supposedly see all my Jewish, atheist, Buddhist friends and agnostic husband burning in the hot flames. It just wasn't working for me. Fundamentalism messes people up. Why did they pound into us night and day how many people were going to hell? It just feels like fear and control. It feels like the holy 1 percent cheering as the 99 percent are getting made into charcoal. I want to apologize to everyone where I brought out the fundamentalist talk.

It is so much to work through. Many people who enter into doubt regarding Christianity or who leave Christianity fundamentalism or who "deconvert" online confess how not receiving answers to prayers was part of their spiritual problem. I never saw God as a ATM machine, who would make me "rich" or a genie in the bottle, but if someone is going to have a relationship with the Lord, you need to hear back sometimes. God gave me this mind, and if it goes places He doesn't like, some of the responsibility lies with Him. The same goes for Carl Sagan.
Posted by Five Hundred Pound Peep at 10:33 AM

Email ThisBlogThis!Share to TwitterShare to FacebookShare to Pinterest
Labels: Deconversion