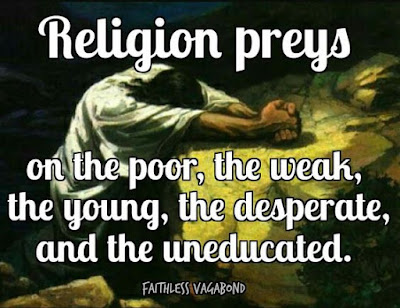 
As I have written on here before, I believe trauma can take people into toxic and controlling religions or cults.. For adult converts into highly controlling religious groups under the evangelical/fundamentalist umbrella, they do focus on people who are vulnerable and seeking "ANSWERS".

They prey on the poor, those who feel "outcast" from society and who seek belonging. I was "fed up with society", felt I didn't belong anywhere and wanted to have a sense of purpose and had a desire to change the world. I had been cut off from the UU community too living in a very rural fundamentalist town with no UU church for 100s of miles.

PEEP: one word trauma and reading too much damn bible prophecy for my own good

FRIEND: Because you didn’t strike me as someone who would fall for that

My family called me evil and Satanist
for being a UU you know [my first deconversion--I was in the UU 13 plus young adult years.....I have since returned to the UU]
it took a toll
maybe I internalized that?

FRIEND: They targeted you because you were vulnerable.

I consider the IFB a cult, though it doesn't control you in your daily life, via direct supervision.

I asked on a support board I am on:

How do you believe evangelical/fundie Christianity psychologically harmed you?

Many agreed with me they were psychologically harmed.

In my case, I was raised with uber Catholicism by the abusers, I was not allowed to have any independent thoughts, and was told constantly I was "going to hell". It was "conform or else. I would deconvert the first time. When I entered the evangelical fundie world later, I believe this was trauma based.

Here is the list I gave the support board for ex-evangelicalists and fundamentalists.....

1. The constant shame. I was taught from IFB pulpits if I had depression and anxiety it was because I was "letting Satan have his way with me" If anything bad happened or wasn't resolved from health problems to finances, I was told my "lack of faith was "impacting my life" and taught "God blesses those who obey him".
2. The magical thinking. Christianity broke my reality tester. I was taught that fantasy was real and that "the things of the human intellect are foolishness to God". They taught me to suppress the intellectual mind that took me into the first deconversion to begin with. I wasted years believing in demons, bible prophecy, conspiracies, the new world order and all this complete fantasy, and distrusting science. The magical thinking extended to life issues and the shutting down of rational thought. Praying was tons of wasted energy and based on magical thinking too.

3. Delayed development Some people raised in fundamentalist households faced this but I got the Catholic flavor.  I realized with horror like many people on these boards who were raised in the IFB instead of being adult converts, my upbringing was like theirs in many negative ways.I was not allowed to date, go to any dances, prom or parties or socialize. I was shamed for any sexual feelings or attractions to boys, but then at the same time because I had not married by age 22, I was called an old maid.  I had homophobia unleashed on me though I was straight. My development was delayed. Socially all this control affected my social skills life long even beyond the Aspergers. As I talk about on here, no contact will bring new revelations. While my high school classmates got married almost right after high school, I was kept in a state of diminished development. This would bring life long consequences.

4. False forgiveness. I was told to forgive abusers and keep them embraced in my life and to reconcile with them. It seemed all the forgiveness and kindness was to be extended to abusers and not their victims. I was told to honor parents who were abusive, and to always side step to their wishes instead of going no contact which I later did. Being told to forgive toxic personalities is a recipe for disaster. Here too is a place where Christianity ignores the fact we do have people without consciences out there. Toxic Christianity teaches bad boundaries and actually teaches against self-care.

5. Self esteem issues. I always felt like a "lesser" in fundamentalist Christianity but was following the carrot on the stick, believing that if I grew my faith, my life and finances would improve, my health problems would be eradicated, and my relationships with others would be better. Even within my parent's Catholicism, I had been taught that "good people" would have "good lives" and was set up for a major fall when disability came to knock on my door. I thought God would help me, I didn't expect shoe boxes of 50 and 100 dollar bills, but I thought I was have comfort and peace, I got the complete opposite, anxiety and self loathing. The fundamentalist world in it's classism and ableism was highly negative to my self esteem. It destroys many people's self esteems who are told they are sinful, wicked and degenerates who all need a "savior"/

6. Constant fear. The constant threats of hell, world disasters via the bible prophecy and rest was a huge negative. It increased my anxiety disorders.

Since leaving, I hit a year of deconversion this summer, I have been far more calm and happier.
I am in recovery on all these things. I got tired of being a scapegoat and God's worm, only worthy to be chaff in his furnace. I do see evangelical and fundamentalist Christianity as a mind control enterprise that serves the oppressive and powerful in our society. Religion was a tool my abusive parents used against me and sadly I internalized way too much of it's false teachings despite my earlier efforts to remove myself from it all, and fell back into the pit under a new flavor.

Deconversion does bring liberation.  The chains of religious mind control are broken.

From the link above:
"Bible Belief Creates an Authoritarian, Isolative, Threat-based Model of Reality
In Bible-believing Christianity, psychological mind-control mechanisms are coupled with beliefs from the Iron Age, including the belief that women and children are possessions of men, that children who are not hit become spoiled, that each of us is born “utterly depraved”, and that a supernatural being demands unquestioning obedience. In this view, the salvation and righteousness of believers is constantly under threat from outsiders and dark spiritual forces. Consequently, Christians need to separate themselves emotionally, spiritually, and socially from the world.These beliefs are fundamental to their overarching mental framework or “deep frame” as linguist George Lakoff would call it. Small wonder then, that many Christians emerge wounded."

Posted by Five Hundred Pound Peep at 10:01 AM

Email ThisBlogThis!Share to TwitterShare to FacebookShare to Pinterest
Labels: Deconversion