The Christo-Fascists, Trumpsters and Their Attempted Coup 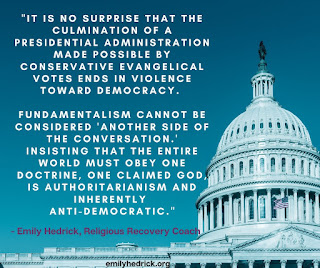 Some time ago I wrote this article:

Is Gilead Coming? Theocracy in America.

I reacted with horror to the Capitol Storming,  glued to the TV all day.  Stress gives me kidney stones too. Instead of people protesting for Medicare for All, social and economic equity, and for UBI, we have the Idiocracy of America rioting and attempting a coup for fascism and greater oppression.

My husband was still asleep and I ran into the bedroom during the first news reports and said, "Gilead's taken over the Capitol!"  He was in shock and ran to go look at the TV too.

America has lost it's mind and is now dancing with possible Civil War over a sociopathic ingrate named Donald Trump. 140 Republican representatives all came out against certifying the election, and helped pave the way for this too. Trump got up and incited his MAGA minions to storm the Capitol. Why Trump hasn't been led off on a perp walk yet is disturbing to me. He's being given too much time to do tons of damage in a narcissistic rage. He'll burn down the whole country with his stupid ego.

Pence has failed us and refused to institute the 25th amendment. Congress is now working on impeaching Trump but sadly more Republican traitors that allowed Trump to stay the last time, may betray us yet again. More threats of violence are out there including would be planned attacks on State Houses.

Evangelical Christianity and the Christo-Fascists have pushed all this. They want to rip down democracy all together and replace it with dictatorship. This is why they want to toss out an election, this is why they preach dominance at all costs. Their religion is one of authoritarianism, and their politics are too. They want to control everyone. Freedom is to be wiped away.

These were not poor people storming the Capitol, but privileged white middle aged/and boomer aged Karens and Kens who got fired from very good jobs as reported in multiple newsreports for their criminal sedition. Too bad these jerks don't really stand for anything except destruction and lies and being plague rats who refuse to wear masks. How stupid can people get? They disgust me.

Sadly one thing I worry about now as a result of their actions, kind of like when a teacher punishes a whole class for two really bad kids, is the state now will hammer down on "domestic terrorists" .  This is understandable to a degree, but the Bill of Rights is about to be shredded even more. Leftists and others will be silenced too.  Those too uneducated to learn how germs and pandemics work, probably lack the insight to think two steps ahead.

The Capitol Storming was the mixture of absurd theater, people who acted like they were on a cosplay lark, filming themselves openly for videos to be played at their future trials, and hard core murderers, criminals and others who killed policemen and planned murders and kidnappings of liberal legislators they hated. The fact the next three successors to the presidency were present is scary too. One man showed up with zipties in a paramilitary outfit, showing his intentions, oddly he brought his Mom with him. The weird guy in facemake up and horns worked as an actor but lived in his Mom's basement. The stereotype of the conspiracy Q addled incel in the basement perhaps applies here.

I found out my old extremely conservative rural town, had city officials joining Trump's traitor parade, and that one may have even been in the Capitol. The people there said they were going to go report them. Lest anyone here think these are just rare criminal creeps going on Facebook, seeing classmates try to equate looting that happened at BLM protests with a full attempted coup made me want to throw up. The sheer number of people making excuses for all of this was upsetting. I had unfriended or been unfriended by most but could still see some of their posts via other friends.

The Trumpsters posted defenses of the indefensible. While some more educated Republicans like Colin Powell have jumped ship, the MAGA masses are still buying into the myths that range from "antifa did it, to Trump is innocent". Their concerns about censorship as Twitter and other companies have shut down their radical right wing websites like Parler, have a tiny bit of merit, but what do they expect when the focus is on overthrowing the government and 245 years of a representative republic? Even hard core Capitalists know that Civil War II is very bad for business.

I wrote on one Facebook deconversion group, that I had deep shame for ever being associated with evangelicals at all. Even though I was anti-Dominionist when I was a Christian and wrote against it online, I am beyond creeped out that some things are progressing that I used to warn about.  Chris Hedges warnings about America's rapid descent seem more appropriate than ever.

America COULD go the way that Iran did in the 1980s. People don't realize, a country can be taken over by 30% of the populace, who are extremists. It happened there, with Islamic fundamentalists. Refer to the graphic novel Persepolis. The American Taliban is just like Isis, they want authoritarianism, they want religious rule. When I stared at myself in the mirror, deconverting in that one moment, saying "This religion is about oppression". I was right. Sometimes I feel like I escaped just in time. If I was among these circles during the depth of the Trump era, I don't know how I would have coped.

Bruce Grenenscer has posted about the Capitol Would be Coup  and he is right about the beliefs of the evangelical Christians influencing their horrific politics.

"That many of these insurrectionists were Evangelical Christians, should not be ignored. It’s clear to me that one mass delusion helped fuel another. These same people believe that Christianity is under attack, there’s a war on Christmas, and secularists and atheists are out to take over “their” country. On prominent display were followers of QAnon; people who are at war with the deep state; people who believe the US government is controlled by baby-eating pedophiles. Throw in a plethora of anti-science beliefs, and the mob that took over the Capitol yesterday is beyond reason. Anyone who has tried to reason with such people knows that they are beyond reason and facts. If people can uncritically believe that a virgin had a baby, a man resurrected from the dead three days after died, and the Bible is the very words of God and every word in it is true, it is not hard for them to embrace irrational (and dangerous) political ideologies. About all else, we have a truth crisis. Tens of millions of Americans have already bought into alternative explanations for what happened on Wednesday, including believing that the insurrection was fueled by ANTIFA masquerading as Trump supporters. I have several family members who have already bought into alternative explanations for what happened. No amount of evidence or facts will change their minds. Jesus is Lord, Donald Trump is God, and Democrats and secularists are Satanic."

We have this segment of the population now, mostly evangelical Christian that does not believe in science, and has spread plague to every corner of American because wearing a mask is too much for them. We have this segment of the population who does not believe in democracy or being able to accept a voted in leader they lost to. We are in very dangerous times now. We are in danger of the USA folding, or being broken up. While yes our government has grown too corrupt and is too bought off by corporations, people don't realize the alternatives when full dictatorship takes over and when there is no more free press, or voting has been wiped away. We can tell who are the kids who slept through Civics class. The Seven Mountain Monsters want control of every segment of life.

These white men with full armories, flak jackets and AK 47s were allowed to enter our state houses with no backlash, and how things just got worse and worse. If these men were POC, they would have locked everything down and shot them the second they touched the outer most step of the Capitol building. These MAGA seditionists are racist privs who don't want to lose their elevated place in society.  Look all the insurrectionists getting arrested, they all have money and 6 figure jobs. It takes cash to prep and buy an arsenal.

I've been hanging out on a Qanon message board for people who are dealing with those in their families who have turned to Qanon beliefs. I have lost friends who have, so posted about that. I also posted about my time where I got indoctrinated by conspiracy though in my case I never was Q, always hated Trump and the Republican party. One poster wrote this to me. It sums things up and I agree with him:

"I blame religion for this Qanon shit. It's not surprising that folks who were indoctrinated since childhood to accept things like talking snakes, the virgin birth & human sacrifices resurrecting will in turn believe other crazy shit. Religion taught them to accept nonsense. And they have en masse."

I fear political correctness and wanting to handle religion with kid gloves because of all the complicated implications, may have people avoid the fact that the reason America is going into a New Dark Ages. The reason for this is people have adapted Dark Ages beliefs. One thing I explored was the idea that there was so much backlash against Counter-Culture ideas which changed society that people went backwards into total regression.

I wrote this on another message board myself.

"Christianity ITSELF is a conspiracy theory. I never was Republican or a Q, always hated Trump, but I fell into conspiracy while fundie and religion ruined my thinking and made it happen so guess what I am thinking, when I watch these people. I fault Christianity for what is happening in America. Religion IS TIED to this. I remember all the anti-government, and other BS they taught me in the IFB. I was on disability so I secretly voted for Obama, for survival. LOL [Yeah I had Cognitive dissonance up the whazoo" Catholic school taught me not to trust or explore science and to think the last days were coming {I learned about Fatima more than math or evolution} so they prepped me for the fundies."

Critical, rational and sane thinking is being shut down.

Fundamentalist Religion and the Rejection of Science in America

Do you see where things are going?

I hope the USA manages to survive, and there is some addressing the corruption and more. This country is on a very dark path, when such a large segment of the population no longers believes in reality and democracy anymore.