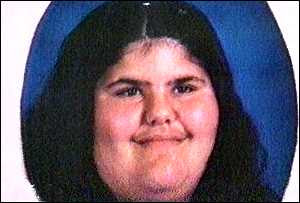 I've had a lot of time to think about this case. The year I went on disability [1997] and other health problems from a massive weight gain, is the year this case broke. Fat girl is is found dead on the floor next to some food containers, covered in waste and her mother is arrested and charged with neglect. In size acceptance news, it is the top story for months. It hits me in the gut, because I weigh about the same that VERY year and knew I was dying, and did not know why. For those who are new to this blog, see this entry.

Christina Corrigan was a young girl of thirteen who weighed 680lbs at the time of her death. Her mother later was arrested and charged with child abuse pending accounts that Christina had been found covered in bed sores and in feces. Marlene her mother was later convicted of misdemeanor child abuse.

Marlene took her daughter to doctor after doctor over 90 times, to deal with her mounting weight. Christina weighed over 200lbs by age 7, she was to gain more then 500lbs the next 6 years. In regards to the trial, one fat activist talked about it on CNN:

HULLINGER: Judy, as you sat and watched this trial, why have you come to the conclusion that obesity is the central issue of this?

She took the child to the doctor 90 times between the age of birth and eight. All that she ever got was low calorie diets and told to exercise her. She never got any kind of medical help. After you've gone 90 times to the doctor and gotten no help, why go again?

The problem is that we assume that there was something there for her. There may have been, but she wasn't getting it where she was going, and she was a member of an HMO.

The people that failed Christina was not only her mother but the medical establishment, she had been taken to doctors with no help, and only blame. It is interesting to note that her mother received blame to the criminal end, unlike the sympathy a woman would received for a child disabled by another condition. One thing, the claims about the urine and feces are a joke, everyone who dies, loosens their bowels.

The pure neglect of health problems of the severely obese and the myths that surround them grow worse and worse. No normal 13 year old girl would have been able to eat her way up to this weight. It is interesting to note that this girl up to age 3 was on a medication known for weight gain for the treatment of grand mal seizures that can bring in pituitary involvement. My conjecture today is either this medicine affected Christina's metabolism or Christina had undiagnosed Prader Willi syndrome, a genetic disorder that affects hunger and metabolism and can lead to severe weight gains in children. It is obvious too, that Christina Corrigan lacking mobility and worse, her mother was struggling to care for her.

Cardoza, the lawyer in the case admitted that medical problems not mere overeating probably contributed to Christina's weight. Her former doctor as Cardoza attested on a talk show I watched {Leeza}, said "Lady, there's nothing wrong with your kid, quit feeding her."
Sadly Christina's doctor blamed a genetic predisposition to gain weight, overeating and lack of exercise. He did some basic tests but ended it after that. His prejudices leading to bad science and what happened to this girl: Lowest common denominator medicine with a giant dash of laziness included! Even a sane person would ask..."What could a thirteen year old eat to weight 700lbs, and would a normal thirteen year old even have that type of appetite? The answer to these questions are in the negative, but when it comes to fat people, hatred overrides common sense.

Marlene attested to going to doctor after to doctor until giving up. If she is guilty of anything perhaps that is it, but the doctors are just as guilty then.

What gets me, is if the doctors didn't play the game of moral judgements of refusing to find a cause of obesity based on prejudice and the claims of immoral behavior and gluttony, what is ironic is at least some supersized people if treated with the correct medical insight could avoid the special challenges of being super sized to begin with.

Christina Corrigan for her weight alone was denied access to a normal education. From the facts of the case, one could deduce, that money was tight in the household. Her school which was placed at the top of a hill required students to walk up several flights of stairs, that Christina was incapable of surmounting. [Wonder how many disabled or older folks, can't go up them either?] NO special education or other arrangements were made. She dropped out and had to be home-tutored.

The possibility of Prader-Willi syndrome was immense. I found it odd, how no samples had been saved at her so called autopsy to do a DNA test. In Prader-Willi syndrome there is high tolerance to pain and often times skin-picking which could have accounted for all the bedsores all over Christina. The defense also pursued the avenue of brain damage from her treatment with Phenobarbital.

Only a cursory examination was done at the autopsy of Christina. The coronor looked no further then for outward visual clues denying the opportunity to find out the actual malady that affected Christina. No samples of her tissue were taken.

Christina was treated in life as she had been in death. After failing to find the reason for her extreme weight, her main pediatrician referred her to a nutritionist. Cardoza, the attorney said Dr. Ray should have realized something more needed to be done after she saw Christina's weight ballooning for six years. "My God!", he said outside the courtroom, "If that wasn't a pattern, what is a pattern?"
While her mother perhaps failed her in some ways , many other people were just as culpable, the school in failing to provide an accessible school or classroom, social services for not providing home health care, the nutritionist in not realizing this was a problem that no diet counseling in the world could solve,the doctors in not adequately diagnosing the disorder or providing other case management or help.

Today I ask, has anything changed? Are there going to be new Christina Corrigan's? Will a new young woman watch the weight go up up up, only to be blamed and vilified and not believed? The sad thing I think is probably so.

Update to this article: 2018. I was diagnosed with Lipedema stage IV in 2014, so I was correct that something more was wrong, when I started this blog in searching for what my true medical issues were. I survived the fat bigotry, just barely, Christine did not.
Posted by Five Hundred Pound Peep at 7:27 AM