Weight Loss Surgery: A Medical "Treatment" Based on Hate? 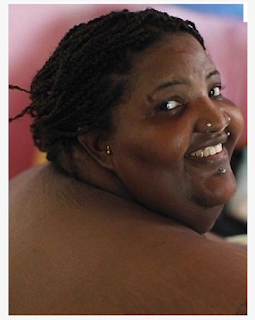 I remember seeing this woman on a TV show and wondering if she had something medically wrong with her causing her weight. She had all these daughters taking care of her as she was bed bound. I felt sorry for her, her weight was severe and she could not walk. I can't imagine the hell that would put someone through. At least I can pace around a bit as the grim reaper decides to play hockey with my body.

The doctors would show up and tell her to diet. You know the usual drill, "fatty you are eating too much, blah blah blah.", that stuff that never works. Some would cluck their tongues and shake their heads and say the usual crud with the shame games. I kept thinking "Why on earth would they think that would work?" I do think she definitely needed to go off the sugar sodas. Even the diet soda stuff will kill you.

I didn't know enough if she had a bonifide eating disorder, they did show her eating a lot of gross fried foods, in vast quantities or if something else was wrong. Course it being TV, I bet if I got on TV, they'd probably bring me a huge chicken and tell me to gnaw at it for the cameras or something. In her case, I'd go with a combination just from the little I saw. Even if she has an eating disorder, there are the satiety disorders and such the medicos ignore. No one gets to 700-800lbs when a body is working RIGHT!

I was on an antibiotic that destroys all gut flora, so I am going on probotics and taking it day by day. Things are NOT breaking down at ALL. Yes that is gross, but it's the truth.

What is scary is some of my earlier doctors suggested weight loss surgery, see below. I am not sure if this is a case of "we have nothing else" to offer you, because otherwise they admit me having metabolic problems, but maybe I should print this off and let them read it. Anyhow I wrote this in response to her article on that blog.

I refuse to get weight loss surgery and I am near 500lbs. What makes me horrified is I suffer from medical problems that it would seem doctors would never push this surgery for, including digestive problems [now diagnosed as severe IBS technically] but includes projectile vomiting and days of bowel pain that necessitates medication] With my food allergies and other problems what would be left to eat?

I will never do WLS, and I am probably what they consider one of the prime candidates...

1. Everything I know about nutrition, adds up to WLS being bad news, and I agree the lack of protein leads to some of these folks having heart attacks so soon after.

2. No decent answers to questions like, "I have serious low blood sugar problems now, how will this NOT happen with weight loss surgery"?

3. No good answers related to my own personal difficulties with endocrine and hormonal illness. I know from times of severe illness when my caloric intake has dropped to lows either from my digestive problems for a week or infections for a longer period of time that no weight has been lost. So why would this work? [As you all know, I am experiencing this now, for instance I ate nothing but half a glass of cranberry juice and half a wheat pita one day]

4. I believe I have MALABSORPTION PROBLEMS NOW. I go anemic all the time, low Vit D to the point of having to take 50,000 units once a week, low B vitamins-from B12 to B3 and other various problems in that arena never having had weight loss surgery.

5. I know so many people who have died from this surgery either on the table or the FIRST year after, I am horrified. This includes a 30 something year old woman at 300lbs who died right on the table, a friend who was near 500lbs and needed a respirator for days right after and then died only some months after, losing only 60-80lbs, but having other health problems including heart ones grow worse and worse, another supersized man in this case dying only a few months later, who had multiple complications and several others including the most severely diabetic person I ever have known, who required amputations AFTER having had weight loss surgery.

I won't do it, I've had enough suffering in this life, That is what I tell the doctors, and I do think there are legions as to the silent of the real results. A few of the healthier types, may lose a first 100 or 150lbs if they are supersized but the regains are intense.

I've had enough digestive problems in life to know its not something you want to mess with. Life stinks when your digestion has checked out.

I saw this woman who only weighed probably around 260lbs who was otherwise healthy and active get this surgery, and saw her mixing a powder with her coffee to just get it down. I shook my head. So much suffering.

Fat people deserve better then this. Now I am not one of those size acceptance idealogues who denies that weight can affect health, but we need something better. It's like they sat down and thought of the most suffering and torture they could bring to fat people and came up with this.

Yeah I said it.  Has anyone else ever thought this?  And it makes big big money. Think about this tens of thousands of dollars for WLS--what's the average cost, $60,000? half the price of a house, and we don't even have centers that any fat people can afford to go to for help with their weight outside of ones like Duke for the extremely wealthy?

Ponder that one a bit..... I think fat people deserve better.
Posted by Five Hundred Pound Peep at 7:12 AM