Are You Fat Because You Don't Do Enough Housework? 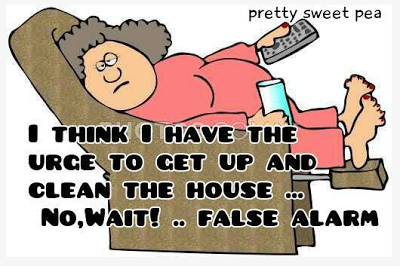 
The obesity study examined what women were doing 50 years ago; managing their homes.

The New York Times recently came under fire for reporting on a controversial study published in the journal PLoS One, which linked a decline in time spent doing house chores to obesity in women. Because the research focused on house work and females only, women around the country decried it as sexist, tweeting their outrage at the New York Times for publishing the article.

“WOMEN: You’re fat because you don’t do housework anymore. (Nice double whammy.) #whywasthisevenastudy,” tweeted Sarah B, reported by Yahoo! Shine. But what critics failed to note was the research was a follow-up to a 2011 report on physical activity in the workplace. 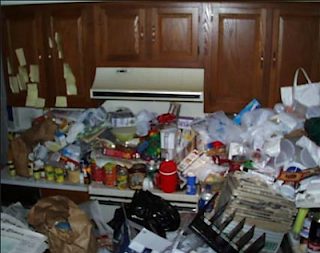 I am BAD at housework, so this article made me worry a little bit. I think there are good fat housekeepers as well as bad ones but sadly I fit in the bad category. Some is not my fault, my body can't do some of what is mandated but as you will see cleaning never came easy to me.

The picture above is NOT of my kitchen, but how would you cook in a kitchen like the one above? That would take literally HOURS to clean! I keep my own kitchen counters as bare as possible. Those are probably the barest table-tops in the whole apartment!

My theory about this, the thin people are doing more housework, since it's easier to move at least when it comes to those who are supersized. The tyranny of housework continues for women. I can't imagine life for women with children where life is nothing but housework and cleaning up after them. I and the husband can eat dinner at 10pm at night [yeah I know not recommended] because I put it off, but if you have kids to cook for, that isn't going to fly.

Fortunately I have a husband who does my laundry for me and dishes but there is some care-taking involved in our situation. I do the cooking and to save money do cook things from scratch, like stuffed cabbage with rice and ground turkey, which I plan to make tonight. But I am so terrible at housework. I hate it!  Housework did not come easily to me even when I was smaller and could move, because of the organizational skills involved. Get up and try and clean the sink, realize you are out of sink scrubber! Get up and try to dust the furniture, oh I need a rag and what do I clean it with? Where do I put these things? That question comes up all the time to the point in frustration I have gotten a giant plastic bin, tossed things into it, but then that usually ends up sitting around for a couple weeks until I figure out what to do with everything in it.

There is always more interesting things to do or look at even when I am housebound that range from writing on these blogs to messing around with my stamp collection or reading.  Cleaning is dull, and when you are poor, and live in apartments furnished in garage sale/estate sale a la mode, you are not going to get the shiny results you see on TV, your old stuff may be less dusty, and dirty but it will be still old  when you are through. It makes motivation hard for cleaning, the results just aren't going to be the same. 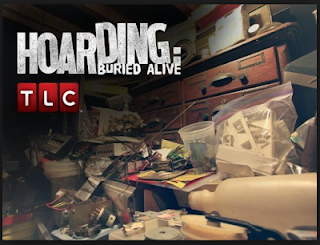 My husband tells me he doesn't want me to watch Hoarders anymore but I still do. He says I get too weird about how I am going to turn into one, and too antsy about cleaning and housework. Why? I relate to those people. They are bad at cleaning and organizing too like me. I notice a lot of them are overweight, and some seem to have severe illnesses where they can barely move around and I wonder if some just got too sick to clean. Of course that worry is on the back of my mind. During my worse kidney stone week, I would drag myself out of bed to shower, and toss a few dishes in the dishwasher but I was not getting much else done, my husband had to do it all!

While I can easily throw away and give away things and the thrift store gets to do a pick-up at least twice a year here, it seems one could become a Hoarder easily. I know Hoarders have more going on regarding severe depression and feeling like they have to keep every item due to a mental disorder, but you wonder why is this growing more common?

My saving grace against outright Hoarderdom, is a snippet of germphobia, where I have to wipe down the kitchen in watered down bleach at least every couple weeks imagining the growing germs and bacteria that could take over and an asthmatic oversensitivity to smells. The bleach isn't easy on the breathing either as last week, I cleaned out the bathtub standing above it with a scrubber I got with a rug cleaner pouring some bleach into it and overdid it and made myself cough and wheeze. Cleaning stinks for me because the only things I can handle at all are watered down bleach, dishsoap and murphy's oil soap, everything else makes me wheeze like crazy, the bleach, I have to use in small amounts. Ammonia, that stuff is so horrid, I'd be on the floor. We take out the trash everyday because I can't stand the stink, that means if I throw away some old chicken, it is removed right away.

However while I'm desperate to keep the germs, outraged landlords and health department--[just kidding] at bay, I could see me slipping into a major housework fail. Lack of money does influence having to stick with broken down furniture and not being able to "decorate" the way I'd like to.  Right now only best friends would be allowed in this place. My housecleaning standards do not meet many people's, sometimes I ask how do they do it? Their houses look like museums! Many of these people have more money then me, but I think of the sheer exhaustion involved. One thing, cheap apartment rugs are the bane of my existence, if I could have smooth wood floors to clean instead of this stubborn dirt magnet called an old apt rug, I would be very happy. Please landlords no more crummy cheap apt rugs! People living in apartments even with expensive rents, to stay out of bad neighborhoods, don't have an extra 100 a month to clean the stupid things. My friend's Bissell, which I used over a course of a week--a normal person could have done it in acouple hours, cleaned a lot of the dirt up but the rug is still far from great-looking.

My body often does not want to do it. It tires me out. I am not good at it, even on a good day. The mountain of stuff seems to pile up. I have spent too much of my life in places where there is simply not enough room or places to put anything. Things are better then the single rooms I was forced to live in earlier in life but it's just too little. This apt has no mud room, no storage unit, and while it has a few closets, I have 20 something plastic bins full of art projects, materials, stamp collection stuff, card making supplies, papers, writing, piled up all around here. Add in 3,000 books, that is a low estimate, and you can just imagine what my apartment looks like.  I don't know what to do with it, frankly.

What my bedroom would look like if I never threw anything away since I love to read everything I can get my hands on.What is that dried up scary looking iguana thing, an old pet? 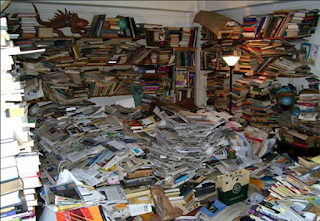 Due to the health reasons, I tried to get a home health aide, but being married and already having a husband that does my laundry, errands and trash carry-outs, I am not considered eligible. Yes I've checked. I also had the thought, well I have to try and do as much as I can as well, to keep mobile, but I am SO BAD at it. I find cleaning so mind-numbingly dull. Even as I sit here, I think I have to go shower, and do something about the tub again, and boil rice for dinner later, and clean up some of these dirty clothes and take my pills, and wipe down the counters. Even on my computer table which has one broken off leg which is propped up by more plastic bins of stuff, I look at 3 pill bottles, our digital camera, an Old Harper's magazine, an used up Energizer battery, my diabetes tester, a neglected bottle of glass cleaner, some postcards, a disc a friend sent me and an old jewelry box, along with the computer and it's necessary parts. When I clean I just don't know where to put anything anymore.

I grew up with a mother who kept her house like a museum, you could eat off the floor, everything was put in it's place. This is how my sister and mother live today but their houses look easy to keep clean with smooth polished floors and shelving and cabinets and SPACE for everything. My family growing up lived in 2-4,000 square foot homes, I have 800 square feet to work with and far fewer resources in terms of buying organizational helps and actual cleaning supplies. I also do have relatives who BECAME hoarders, which include two aunts. Both were very poor at the time as well. Both allowed their trailers to become filled with trash. With that kind of family history don't you think I have a reason for some of my worries? So I've seen hoarding first hand and what it does to people's lives and I am determined not have it happen to me, poor or not. I'm one of those type people where stuff sometimes feels more like a burden more then a blessing. What is scary is we sold off a lot of our possessions for years on ebay to make ends meet so I guess things could be worse.

I have read the helpful websites like Flylady, but then what happens if you go bleach and clean the kitchen down, and then end up so exhausted, that's all you get done for the day? You end up in spot clean mode where the WHOLE is never cleaned. Once I hired a housekeeper for 10 dollars an hour, to clean out my bathroom but then I couldnt afford her for more then a few and I probably needed her to work 20 hours to clean this place out the way I wanted it. Call for volunteers? Impossible, I tried. Professional organizers you have to be wealthy to afford. I make myself to do lists and bumble through the best I can, my husband helps too as much as he can inbetween his own work.

I don't want to be the stereoptypical "messy" fat woman, so this stuff drives me crazy. If I won the Lotto, I know I would get rid of everything that was old and this old rug, and would spruce up everything far more. If anyone has any advice, I am welcome to it. Are people fat because they don't do enough housework? I don't think so, all I know is that I am BAD at it!

Posted by Five Hundred Pound Peep at 8:55 AM