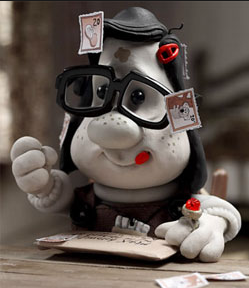 I know what being a misfit is all about, being beyond the stereotypical round peg in a square hole. And its not just the more artistic nature I was born with, my individuality was even misunderstood and rejected by my family. Nerd, Weirdo, freak, spaz, are words that ring in my ears even years later on the playground and off it. Even family friends and others were disturbed by levels of precociousness I held by a young age which included the ability to read by age 3 and half.

As a child I could sit for hours and just read, I would ride my bike to the library and spend hours wandering the rows of books. I was often accused of having no sense of humor. I knew that locker room banter, television sitcoms, cheerleader camp, the junior prom and later sororities were not for me. Small talk bored me. I felt repressed and I was a fat “Wednesday” from the Addams Family comic books from the 30s I parlayed from the library. I grew up being a dreamer surrounded by more level-headed practical types. My fatness was not the most mitigating factor but born into a group of practical and concrete types where dominance and control came first, my intuitive, emotional nature seeking connection with others was rarely understood. I wondered at times if I had been left in a basket on the doorstep.

My sister and brother were normal and fit in easily. My sister, was a thin quiet neat hard worker, she fit in naturally unlike myself who failed miserably at it even when I tried. She seemed untroubled by my crazy schemes and served naturally the role as the “good and obedient” daughter and was the favorite by far. My brother, even being somewhat fat joined in with the popular crowd, joining a fraternity in college and partying with a group of friends later on. I was the odd one out independent of fatness.

To my extended relatives, I was the crazy lady in the attic by age 8. I made little sense to them and they knew I was not the same. My grandmother, aunts and cousins just wondered what made me so different why couldn’t I accept things the way that they were? Why was my nose always in a book? Why did I keep talking about such strange things? Why doesn’t she act normal? What else could a conservative middle American family think of their wayward daughter, fat, insistent on oil painting her way through college? By age 18, I had been cemented with the title as family black-sheep and "rebel" though definitely I wasn't being invited to any parties either.

Oddly it was not rebellion as one sees manufactured in Hollywood, sex, drugs and Rock n’ Roll for the masses but more an intellectual sort that seemed to make people angrier. I didn't date til I was 23 years old, I was a teetotaler. Beyond being fat, I knew I was alone in my view of the world which saw things through an emotional artistic nature. While I could find beauty in the most mundane of things such as the way the light hit a certain vase on the shelf, life surrounded by people who did not understand me at all was very tough. While I did well enough in school, I felt insecure in carrying out the tasks that came effortlessly to my family and all the shaming did not help. I was bad at cleaning, making plans or the practical matters of life. I would even joke to one internet chum, ”I am not a linear thinker”. This alone made me an outcast within my own family even earlier and beyond the weight.

I have had eternal feeling of being an outsider. Perhaps I am the quintessential middle child and advanced into society. Social cues were hard for me in general. They found me overly intellectual, overly serious and just “strange”. My idea of fun is to sit around and talk about ideas for hours, analyzing politics and religion. I would find people like me out in the world as well thank goodness. Such things are hard to admit but it needs to be said to give someone the full behind the scenes look on my story and how being fat in today’s society affected me. I was surrounded by a family that cared most about house cleaning, cooking, autos and yard work. They were not interested in discussing art, philosophy, religion or history. They honestly saw me as a “flake”. Other words to describe me by my parents were “Prima Donna” perhaps referring to my early Bohemian lifestyle, “Heathen” when ever fights about religion came up--this was in the days before I became a born again Christian and I was the seeker type of personality back then, maturity later taught me to shut my mouth and “Hippie” kind of like Cartman’s sneer on South Park “you damn tree-hugging hippie!” My family read Readers Digest and my mother Ladies Home Journal while to me the library was a second home.

My parents were right that when I entered the work world, that my non-conformist ways often got me in trouble. With the exception of my art teacher job where some eccentricity was accepted and tolerated, out in the rest of the world I had to keep my mouth shut to keep from being fired.  Conformity to my disappointment was even more expected in the adult world compared to high school. I would learn this the hard way. Being a weirdo was a not only a social handicap but a financial one as well! Often my father would remind me as I got into my older teens and twenties and I would stubbornly argue against it. “It does matter what others think of you!” “You need to play the part more and fit in! Your personality is just wrong!”  He reminded me constantly that if I was to be myself that the price would be too high. Acceptance was not part of my early experiences. Young people do not develop confidence being told everyday how "wrong" or "bad" they are.

I put it all behind me at university from whatever troubled: there, I would study my lifelong extreme love of art, it gave me hope and my expression a lifestyle which represented hope, happiness and talent. More than a simple major, it represented a radical way of thinking. While the ramifications of a seemingly impractical major worried me, I could not ignore the boosts to my self-esteem at the time. I loved to paint and draw and even into my 40s rarely pass the day without drawing even a cartoon, It was something I was quite good at doing enough to quell the popular gallery’s jibes and snipes against my weight. It remains my primary pursuit today and all around the house lie sketchbooks, some dating back back to age five when I’d scribbled, “I want to be an artist" and learned to draw from looking at Peanuts characters.

My own “interpersonal sensitivity” had been not built from the inside as the world would insist but from the outside from the joking, the expectations and beliefs laid upon me as a fat girl. The lack of acceptance I faced, and rejection as the person I was just made things worse. Combined with my own inbuilt personality my own sensitivity, artistic nature and introversion did not make for easy maneuvering in a world full of too many fat hating clods incapable of introspection who demanded I'd be anybody but me.

It seems society wants everyone to even act the same and tells people who are different even if unfocused, and impractical that they suffer a defect rather than acknowledging these people’s greater creativity and other approaches towards life. Such views affect fatness. People are expected to fulfill the limits of body charts that ignore muscle bulk, bone size, body shape and give a narrow ten pound range for each height to mold themselves into at the mercy of being labeled corpulent. The most symmetrical is said to be the most beautiful, in this case symmetry and matching of type has been carried too far. Bodies are being homogenized through surgery, and reshaped by extreme dieting, everyone wants to be the same. This is happening even in other arenas such as the overuse of Prozac to "smooth" personalities out and pathologizing of every difference.

This was all tied in with being more sensitive than others. This not to place myself in an elite above others for there is a strong negative side for being far too sensitive. Sirens and loud noises startled me. I cried at sad movies. My husband when I thew more blankets on the bed and demanded more pillows called me “Princess and the Pea”. I did not argue, I knew he was right. I was easily overstimulated. Grocery stores with all their colors and bright lights were hard to take.

How fatness affected all of this was important. Along with my mental differences separating me from society, I had a body that was not included in the general scheme of things and which seemed to represent my mental state. Chairs did not fit, Cars were too small. Clothes were not only too small but even if they fit too short for my almost 6 foot figure, often making my knees hurt. The realities of my boxed in mind, felt akin to my body that felt tied down in a world made for Lilliputians.
Posted by Five Hundred Pound Peep at 6:10 AM