The Final Goodbye to Narcs [picture source]
One issue I want to explore here is how the disordered malignant narcissists and others, render a person voiceless and do not listen. One inner illustration for me, is talking to one of them is like screaming at a brick wall. It is a brick wall that never bends, listens and is hard and cold to the max.
No matter what you say they will never crack. One cannot communicate in the traditional way with people who have no emotions except greed and anger. When you confront the hard cold reality that they do not care it is a cold reality but also freeing in that you know you are wasting your time on people, where there is no chance of redemption.

To listen and be vulnerable to another person is something a narcissist will never do. Communication seminars will tell us to mirror back to others, so they will know they are being heard, narcissists are busy looking into others as a mirror to tell them how great they are, not to actually listen to anyone.

I had to learn with narcissists, they do not think like I do. I know my mother and sister do not worry about the things I do or even the same emotions. Neither cry over lost friends, both remained dry-faced at funerals. Introspection is not there, it is closed off. To me their world seems a nightmare though in the fleshly realm with the wealth they are in a far safer place with more opportunities, those really are not used.

I have been considering that I may be dealing with very severe narcissists not your fly-by night histrionic who seeks attention at any cost, but those on the severe side of the spectrum of malignant narcissists who lack consciences. With my mother and sister, they seem to lack attachment to anyone, the inability to feel fear and other things that seriously worried me for years. I even found out that my sister has nothing to do with my brother or his children as well.

As a Christian even, I had to go no contact. A Christian can't dance with evil even if you have sacrificed a would-be inheritance that was your only chance of financial security on this earth and some relief from poverty.  My husband says it's doubtful I would have seen a penny and I agree. It is hard to explain to others but these type of personalities do bring a person this feeling of fear. I think of that book "The Gift of Fear" that informs people when you feel this afraid of someone, it means something and not to ignore those emotions. People do not realize it but I am often afraid to even write about her on this blog, I follow a "feel the fear and do it anyway" ethos.

I am the only person in my entire family who has ever stood up against my mother. Normal arguments do not even occur such as you may see in a family where people are normal human beings and have disagreements and some debates. Watching this has been well creepy all these years and disturbing to the max. They always say the scapegoat is the "truth-teller" of the family, I was very young and know this is some of why I was her sworn enemy from a very early age.

This may be an bad admission, I faltered on my no contact a little bit, and when I got my lipedema diagnosis, sent the original no contact letter I had sat on and not sent for 8 months with this new information added in. Hey I'm not perfect. I had waited 17 years for the vindication of knowing something was wrong with me and pressing on for a diagnosis. So much of the abuse was related to being overweight. I was right, they were wrong. It was a perfect closure to the whole mess and the letter I felt I was holding on to for a reason.

How can I say this but I was too afraid to send the letter when I originally walked away that confronted them with their misdeeds. There is some relief in sending it off, and knowing that everything was said. It brought me some badly needed closure.

"Recently I found out I have a rare illness called lipedema, it is the culmination of 17 years of knowing something inside was wrong, and working for years to find out why my body is so extreme. Hormonal disorders [such as PCOS and thyroid which I have] go with it, and it means ones lymphatic system has shut down [lymphedema is a condition that goes with it] and the fat cells grow differently and larger. It also means being severely obese is not my fault.  My body is full of fluid body-wide not just my leg.  This means that today I thought of all the abuse I got for being fat, the red "big Momma" panties you sent me, the insults, being told in endless ways that I was "unacceptable",  the years of put-downs and being ostracized for being fat, really stand out. Being severely overweight is hard enough but with a mother that only cared about appearances, it was hell on earth."

I feel more concrete now in my no contact. I realize these people do not love me and know this completely.  Observing them all these years, I do not think they love anyone. They do not treat anyone that nicely unless they are there to give them supply. Those they treat well, bring them positive narcissist supply and a good appearance. If it was not for those around me who do love me and care about me and God, I know I very easily could have ended up being destroyed by them. I see myself as a warrior with a battered body, who crawled out of battle beaten up but who is still alive and determined to press on.

In the letter I confronted my mother and sister about the abuse for being fat, their treatment of Aunt Scapegoat, whose story by the way has grown even more heart-rending as recently she broke her leg on ice trying to drive herself to dialysis and many other issues. I knew this was taking a piece of tape and taping a piece of paper to a cold brick wall. That issue is pretty much said:

"I have some things to say to you. I know I will never get any answers for the following because all I have heard for many years, is denials, deflections, and excuses. I'm writing this for myself.   I have to protect myself from further emotional and other harm."

My mother never responded. I'm sure she got it. I know I am in discard and devalue mode now. She is finished. I didn't expect a response. Her mode is never to admit anything and the world would explode if she even approached something resembling an apology. Today talking to a distant relative, she lied to her when this relative asked if she talked to me lately and said, "I don't think she has my vacation home phone number."

My sister said NOTHING about my diagnosis and her response was to complain about her own minor health problem and tell me she wasn't going to "do" this "you hate me crap" with more invalidation She told me "I can't do anything for your medical problems" and claimed innocence for my mother. She made it all about her. My sister has no gratitude for her lovely children or opportunities in life. Narcissism and gratitude don't walk hand in hand.  I told her Goodbye as well.

I am around some normal people now so the meanness of this crowd is so glaring in comparison, just how cold and cruel they are. Tell them I had a undiagnosed rare problem for 17 years and this is the response but I deal with it because it is what I expected.

I probably made a mistake breaking the no contact. I suppose I thought of vindication, and wanting to tell the truth about my obesity and the rare disorder, but the brick walls never noticed me or even looked at me or ever listened to one word I ever said. I kept hemming and hawing about sending the letter which confronted them on many unsaid things, but now they are said, and I can be calm and complete regarding that.

This is the most painful part about being an ACON, the unheard part. The fact you can scream until your throat is raw and they never listen and will never listen. My decision is cemented. One day before God I believe they will find out what they are, even if they would not believe me about it. I also pray for my sisters kids everyday, hoping they are spared pain from having such a severely narcissistic mother. They are healthy and young but I see sadness in the eyes of at least two of them.

There better be no going back now.  I took too much for far too long.  All the patience, time, trouble, seeking resolution. Sometimes quitting is a good thing especially when one is banging their head on the narcissist wall. 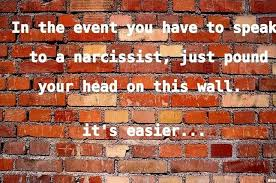