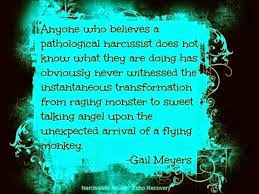 Narcissists keep secrets. Directness is not one of their qualities. Secretiveness helps manipulate people who are kept in the dark. With the narcissist telling endless lies and playing a mad circus director, of course they are going to keep secrets. Their lives are compartmentalized and no one is allowed in to the deep dark cave that is their mind with it's endless locked boxes and rotten piles of muck. Keeping you and as many others in possible in the dark, keeps them in control. The less they tell the safer they feel.

Ever wonder why narcissists only open their mouths about trivialities? Ever wonder when you try to talk to one there is no substance. To the soul-less there is no self-examination or pondering, there is only waiting for your next prey to come into your view.  Narcissists will make a grandiose show of bringing their favorites into their confidence while leaving the scapegoats out in the cold. This is one way they manipulate people to carry out their whims.

When I was a teen, there were times my father would zone out, totally. You'd say his name over and over and get no response. My mother took over the driving, we thought because he was "tired". Imagine there you are a teen, and you look at your father who sits there blank-eyed and not responding for entire minutes. And then later he snaps to it, and starts talking to you. Inside the confusion is extreme. Is he on drugs? Is he ignoring me on purpose? I never got any answers.

I had very little medical knowledge, now advance 25 years later, when I order his medical records to try and find out what is wrong with me after my 400lb weight gain and in his records are information about the continuing problem of his seizures in the 1980s. Why was this kept secret from us?

One day my father told me my mother had a heart attack at work, it could have been two weeks earlier or a month later. I remember her that day acting normal, coming home a bit late and not saying anything. She never told any of us. After all being sick means appearing "weak" and to her you couldn't have that.

My mother never told me anything. She never opened her mouth about anything important. It was "Clean this!", "You are a slob!", "When are you going to lose weight?". Fifty percent of the words spoken to me had to do with cleaning, the other fifty percent was various criticisms. There was no shared emotions, feelings, or even opinions about current events or other people. With others she would bond insulting her various scapegoats and endless work enemies. She never shared any memories of childhood. She never had a nostalgic moment. What mattered was only the here and now. Imagine you know this person for 40 plus years, and they have shared nothing of their childhood memories with you. Can you imagine that? It was very lonely.

I found out the family was in severe debt being a snooping 14 year old and finding papers that made it clear. No one told me though the screaming matches between my mother and father over every little expense was a slight clue.  There was no asking direct questions in my dysfunctional household. There was no rational adult in the house who could sit down with me and explain what was really going on. This just upped the fear equation.

Then there was the time she wanted to force her secret-keeping on those we knew about. "Don't tell your father I bought this", "Don't tell your brother, your father said this.", "Don't tell your grandmother about your brother's divorce!" and so forth and so on. Triangulation usually requires a lot of secrets. Narcissists who wish to triangulate and turn two parties against each other, will be telling lies to stir the pot, they want the two other parties to think that each other is lying and not the narcissist. In this way they basically bomb the relationships around them. No one can share or "get real" in an atmosphere like this. Even now, trying to get any relatives to open up to me, even the few nice ones I have contact with, appears near impossible.

These are some of the secrets that were more innocent, there were plenty more and a lot worse ones. I have caught my mother in so many cover-ups and lies that it is absolutely sickening.  If I dared to write a few here it would floor you. She lied about others, she lied about the facts, she lied about what happened.  People can only hide so much from young people.  I knew they took pills. I knew about other adult things that they thought I'd never figure out.  A few present flying monkeys before they sold their souls to her, still told me a few things back in my early 20s. Her focus on calling me a liar during our last conversations, was just your classic case of projection.

Now I don't expect parents to tell children every single thing going on in their lives, there are things that children can't handle, or are adult territory, but I often wondered what affect this had on me growing up, where I could not trust anything I was told. Where there was no one around to ask questions of. I took my intellectual curiosity to the world of books.

There is no trust in the land of narcissists. I never could talk to my father or mother about anything. My father kept secrets too usually on behalf of my mother. You also had to know everything he found out he would report to the Queen Spider.  She would tell him not to tell me anything.  She was the wall in the way of any real relationship.

Everyone has secrets, it is normal for humans to have a few and drawn out boundaries. We may tell certain people things about our lives and not others depending on how close we are to them but when everything is secret, that's a problem. When people keep life locked up in little boxes for sick power trips that's a problem too.

I realize being no contact, my mother was essentially a stranger, my father too. When you are the throwaway to a family, no one is filling you in on what is going on. There is no "sharing". Narcissists live in the land of lies and secrets. They claim their secrets for their own power.  If you are truth-teller or someone wanting to know the truth, they will hate you. I definitely was hated. She saw me as a challenge in that I could tell when I was being lied to.

Posted by Five Hundred Pound Peep at 10:13 AM