Why You Never Tell People Your Problems 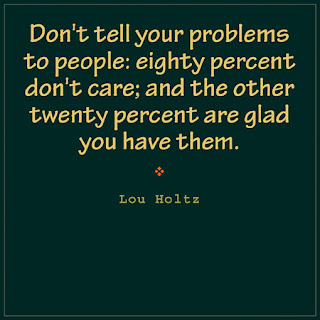 Is this meme the outcome of a narcissistic society?

Why You Never Tell People Your Problems

"Stick with me on this one because it isn't going to seem "right" at first, but if you focus on the angle I'm approaching this topic at, you'll see the point I'm trying to make.

Everybody has problems.  And everybody has friends.  And part of having friends or loved ones is to share your problems.  You need a sounding board, you need to vent, and doing such things are healthy and expected.  However, when you unload and vent, it is usually problems that are not dire, nor insurmountable.  You got a cold, you boss is being a jerk, the weather sucks, whatever, they all have an end and a solution, and are thus surmountable.

But then there are problems that are terminal. There is no solution.  There is only one outcome.  There is no end.  And if there is one, the cost is not only great, but nothing can be done to stop it.  Things like terminal sickness, bankruptcy, divorce, etc.  And it is here you need to be very selfless and think this one through.

Say the economy has gone south and you are imminently approaching bankruptcy.  There is nothing you can do about it.  It is going to happen.  It is outside of your control.
Do you tell your friends about it?  Do you complain to your loved ones about it?

The answer is no, and let me explain why.

Just as you are powerless to stop this horrible thing from happening, so to are your friends and loved ones.  And in complaining to them or telling them about your unsolvable problem, you put them at unease because they are powerless and helpless to do anything about it.  It is human nature to want to help, but if help is just not possible you unconsciously make your friends feel uncomfortable and powerless.

For example, have you ever had a friend whose loved one got cancer, or your friend got cancer him/herself?  And upon hearing the news you don't know what to say because, well, what can you say?  "I'm sorry?"

That's about all you can do.  You are completely helpless and thus have nothing to say.

Worse still, you can exacerbate this situation, with your "terminal" problem.  Because of the severity of these terminal problems, you don't just mention it once to your friends and then it goes away.  It's a terminal problem, it will be with you until it terminates.  And because of it's severity, it is going to be the single largest topic weighing heavily on your mind.  You will want to tell somebody about it, in perhaps a subconscious attempt to find a non-existent solution, but all you will do is drive them further away because you make it so uncomfortable.

Now, am I saying, you NEVER tell anybody you got cancer or that you filed for bankruptcy or your spouse left you?  No, but I am saying once you make the declaration, there is nothing to gain by revisiting your unsolvable problem with friends and loved ones.

Tell me HONESTLY what you think of the above. I have erred greatly in some friendships talking about problems too much. I was always trying to do "right" by this and would try to make sure I was balancing out negative and positive things and that I was being a "good" friend and listening to them too but it seemed I still upset people.

Socially I am failing and upsetting people without meaning to. It's like my cup is over-run with emotions and too much spilled over. Maybe this guy is right about the process I have gone through. Obviously I talked about a lot of problems on this blog too. My blog will continue but the life stuff needs fixed.

Being vulnerable in America society can be tough. Vulnerability means being kicked in the face by the toxics but it can be complicated beyond that. We played several bad hands and well, how long can one boo-hoo over one's bad hand in life that is unfixable without driving people crazy? One friend even told me at this conjecture, I should accept some things and this is true. I don't want to spend the rest of my life banging my head on the wall. I am just going to "BE".

Outside of very few friendships and this blog, I'm talking 2-3, I started going very quiet about a year ago. I knew telling people any problems was bringing me bad things. I didn't go crazy with public and outer circle people but I realized fast even mild statements like "I am on disability, or I am estranged from my this relative" while providing no other details brought bad social outcomes to me.   I had to learn to become more private.

This can be a lesson that ACONs have to learn because we were never taught boundaries and then I realized the social rules I was breaking even as an Aspie. Something seems to have changed in society too where saving face has become even more important.

I actually knew that I had to STOP, and only talk about positive things within many circles and other friends. Some groups I kept enjoying like my book clubs, and more, but I didn't grow close to anyone so it was the activities themselves left to be enjoyed. With other outer circle friends and activity pals, I would discuss art and trips they took and other topics.

I actually quit going to my self-help and depression group recently, because I told my husband, "Look we have had these same problems for years, and we have not been able to solve them. People don't want to hear them anymore." The people who were left in the group were nice people, it wasn't them. It was us. We can't reiterate problems over and over that have remained unsolvable. People get frustrated with you. Also we are allowing a point of vulnerability there. This guy is right about "terminal" problems in that there are problems in life which are not solvable.

There's a little bit about that, which bugs me, there is something in American society where only success matters.  At the same time I was freeing myself from the narcissists in the family I was coming out of some spiritual abusive stuff too and leaving a church I no longer agreed with.  I had this drive in me to "fix things and figure them out". Some would call that rumination but they did not understand the thinking or motive behind it.  They didn't realize as I was getting away from my abusers, the emotions and things I didn't talk about. I'm the one living in this body and brain. Sometimes I get tired worrying about what are the right and wrong things to say and tiring of the endless social and other errors. It's enough to have one become a hermit. Socially I feel extremely stressed lately outside of my marriage and few relationships.

I often had the thought I was tied down to my problems even when I didn't want to be. I could only hide so much. When I didn't come up with the socioeconomic and other goods, people were angry. 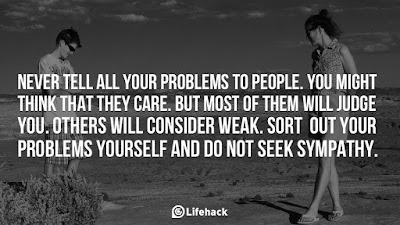 One thing that worries me, is people do seem to judge me so much and without reservation. I feel so judged lately it is killing me. So many seem to focus on my imperfections and maybe part of it is my fault, because I allow myself to be too vulnerable.

I desire to be close to people and open my heart too wide. I think of things I could criticize in people but it is not something that occurs to me to treat people like this in turn and start taking them apart piece by piece and telling them what they are doing wrong. One day, I cried to my husband, he is someone I can be absolutely real with, and said,  "Why is everyone so much into correcting me?" Perhaps it is my fault, they have taken that approach towards me.  If we open the door to discussing problems, some mean well and want to "fix" the problems, so maybe this guy is right we are only frustrating some people and bring trouble to our relationships. We open the door to some bad stuff.

Yes, I consider this a negative societal trend by the way, that people no longer can share and be open with others. Everything seems to be a competition nowadays. Learning to deal with the reality and world we are stuck with, is not easy.

Even with the low contact relatives, I started telling myself, keep your mouth shut about anything "negative." They can't fix the problems with your mother or sister or the other narcissists. With the niece who later parted ways from me I said as little negative as humanly possible. I can't figure out if I said too much or if I simply became too boring and superficial because of this. I slipped up the other day with one who was playing flying monkey, but this is the general rule I try to adhere to. I am not even sure there is even a "relationship" with any of the "nicer" relatives.  The well was poisoned long ago, I know that part is not my fault.

So much of life for me anyway is suppressing myself outside of writing on these blogs. With some "friends" earlier on, I was doing outright censorship and repression of my emotions because there was so much bad and scary stuff especially as I was going through the no contact process, and I still failed and upset people. Some were toxics but they used the vulnerabilities to hurt me. Isn't it a bad sign when you have to start to second guess everything you say to people?

Maybe I appear "weak" to others.   I can't fix endless problems and the some of craziness spilled over.  All the expectations and demands of this world clashed with my reality. I need freedom from the bean counters, and self improvement people.

The "bright-sided" stuff went from being a muzzle to ball and chain and a muzzle. There is this bad feeling of feeling like one is being forced underground where you must hide all your problems [emotions or true self] or suffer the consequences. I always fear that relationships where I must start censoring are doomed for failure. Some seem to get angry at anyone who shows too much depression, or fear or pain for their standards. Why is that? That's not me. I feel kind of beaten down by people telling me what is wrong with me. On my end, I'll be careful of not dumping too many problems on individual people but socially I am beyond exhausted. I wish I could be open without someone using it to tell me I am a "bad" person.

Tell me what do you think of what that guy wrote. Do you struggle with wondering what you can talk about with people anymore? Do you feel uncomfortable as an ACON in this world? Maybe I worry about what others think too much. Maybe I don't. Maybe it's time to go hide in a cave or something. Well I will keep blogging at least.

Posted by Five Hundred Pound Peep at 9:52 AM