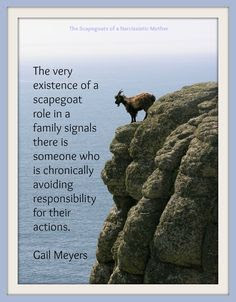 [some language warnings on this one, I am not perfect]

From a support board, I frequent:

I've written about my Aunt Scapegoat dying, and I am on fence about going to memorial service and wrote about that since several narcs would be there, I have been NC with for three years.

One thing I noticed with this aunt is she was squeezed into labels and molds given to her by narcs years and years ago. She was a woman on dialysis with severe disabilities but was seen as the this life long "rebel" and "black sheep" because she smoked some pot and drank a bit in the early 1970s which was what all her peers were doing at that time. It occurred to me even though she was 60 years old she was never allowed to escape the bad labels put on her and never able to live down how she lived 25-40 years ago. She died at the age of 60 and they twittered on about crap from 40 years ago. They treated her like she wasn't even a human being outside of a couple cousins, with her own dreams, aspirations and more. This is a fate I feared and was one of my main motivations to cut contact and walk.

For example one cousin posted on his Facebook that she was a "rebel". IMO she did not rebel enough and tell the narcs to take a flying leap which is one reason she never left home and ended up under my mother's guardianship. She never ran away. There are times I wish I could just disappear, me and husband and go poof! I hate the narcissists knowing where I live.

My brother told me the day she died that she was a "black sheep". I got mad and cussed him out as I admitted and said, "The entire family treated her like sh**, all you did was buy all the lies."

I actually cussed him out some more, "The family are never going to own or control me like she was"
I feel they are trying to do the same thing to me. They did everything in their power to cut contact between us for years and the depth of their lies have come to full fruition to me. The other day I was crying my eyes out about this but then it should be no surprise to me. The depth of their evil has been fully exposed to me. When they lied to me, about her hating me and probably vice versa, this showed what absolute snakes they are. Maybe the mail was intercepted. Did she ever see my holiday cards with full letters in them during the early 2010s?

I feel like they are trying to shove me into the SAME life-long box, and I realize they SHARE the SAME OPINIONS about ME. She died never breaking away. I broke away but NC has been hard for me. I LOST just about everyone, and now I have on my conscience never seeing or talking to this aunt again but had no other choice for my own sanity and well-being. Even worries about my brother dying before I see him, have cropped up for more feelings of lost and guilt, but then where was he this last 7 years? He was more busy spending thousands on Christmas gifts, then driving up here. He told me on the phone, he was going to see me FIRST for once, but then he got sick. There was plenty of years before that when I asked. Has he ever worried about me dying before seeing me again? Remember how bad my health is.

I'm 40 something years old and they still want to put me in the same damn box, they put her in for 60 years. When I saw the way they talked about her even after she DIED it made me ANGRY. This was on Facebook and on phone with my brother. "Rebel", "black sheep". The same labels foisted on me. My no contact was about walking away from their labels and becoming someone else.

Oh and by the way, she is the first one the rich family are not burying with a full coffin funeral [Catholics against cremation] with a tombstone in the family plot next to her mother, a sister and two brothers, but cremating with no funeral and a nebulous promise of a "memorial service" THREE MONTHS after the fact. My brother claimed to me my mother said, it's because she didn't go to Mass and was an atheist.  I left the Catholic church in 1987, with one and half years back in leaving again.  My grandmother quit going to church in 1987 and was buried in the church graveyard in 2007.

So that crap I noticed.

Outside of one cousin with a conscience and his brother and their children, just about all of them make me sick. With my brother, I told him it's time to piss or get off the pot, either you start seeing what my mother really is and stop being a mind slave to her money or I'm done.

I have realized with horror, my own situation is FAR MORE PRECARIOUS NOW. I hope this makes sense. The family fed off her like vampires. Do you all think I am paranoid to have those thoughts or do you understand.? When one feels "afraid" to be in the same room with people, the book The Gift of Fear would tell you to say the hell away.

It is occurring to me outside of two cousins with consciences and their kids where I have distant Facebook contact, that with the rest they have no interest in any real relationships one on one outside of the family system. I tried to form one on one relationships with others since I went NC with the main narcs, and it has failed.

I hate this feeling of helplessness, and like no matter what I do, it's a lose/lose situation. I realize having feelings is a detriment in being treated like a human being in our sick society and sick families like this.

The sad ending when it comes to my aunt will always stay with me. The spiritual struggle of dealing with evil winning at least in this world, brings me a feeling of inner sadness I'm not sure will ever go away. I'm "losing" too even though I've broken away. I'll be the one sitting alone but then I was always alone when it came to this faux family anyway. I have mourned for years even long ago when I was young, seeing what was happening to her.
Posted by Five Hundred Pound Peep at 7:10 AM