Family as a Sacred Cow 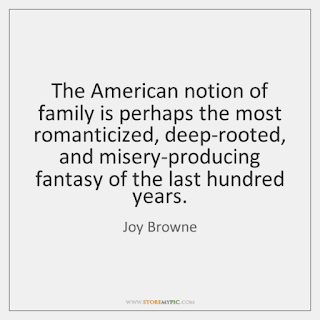 I hate the word FAMILY.  Like Henry Rollins, rages about his Dad in his NSFW spoken word act of the 1980s, Family Man,  I spit out the word "Family" like it's a cuss word. It's not a positive thing to me, just read this blog. Even at my UU church, which means well in it's celebration of both mother's and father's day, I stay home. Family is like a religion in itself.

Many of us figured out religion is a sacred cow and we left it. I think the same about family. Not all families are bad, and maybe some have their own happy families but in this society, family is raised on a pedestal, and made to be something it often is not for many people. We are told Mom, Dad and apple pie, and that every home is a loving safe haven. Every church I went to or visited promoted "THE FAMILY TM", as the most important thing, which is ironic given the leader they claim to follow never had a family of his own and seemed be at least low contact with his family of origin.

Family is like a religion almost, where we are given these idealistic pictures that simply don't hold up. My own family history was abysmal, I am no contact from almost the whole lot, religion played a role when I left my family's church at age 17. Going full no contact was a very positive decision for me. I have no regrets. According to the mythos of society, I have broken every rule in "going against family".

Like religion with it's false promises, we are told a "story" about family that does not measure up. I wonder myself why DNA seems to in many cases bring no cooperation or love or understanding between people.Why does it work for some and not others? Such a thing is a mystery to me. DNA seems to bring out cohesion among some people and hatred among others.

The family often is not a crucible of love but one of danger with domestic abuse, child abuse, divorce, martial rape, scapegoating, and crimes of violence. If anything while some bad families are shown in literature, mostly family is romanticized. Father is all knowing, kind and wise, Mother is strong but nurturing and gentle, ready to bring you biscuits and a warm blanket if poor, or ready to bring you some tea and nursing care in a bed with clean white sheets, if wealthier. The Dads on the Brady Bunch, Father Knows Best, Family Ties, always sat down and discussed things openly with their kids and worked things out.  Siblings are shown as having each others backs, and as support for each other through out their adult lives. While some people win the family Lotto, and get great people in their lives they happen to be related to, many do not. Family dysfunction and danger are the reality for many.


Family systems are often part of the control system as much as religion and the majority are run on authoritarianism. "Family" is defined in a certain way too, which ostracizes LGBTQ people, the single, and the childless. Families are utilized for social control, focusing on conformity, and compliance with social norms. In Western culture especially American culture, children are pitted against parents and vice versa. Some even say it is wrong for a parent to be a friend with a child. Why? I could have used a couple friends instead of living with two "enemies". While some cultures focus on cooperation and learning as prime directives between parents and children, this one focused on "helicopter parents", "discipline" and "obedience". Guess which cultures probably have happier relationships between family members.  Also look at the competition of our society, our families have become competition clubs where the "winners" look down at the "losers". Is the family a cell in the matrix of control with religion as an overriding control mechanism?

One thing every ACON that goes no contact has to do is ACCEPT THE REALITY you have been given. One has to rip the rose colored glasses off their face and take a look at what you got. You may dream of Hallmark moments, reconciliation or redemption as show on television but if you are dealing with narcissists it's never going to happen. The myths, messages and lies about our family in this society is something every ACON who wants healing has to contest. Not every parent is loving, not every sibling cares. Some of us end up with roulette spin of bad people who care nothing about us.

It can be hard even for a post no contact ACON, to see how family is constantly shoved down our throats, one of the worse is that it is assumed that everyone has one. This is kind of damaging in an era where there are more single and childless people then ever before. Some people are exploring the ideas of found families, friends you turn into your family because DNA has been proven to be limited in it's ability to bring forth compatible personalities and peaceful relationships. Perhaps family is just a social construct. We know that human beings weren't just limited to nuclear families but once had fuller social circles in tribes. Definitely among the religious right, the change in the definition of traditional families is giving them fits.

With my husband I have told him maybe mankind needs to evolve beyond families. it is a biological prison. We don't have children in our case-- He laughs, we can have these interesting off the wall conversations and says, "What do you want people living in communes with numbered uniforms?" and I joke and say "Yeah that would have been better!"