Thinking About Modern Life and Small Towns are Better! 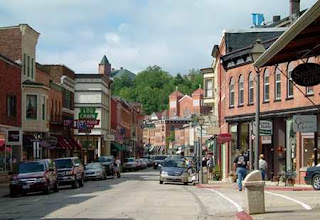 Today I saw this article...

"A Glimmer of Hope"

Over the past several days, that is exactly what I had the privilege to do. I have often written about how the "America" that so many of us love is fading away, but in many small towns throughout the United States that "America" is still very much alive. The truth is that there are millions of Americans that still place a tremendous amount of value on God, family and country. My wife and I are accustomed to big city ways, and so we were amazed at how friendly and how open the people that we encountered during our travels were. A lot of times the elitists that run this country look down their noses at those that live in rural communities and small towns, but the reality is that those are some of the greatest people this country has.

I agree with him. I got to live the small town rural life, and I miss it quite a bit. I visit as much as health allows and have kept in touch with friends there, but I will say this being circus lady fat is far easier in a laid back rural mecca, then in our go-go cities where things are far closed down, impersonal and everything about matching the status quo. In fact recently while things are never perfect for those in the highest stratospheres of weight, I was spoiled while living there. Big cities are far harder on the very fat, trust me on that.

Seeing Amish women at the library, is a bit nicer then walking down the street wondering if you are going to be mugged. Hey I can't run, remember that! OK where I live presently is not THAT bad, but it is far more urban, and I don't think I am going to get over the culture shock of rural vs. modern urban anytime soon. The connections are not here even between other people. Life is so closed down. When I was out at the local suburban large grocery store with my husband, I said, "What is with these people they do not look like they are shopping for groceries, but being herded into a prison camp, the expressions on the faces were so vacant, so depressed, no one smiled." OK I know I'm not the most perky person out there but I at least smile once in a while. I said to husband, "Do you realize while we were going about shopping, smiling and joking a few times, that we did not fit the norm?" He said, "Yeah I noticed too." Sometimes I think my old small behind the times town, has ruined me for many other places. Not to say things were perfect there either, the economy is doing even worse things to rural areas, but it really all made me think.

My ten years escape from the big city where I worked in social work with troubled teenagers before I was disabled immersed in the worse aspects of big city life, public transportation and work in the worse ghettos and all, to a small country rural town saved my life. I really believe that. One thing endocrine collapses brought on by stress, removing same stress helps.

Economics forced us here, and economics are keeping me here. Some said many your nostalgia is misled, but I know when I was back couple months, returning to the peace and quiet and friendlier people actually brought tears to my eyes, of HAPPINESS. So when the author of the link above writes:

My wife and I have also found that people in small towns are so much friendlier. Everywhere we went people were saying hello and were eager to get into conversations. We ended up talking with one hotel clerk for 15 to 20 minutes and he shared with us much of his life story. He was a real "salt of the earth" type of guy and it was interesting to hear his unique perspective on life. Every summer he makes jam and sells it in the hotel lobby and he encouraged us to stop by the next time we are in town to get some.

But he was not the only one that was extremely friendly. People were eager to talk to us and were genuinely interested in what we were doing wherever we went

I have lived that, and it was interesting to note that the people talk to each other more, there was more sharing. Now every area including the rural areas are being impacted, economic changes stripping away at these things, serious unemployment, Walmart having stripped many small businesses clean from our small towns and severe societal problems with meth or what have you, but I have lived the difference between a giant metro city, large cities and a small rural town, and would take the small town over the others any day. In other words in my early 30s, I got glimpses of a life, that seemed far far better. Where there still seemed to be some meaning to life beyond "fitting in". In the smaller places, there still are vestiges of what the Bowling Alone guy called COMMUNITY.

Call me nostalgia, nuts, not in touch with the times, and maybe you escaped your rural town and would never go back, but all of my experiences have led me to see these things in a differ net way.

I think America is getting fatter because the social connections are withering, life spent at desks and before screens just isn't as active of a life where people are together and doing things. Stress is far far higher and its not the acute stress of being chased down by a wolf or bear like maybe a pioneer would have suffered, but more acute low grade stress that may even take a greater toll. We do not have the same social contacts. Even if one keeps in touch, and visits people or gets visited, living far away from everyone you care about takes a toll. Some say "Move Home" but for many there is no home, everyone has cut loose to the ends of the earth. I found myself saying to someone the other day, DO WE HAVE ROOTS ANYMORE?

People now instead of finding meaning in life via God, or fellow human beings, family and having a niche in society no matter how small, are being relegated to scrambling to the top of the trash heap, trying to be the biggest, baddest, richest, whatever and everyone that fails to get to the upper tiers, is now called a "loser" seen as half a human being. My experience being disabled, has told me that happens to many folks out there where social isolation grows and things get tough. They get cast aside, it is scary to watch. In a world that grows more dog eat dog, things get tougher.

I know to survive today people have to work hard, I worked 60-70 hours a week before I was disabled so I get that piece. And look at me, our household had to move to economically survive rather then end up on a relatives doorstep. But are we all losing something? Aren't many things being lost as everyone gets squeezed from the top? If I was 20 and healthy again, I would take up organic farming and "drop out", my friends shake their heads, and laugh, you always have seen so many things differently fivehundredpoundpeep but it's true. Lets examine this life style of soul-less strip malls, endless traffic jams, go go go tasks and busyness, crazy work hours and living far away from those we love. Sometimes I think the Amish have to be laughing at us, who needs it all?

At one recent group I was able to get to, because the weather cooled down, one lady said "No one works harder then Americans now". I couldn't tell if she was proud of this, or despairing of it. Yeah we do out distant Japan now.

Remember in the 80s, when we got told they were dropping dead of heart attacks they worked so hard, well Americans [well those with jobs] are now outdistancing them. I've seen myself the destruction of LEISURE for people since the 1970s. I don't blame the people who have to work so hard, I remember even once working 4 jobs [nope I am not making that up, they were all part time] to keep a roof over my head but life is losing something.

One thing about modern life, everything seems to be becoming so dead, so closed down, so vacant, so CONFORMIST. Maybe something is off about someone middle aged, wishing they were born 50 years earlier, but modern life is getting weird. Everything good seems to be eroding. The American dream is dying. I am scared for the future that awaits our young people.

I do try, I think "I am disabled not dead". Even if a lot of time, I am housebound, I go out and get involved in poetry shows, have had acouple art shows in the past years, even trying to connect with the vast array of the more disconnected people in these parts, visit the too far away relatives who all live in different areas when weather is moderate and my health allows it.

But I think standing outside of the busy circus of life where I am a bystander I suppose due to my circumstances from afar, has brought many different questions to my mind. I wish more people would step back and question things. With the fat question, environment counts a lot and our environments aren't so good anymore.

Posted by Five Hundred Pound Peep at 10:34 AM