My Brother: Trained By The Family System 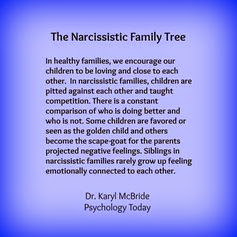 One thing a scapegoated ACON may come to a conclusion about is there is no escaping the role the narcissistic family seeks to imprison you in, unless you flat out walk away. It is hard to understand this, how embedded you become like your foot got frozen in a block of ice. While my Aspergers can at times make me feel like I am talking to people through a wall of glass, this forcing of the scapegoat role, made me feel like I was hidden behind a wall of iron.

Many scapegoats will attest to how an ACON is not seen and how even an entire family system will only see you a certain way no matter your protestations. When you go NC and get that clarity being away from them, you realize how terrible your treatment really was. I am realizing they ALL are making me unhappy and I suppose only other ACONs could understand this and how this plays out.

One thing I realized about my family is for years I always felt invisible, and like they weren't really listening to me. Perhaps some would say it is immature to still be seeking that attention, but one does face the damages done when attention and love come in very short supply in one's childhood. The emotional scars need work to overcome.

Over the last year I realize one thing I bear is feeling like I do not belong anywhere and like I am invisible to other people. [except my husband and friends] To be frank, this is how I was treated by the family for years. My needs [even severe medical ones] were always put last, my parents made sure of this and trained all the others to treat me in a hugely dismissive way. This became normal among too way too many people and have seen it in all of them aunts to this brother. One thing I will warn if you protest this once you wake up to it, with the enablers and flying monkeys it makes not one bit of difference.

One thing I have noted with a few family conversations as of late, is there is a false myth being spread about me in the family. I can almost hear my mothers words through the mouths of others. It is scary how that happens. Her sneering words delivered through messengers. Just like the cousin recently insulted me for being disabled,  my brother too, pounded the whole "you get to stay home and lie around" theme and told me how "busy" he is constantly. This tells me what exactly has been said when it is being repeated among everyone she talks to.

I only talk to him once every two months. What do both have in common expect they have been talking to the head narcissist?

I have been more patient with my brother  and consider myself now on very low contact/protective status with him because he has told me [paraphrasing], "I don't care what Mom says you are my sister and I love you" but lately I am noting some of the actions aren't matching the words. Why doesn't he ever want to visit me? Why doesn't he seem to share my same angst over the time that has passed?

He lives far away from her but he is someone she can get information about me from. In regards to his behavior and words, what am I to make of the comment, "Send me a 1000 bucks so I can visit you!" when I said, it's been so long since we have seen each other. He continued with constant exhortations about how busy he was with his business of selling candy with teenagers from a van.

He knows I have no money but he would make a way to visit my NM except she recently went to go visit him, essentially canceling his visit to the state I and the NM live in. [I live in the same state as her well when she isn't in Florida but not the same town or area]. The relationship is dying via attrition, I have not seen him in person in 5 years.

He is a relative I care about but the hurts are adding up. There is never any loyalty for me among any of them. Pleasing my mother first and foremost comes first to all of them. I suppose he knows what side of his bread is buttered.

He told me my mother was going to visit him and she did. Later I had told him it would have been nice if you could stand up for me. He could have done so with no cost to himself but her lies are never ending. He wrote to me, "Mom was just asking how you were doing. I guess she still doesn't get why you did what you did. Or rather she doesn't want to bring it up." That doesn't surprise me, she had this masterful way of making me look like the guilty one always before all other parties. My brother was told "Why" I did what I did several times.

He went on to tell me that my mother told him, the aunt and cousin I wrote about recently didn't have any pictures. That was a flat out lie. The aunt and cousin even described pictures to me with exact colors and scenes. Sadly it seemed he believed her instead of me.

My mother is working on him steadily, the impromptu visit tells me she wanted to make sure he did not come to visit our state as she rarely goes down there and she decided to do some new teaming up against his ex-wife to gain more of a hold over my brother. His divorce is 7-8 years in the past as my brother went to court over a visitation issue.

One thing about my brother's ex-wife, is she was another scapegoat to my mother. My mother ripped her to shreds every chance she got from the wedding day to the present day. At family dinners and get-together we would hear the many sins of the ex-wife, with every word of hers denied and discarded. She became almost a monster among the family. "No one is as mean as ****! No one is as stupid as ****!. No one is as crazy as *****!" People who had never met my brother's then wife would hate her without ever having met her!

Today to be frank, the whole thing disgusts me. In my opinion my mother helped to break this marriage up, via her hatred and smear campaigns. My brother's ex wife, could do nothing right, she was "white trash" to my mother. My mother had this way of making her seem to be so evil incarnate, that every other person too jumped on the hate bandwagon.

The marriage imploded, I believe over my brother's failure to defend her from her wicked mother-in-law. Not to say she didn't have faults too, but obviously this was a warning for me about what was happening to me behind the scenes.

My brother told me, "My ex-wife doesn't like anyone, she isn't going to believe or listen to Mom!" I responded "Why should she? Our mother trashed her night and day for years"! He told me his ex-wife trashed me. I already knew that. They all did. They smeared me to her. My mother couldn't dare risk an alliance between me and her! Another relationship destroyed by my mother!

Hey with all the criss-crossing triangulation lies, the entire family operated via the trashing of people and bonding over destroying others. It continues to this day. They love to put down people who have failed to get good jobs or make money even though they help some with connections, the latest victims on the chopping block seem to be my underemployed or unemployed cousins who still live at home in their mid to late 20s. It probably would surprised those three how much I have defended them.

Hopefully their own parents seem to be more the lost children types [quiet and not rock the boat types] and not outwardly malignant as so many in my family. My brother even commented on how they have no jobs or are underemployed. I told him, some of the connected ones should help them get an entry level job if they don't like it or are offended by their circumstances.

Some things struck me from these conversations:

My brother is trained by the family system. There are things about his character that severely worry me and this has only gotten worse with the years. In this case, unlike the ice cubes he does have some emotions and shows affection to his children.  While there seems to be some feelings of affection that are mutual between us, my mother is working actively to destroy them. I warned him of this, and also how she is "fighting" the ex wife to manipulate him. From what I can tell he did not listen and it was that perpetual feeling I had of always talking to a brick wall while talking to my family. Anything that took MENTAL EFFORT, like looking up lipedema, or narcissistic personality disorder or even just thinking about something was never done.

The engineered dramas via my mother are disgusting. There is no way, that she should even have contact with any of her children's ex-spouses, [I never have been divorced in my case] but she has contact with every ex-spouse in family and even in one case an ex-girlfriend from 20 years ago of her own brother. This is crossing major boundaries. She should not be battling an ex-wife 8 years after her adult son has divorced her. If she had normal loyalty to her own children and boundaries, there would not be contact with exes across the board.

These narcissists really are whirlwinds of destruction. They all are afraid of her, and they all seek to please her no matter what. This controlled acquiescence she has from so many parties is awe- inspiring. I grew up with this where my mother was never to be disagreed with by anyone. The only one who dared outside of me was my brother's ex wife. At least she had her own family to run too. Even if her family was troubled and far from perfect, her mother loved her from what I could tell.

They all preach the party line. No one ever deviates. If they deviate for a short time, she makes sure to take care of it. My brother basically had withdrawn from our earlier discussions about my mother's affect, about her treatment of others. I was cemented as the "problem" and the "trouble-maker" yet again.

Some of my latest words to him included: "You all allowed her to throw me out and treat me like crap so I had no choice but to walk away for self respect. You're a bunch of enablers."

Didn't faze him one bit.

I know nothing I ever had to say mattered to any of those people. I love my brother, he is one I have some affection left for, but I worry about it being trounced out like fire, stampeded under narcissistic loving and enabling feet. What to do? The boundaries of asking him not to even tell her he has contact with me didn't work.

I care about him enough, I am not NC with him though I added the aunt and cousin immediately to the NC list, but my door is nearly shut, with just a crack open to protect myself now. So many people, so many relationships disconnected. So much voicelessness. Who wants to hang out with people who treat you this way?
Posted by Five Hundred Pound Peep at 2:24 PM