My Walker Got Stolen 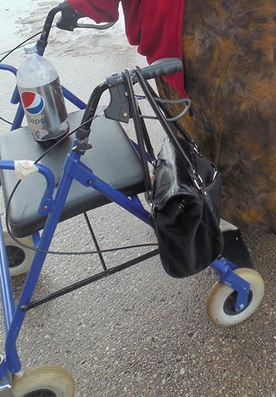 It pours when it rains does it not? You know you are in a bad neighborhood when your old walker gets stolen.  We went to buy cheaper food at a local market next to the ghetto. My husband accidentally leaves my walker standing by the car when I rolled it to the back of the van and we drove away. I thought he had put inside the car! Maybe we are both going senile from stress!

Anyhow we went back to get it and it was gone! Some people stole it within 5 minutes of it being left! Talk about those without a conscience! What next stealing someone's crutches or motorized wheelchair? Robert Putnam of the book "Bowling Alone" would call this a failed community with lack of social cohesion. I learned my lesson, no more going to the "bad" part of town for cheaper groceries. We may get mugged down there next.

There is a sense of violation when getting robbed that is hard to describe, it brings burning anger inside. This is not the first time I have gotten robbed, one of my boarding houses was broken into the one day the house dog was away at the vet, that guy stole everything he could get his hands on. That included my bead collection and jewelry I made in college. Others in another city tried to rob me but failed. There are many times I escaped with my wits and sheer luck, but here losing situational awareness due to the combination of stress, and overtaxed lungs due to growing heat where I bordered on being housebound, was a bad combination.

The wheel is ready to break too so they may get theirs when it breaks off and they tumble over. I was thinking of retiring it but wanted to get the most complete use out of the walker because my insurance only pays for one every 5 years. I had a new one waiting to be used Thank God. I actually taped a sign on our dashboard, "Did you remember to put the walker in the car"? so this does not happen again. The Diet Pepsi is my husband's, I can't even drink that stuff without getting acid reflux.
Posted by Five Hundred Pound Peep at 9:09 AM