Useful Idiots for the Fat Gulag 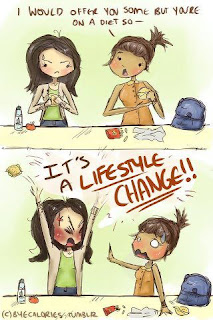 I felt like what I trying to convey whooshed over their heads. There were a few thoughtful ones who seemed as if they were getting it, but one overwhelming theme I saw is they do truly believe if one eats a "healthy diet" that they will automatically be thin. In my world this seems like magical thinking given my experiences.  I have always advocated people eating as healthy as is possible. I believe I would be dead if I ate like most Americans. In fact one question I have asked is how are so many so thin while eating total crap?

In my own life, the whole "Eat Healthy and you will be THIN or at least average." messages seem like a cruel joke from the gates of hell. It simply has not applied to my life.  Of course some may say, You are one off, with the severe PCOS and stage IV Lipedema married together and you did lose SOME WEIGHT--the 200 down from the near 700 peak but how many millions of others are told "Eat healthy and you will be thin" and it simply is NOT WORKING?

By the way this does not mean I am giving up "eating healthy". If I free-ate, I would be dead from the diabetes alone.  There would be no regulated sugars. If I ate a greasy hamburger, my urologist would be seeing me for the giant kidney stone within the week. I can gain weight at the drop of a hat, and I have to be so vigilant, it would drive most people crazy.

I do not believe every thin person in the world is a closet bulimic or having to starve themselves every minute. They eat their two or three squares a day and live and are happy and their body burns off food and life goes by with ease. They are not having to beat themselves or starve themselves to be thin. Some may eat healthy but others eat badly. Some eat well and have occasional treats. In shock I would watch thin women have cookie parties and fix brownies and foods I never could dream of. Of course their bodies work different from my own.

The posters at Fat Logic all seem to believe that people are all fat now because food is plentiful, but there have been plenty of times in history people were more prosperous and had food, and did not fatten up like people are today in America. Japan is a wealthy society where they have plenty of food. If they stay away from Western incursion, maybe they won't fatten up. In other words eat what they have and avoid American fast food.  Sure most societies had times of plenty and famine but wealthy societies have existed before. By this logic every wealthy person in past history would look like Henry the VIII and this is simply not true.

"The reason we're getting fat is that our lives are a never ending gravy train of times of plenty and the times of hunger never come any more. The culprit isn't a big conspiracy it's the industrial revolution. We're just telling people that we have to be vigilant now and not give into these primal urges and crappy feeding habits."

Even this commenter refers to "primal urges". So do human beings need time of famine to be thin? Why are there thin people now then? Given weight loss and nutrition are so actively advanced in the USA, does "crappy feeding habits" explain all the obesity? I simply do not see all thin people eating perfectly healthy and perfect portions of food, this is one myth too. 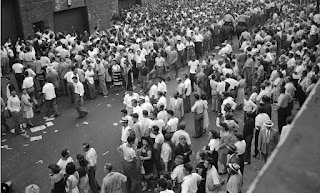 [picture source]
They truly believe the industrial revolution fattened everyone up? Well if you go and look at people in the 1950s even, their are far smaller and thinner then people today. I even have noticed this watching TV shows from the 1970s. Keith Partridge is wisp-thin. I always have believed something more is going on. All the growth hormones in meat? Changes in our environment? Not everyone was behind a plow in the 1950s and 1970s.

One thing I kept bringing up to them, is we are looking at 40% of the population fattening up. Is this 40% of people who are gluttons and lack some personal quality such as responsibility? I saw that theme in their answers over and over. Even as some sincere scientists and others expose that the diets are not working they cling to their mantras like a religion. Weight loss is guaranteed if you eat less and move more. This simply isn't happening for millions of people.

"Eat less, move a bit and one will lose weight. My "conditions" and "genetics" went away with a healthy diet."

I believe most of these people are some thin people who lost 20 or so pounds and otherwise had working bodies that operate along the normal trajectory. While a few had empathy most did not. They stuck to their stance, that all fat people are overeating pigs and that people in our society are fattening up because they are gluttons and "irresponsible.. I did raise the question as to why great segments of the population are even "wanting to eat" so much? This question remained unanswered. None of them could answer it. It was a sincere question. Ironically I showed them that caloric intake has recently dropped but obesity is still increasing.

But none answered that question. Here is where I felt some things I was saying was "whooshing over their heads".

Obviously telling people to "eat less and move more" is failing to solve the obesity epidemic. It is failing to turn fat people into thin people.  I believe there will only be more failure when it comes to obesity since these things are adhered to like a religion. Very few are getting to the root cause. Everything remains at the surface and goes no further. Focusing on obesity as a wholly personal failure of will is failing all of us.

Update: I was banned from the Fat Logic Reddit board. Wow they move in a hurry! I am noticing their latest thing is mocking someone else with lipedema, having little knowledge about lipedema and how fluids work in the disorder. Some may ask "Why bother with these jerks at all?". I did it to show they are indeed "useful idiots" and sadly it shows the level of brainwashing about obesity and related disorders.

Posted by Five Hundred Pound Peep at 7:26 AM