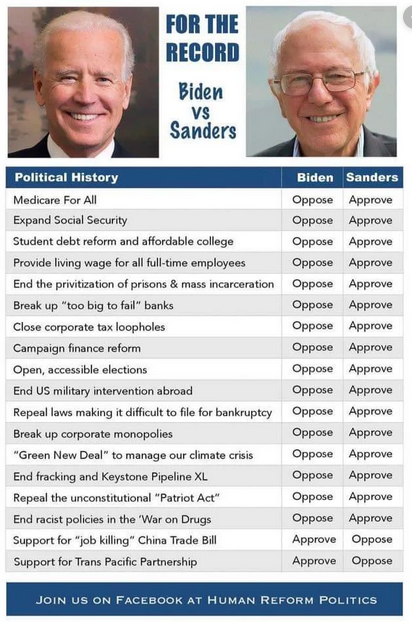 The DNC keeps shoving establishment people down our throat, Biden being the biggest one.It almost like the DNC wants Trump re-elected. I understand why Bernie made the choice to work within the two party system, we know without fail they close the third parties and their candidates out.


I used to be into conspiracy, you know the kind that says both sides work together. After I deconverted, I was able to assert myself as a progressive.

However sometimes I still think of that conspiracy stuff, and those DNC jerks seem like they are pulling all stops to put Biden in to lose to Trump ON PURPOSE.

Bernie's biggest hope is that people ignore mainstream media and that there are enough young people who realize Bernie is being ousted from the mainstream media. The CNN debates were biased against Bernie, he was left out [by mistake--yeah right] from one NPR report. If Trump can use Twitter hopefully since most younger people, Gen X on down will ignore the dinosaur news shows that give us nothing but more of the same.

I hope this time, cooked up "superdelegates" and other bullshit aren't used to push Bernie out like they were in 2016.

Remember when I wrote this article?

The Democratic Party Deserves to Die

I have my regrets as I was still drinking the Christian fundamentalist Kool-Aid at the time, about to bust out as my cognitive dissonance was growing so great, but you will notice at least the Republican party never grabbed my votes. How could they? I was too poor. I had the intelligence to know Trump was a liar.

I still feel the Democratic party betrayed us all in 2016 and sadly it seems like they got the mainstream media and rest geared up to do it again. They are shoving Banker Joe down our throat, whose so sold out, he even told people he'd pick a Republican running mate. If you are being crushed by student loans, thank Joe Biden, as he helped to advance the laws that made them non-dischargeable in bankruptcy. Some people have gotten upset with me, saying you got to get the Orange Sociopath out of office even if you have to vote for Joe! My dismay grows here, thinking again we will be given two non-choices. Get out the barf bags yet again to choose a guy that is just another neo-liberal out for the megacorporations, who may as well be a Republican. I have already decided I won't call myself a Democrat anymore if they succeed in shoving Biden down our throats.

In the ACON world, we are all concerned about abusers and admit their ENABLERS, the people who stand by and support your abusers cause us as much pain, in their defenses and handing power over to abusers. The Democratic party outside the AOC and Bernie branch, seems like a henpecked enabler parent saying to the hellbent sociopathic one, "Whatever you want dear" while kicking all vulnerable members of society to the curb.

Ever notice most establishment Democratic politicians are always weak and in the subservient position?  They are always making compromises or backing down to extremist Republicans. This is because too many of them are on the same corporate and billionaire pay-rolls. Outside Bernie, it's going to be all business as usual. Even Warren and Pete B. are making constant concessions to their economic masters!
I still plan to vote for Bernie though now it seems like just a way make a rhetorical stand. I also go vote, no one I vote for wins but I vote on principle, because I believe some semblance of democracy is important.  One conspiracy is that the voting computers just put in whoever the elite want. I do not think there are enough stupid people to vote for Boris Johnson in England, so maybe Diebold got a hold of their voting machines too. Sorry if I sound cynical here.

Trump sometimes seems to be a reality actor the elites put into place. Perhaps the truth is just that he is a slow rich jerk who rode Daddy's coat-tails to fame and money and is just bluffing his way through for a job he never was qualified for. Most of his antics seem like bullshit to me, like going after Greta, the man is almost a caricature of the worse president ever which he is.

I don't support giving up, we should still vote and protest, but something has gone very wrong when most people are very broke or struggling and right wing assholes still keep getting into office without nary a problem. There's only so many Christian extremists and rich boomers to vote for these people.

Sometimes I feel a spark of hope, that Bernie could get in, he at least seems to care a bit, and wants life to be better for the average person.
Posted by Five Hundred Pound Peep at 3:08 PM