Taking Punishments for Being Fat 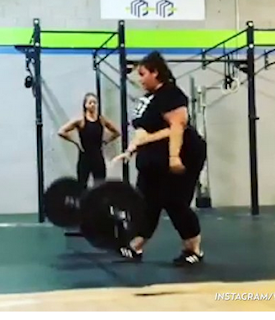 [picture source]
I wrote this on one message board:


There is the societal belief that fat people must be punished and Whitney is taking her punishments. That bugs me about this show, the fact she does not take into account any limitations.

I had this thought watching the TV show Big Fat Fabulous Life with Whitney Thore. Ever notice that one premise of this show is how she is trying to prove herself so hard, all the time using "fitness" and "exercise" to do it? The weight in her case, just doesn't seem to budge except in a very small amounts and despite her interest in physical activities.

The other day, they showed Whitney participating in a work out contest. They had her lifting weights on a barbell. She looked like she was going to injure herself as she lifted these heavy bars. She also showed a video on Instagram where there was some debate with internet trolls. On her TV show,  Whitney tried to go out on a surfing board on a river, and almost drowned herself as she was unable to stand up on the board and Ryan [her new business partner] had to tow her back so she would not drown and tire of swimming. I felt like she was risking her life, as people have drowned from far less.

Why do they always showing her essentially "beating herself up" for the cause of exercise. It's like a mea culpa exercise, aka if one is fat, you should suffer and suffer hard no matter what to "be thinner". She takes risks that I think are extreme. This brings out something in our society about weight that is not good. She doesn't seem to realize one major back injury or other could really set her back. I am not against exercise for fat people. I lift some weights at the purple gym, not on bar bells but on weight machines.

Punishment of the fat is nothing new. What is scary is our bodies punish us enough, but the societal message is that a fat person should punish themselves and even "hurt" themselves or risk injury like Whitney is doing, and that really bothers me on some deep levels.
Posted by Five Hundred Pound Peep at 6:33 AM