Was the Nuclear Family a Mistake? 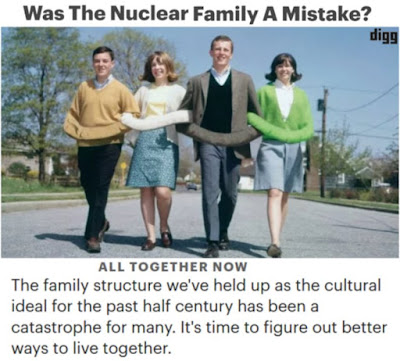 The Nuclear Family Was a Mistake.


"If you want to summarize the changes in family structure over the past century, the truest thing to say is this: We’ve made life freer for individuals and more unstable for families. We’ve made life better for adults but worse for children. We’ve moved from big, interconnected, and extended families, which helped protect the most vulnerable people in society from the shocks of life, to smaller, detached nuclear families (a married couple and their children), which give the most privileged people in society room to maximize their talents and expand their options. The shift from bigger and interconnected extended families to smaller and detached nuclear families ultimately led to a familial system that liberates the rich and ravages the working-class and the poor."

I do not have a family as everyone here knows. There's no ties to any family members left. I cut all the Facebook ties too, my account had been restricted from all, but now they are unfriended and blocked.   My cousins chose my mother too and talked to me with disrespect that went deep. There's no one left in my life I am related to.

A world of isolated nuclear families grew the isolation and also grew the power that narcissists held over our society.

As I grew deeper into my no contact, I questioned the mythos of family and the structure of our society, so seeing this article was very interesting to me. The nuclear family is failing, just look at all the abuse and pain it's brought so many. I am glad to have my husband but I have no family now, all they brought me was suffering. Going no contact was the best decision I ever made. My life grew vastly better without them. It was nothing but a collective of people who only cared about competing with each other and appearances. Compliance and authoritarianism like too much religion was the highest values they aspired too. People are starting to question the societal structure of nuclear families and how imprisoning they are. That's a positive.

It's horrible too how religions focused so much on family especially in conservative churches.  Even as a married woman, I felt ostracized simply because I was childless in Christian churches. One IFB advertised itself as "family-friendly" I noticed not one divorced or single person over the age of 20 attended there. The Catholic church was totally family focused. If you don't have children or have the white picket fence "family" life there's many places in American society you simply don't fit in. Even now, many parts of society are slow to get the memo that many people are living single, never had children, or are childfree, and aren't part of the normal mainstream definition of family. Single, childless, trans, and gay people are left out.

Traditional family life is impossible even economically now for many. Visit Reddit sometime and read how most millennials have decided not to have kids. This is due not only to the lack of money for many but the fact that family life was no bastion of joy. That was part of my decision making, the inherent fact, that my own parents were so miserable, angry and upset with their children, why would I replicate the same path for my life? The childfree movement is not only based in economic lacks, but based in negative experiences as well.

If you can't take care of yourself, how do you bring little children into the mix?  Add in distance, the forced economic nomadism in America and other changes. Read the book Bowling Alone by Putnam. Now add to this, not everyone dreams of life in a nuclear suburban family, there's been many cracks in that facade for some time. There's a lot of oppression buried in that 1950s dream where the Leave it to Beaver lifestyle was promoted as the "ideal", that really wasn't the reality back then,but many look back on the past with rose colored glasses. Mr. Cleaver was very wealthy even for that time.

Some people claimed the author of this article is a neo-liberal who wants everyone living alone in their $1,000 a month pod, but the nuclear family has failed for many people. Family is a word that brings to us not memories of fondness and loving moments, but memories of abuse, "never being enough", and rejection.  All the distance alone where too many in America are forced to move for economic survival, family became strangers to many from distance alone. I had this revelation that one theme of my life, was that everyone lived far away and I was forced to leave them or never see them due to limits on money and the pressure of distance. Even as a child, while other cousins enjoyed close relationships with aunts, uncles and other cousins, I was the kid who lived far away. I was always left out. Isolated nuclear families, gave the narcissists far more power to abuse their kids, because there were no outside relatives to observe or stop anything. Every home was a little fiefdom where one crazy Mom and or Dad or two of them could rule without censure. This definitely allowed the malignant narcissists more leeway.

I noticed without fail in fundamentalism and evangelicalism, that most adherents had life follow the "family script", they all had large families, were home owners, and had children. James Dobson and the rest in evangelical circles, all preached on the centrality of the family.  In my second IFB, they called themselves "family-focused" as the preacher there paraded his endless stream of locally living adult children and grandchildren.  Those without a family were basically ignored. I was outside of this just by the economic and other facts of my life. That world alone became painful in shoving "family" down my throat.

The nuclear family is tied to the hyper-individualistic society. In conservative regions of this country, things became so family focused, that not to have a family left you out of the warp and weave of culture. I have to admit when organizations put on "Family Day", there seems to be some prejudice towards those without one.

"In 2004, the journalist and urbanist Jane Jacobs published her final book, an assessment of North American society called Dark Age Ahead. At the core of her argument was the idea that families are “rigged to fail.” The structures that once supported the family no longer exist, she wrote. Jacobs was too pessimistic about many things, but for millions of people, the shift from big and/or extended families to detached nuclear families has indeed been a disaster.

As the social structures that support the family have decayed, the debate about it has taken on a mythical quality. Social conservatives insist that we can bring the nuclear family back. But the conditions that made for stable nuclear families in the 1950s are never returning. Conservatives have nothing to say to the kid whose dad has split, whose mom has had three other kids with different dads; “go live in a nuclear family” is really not relevant advice. If only a minority of households are traditional nuclear families, that means the majority are something else: single parents, never-married parents, blended families, grandparent-headed families, serial partnerships, and so on. Conservative ideas have not caught up with this reality."

Economics are changing, where the nuclear family of yesterday is really only affordable to the very few who can afford the house, the children and all the trappings. The nuclear family is falling apart in America as young people fall down the ladder. Child birth rates are in the basement because young people aren't making the right money to support a family.  We lost community and more when every household was to be an isolated subset and unto itself. It is bothersome to me how as I got older people stopped hanging out with friends and became more and more "nuclear" family centered. This without fail was leaving people out.

Posted by Five Hundred Pound Peep at 8:53 AM