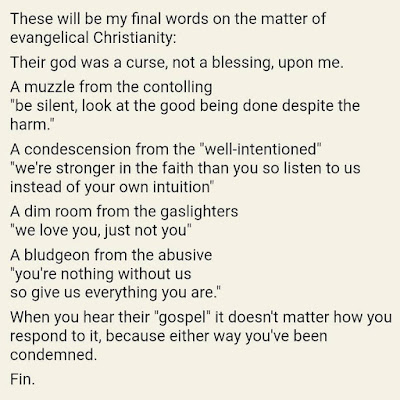 "A eulogy of sorts. Others have work they must do to combat this blight, and I support it. But it is not my work to do. I've been leaving behind in layers since 2006 and now I am finally free in the moonlight. All future poetry will cover other topics, though I have plans to compile my past poems.
#poetry #exvangelical"

This won't be my last word. I have been involved to combat the blight. I am involved in the exvangelical and deconversion community online, trying to help others who have left too. There's been a flood of people coming out, we have too much information available now for people to be stuck in religions that lie about reality and have expectations that do not match the real world. It's like the online ACON community, how many of us were freed when we found out about no contact and how it works? The same goes for religion. With the internet, there's people to turn to. I have served as one of them in a small capacity. Part of this includes reaching out to others who have experienced spiritual abuse.

I deconverted three years ago which was one of the best decisions I ever made for my life. I am going to be writing a sermon about God or different versions of divinity and how the picture of God in evangelical Christianity is both a dark and limited one for my UU church. I plan to explore the better visions of God or higher powers, where humans have dared to think thoughts about "better Gods or Goddesses".  I will share it here, when I am done with it. As I have written here before while I am atheist friendly, I do ponder the possibilities of a higher power or what form it could take.

The Christian god was a curse to me as well. It's threats of hell and narcissism were unending. It's coldness and indifference and lies about reality harmed me on many levels. Christianity turned me into a doormat, and told me to be silent, about abuse, about myself, about my thoughts it deemed sinful.

While there are people who seek after light and goodness in every religion or non-religion, sometimes I have thoughts about how an atheist who cares about social justice, is closer to the light then a Christian committed to Trump standing by endorsing the harm being done to so many.

If you think about it the gospel, is about being condemned for just existing. I can't love a God that made billions knowing the vast majority would end up in eternal torture. That God was formed out of human darkness.
Posted by Five Hundred Pound Peep at 11:00 AM