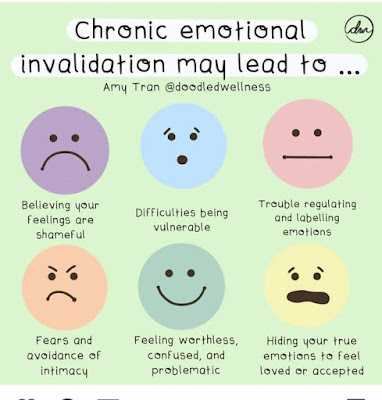 Life kind of sucks when you have to hide your true views or emotions to feel safe. I was thinking about invalidation. In my family, it was severe. No one had any respect for my feelings or personhood. In many ways I was completely invisible. There's definitely endless blog posts about their endless rejection on here.

One thing I have noticed is the constant invalidation from the Covid cult. I'm more quiet now, but there was a period, I was trying to talk to a few people, only to get shut down. There's so few to talk to about this. The Covid cult since it is run by sociopaths follows the same trajectory of how my family treated me. Everyone that questions the leaders or the norms are called "crazy" or "mentally ill". Everyone that disagrees is vilified and lined up for "punishment" of a financial nature for refusing to obey.  No questions or examination are allowed.

People have spoken to me in ways that reminded me of how my family treated me.  This included being looked down on, being patronized, told to shut up and being threatened. There was one guy who when I told him my views on the vaxx, who told me they should throw you down and force it on you. There was only a handful of people I said anything to, but it was all disappointing. There was invalidation there. Don't take my word for things, but one thing common to too many people is they don't research or look into anything. I have been shamed and seen as a bad person for my views about Covid.  My convictions are strong and unbroken but I think about the focus on shame, and how they want to silence and now literally HURT those who are not conforming.
We live in a society where everything is about status and hierarchy.  I either run the danger of being out right hated or I get the "project friend" pity ploys just from the severe obesity alone. Add in the autism, there's times I used to sit back and observe a group of people and used to think how they fit in so easily. They didn't have to fight to not be an outcast. They could be vulnerable and be "accepted".  I wasn't sure of the formula. I am not abused as much as I was pre-ACON recovery but in my case I became a more quiet and reserved person. That would include the fear of being vulnerable. I used to be a far more open person but not anymore. There is a price for it though, you do feel more disconnected. Measuring words like teaspoons to make sure no narcissists will screw you over for the information they have gathered, kind of blows. It keeps abuse away but it also keeps authenticity away too.

This also ties to the fact that to deal with my autism, I had to learn to "cloak" long ago, and that involved the suppression of emotions. While neurotypicals can cry in public and have nurturance and no judgment, that's not going to happen for someone on the spectrum. You have to play that out different even for mere survival. The Aspie that lets the "melt-down" be seen by a certain age is going to face a heap of trouble.  I appear muted to people, maybe even "boring" because of this. Some facets of my autism include a very monotone voice and a face that shows little emotional expression. I have noticed whenever I show an emotion or any passion about something it seems to "surprise" people, so put a notch on the "regulation of emotions" issue. It's complicated massively by autism.

One new friend has told me a few times, "you need new friends" because I tell her how I feel silenced around people in groups I am in.  I find this interesting she says this, and I am listening. Living in an affluent area made all this far harder. I dream of places where I could find "acceptance" and had brief glimpses of it in rare times in life, but I wonder about this. I still struggle with being around people I feel invalidated by.  I try to be a good listener, and hear them out but I've noticed because I don't conform or say the "right things", the [now Zoom] rooms go silent more often then not. They seem unsettled by me even by the most mild of statements. There is always this feeling of "You are too weird" emanating off them. There's always this feeling that I am "problematic".

There was this one lady I used to know at a Christian writer's group in my old small town, who told me a lot that I was a "challenging thinker". I used to take this as a compliment but there was a feeling of unease too, when she would say these things to me either in person or writing, as she repeated this more than once. I think now she was telling me, I "bothered" and "unsettled" her with out being that impolite or direct. She would say this often every time I opened up things a teeny tiny crack. And don't think I did this talking about conspiracy or weird esoteric things, it could happen even with the most minute conversations. It was a way to tell me, "you are thinking too outside the box".

Religion has gotten weird for me, I have so much cognitive dissonance now about it all.

The fundamentalists betrayed me, and obviously I have outlined how that happened in my endless deconversion articles, on this blog but now I feel betrayed by the liberal world. I faced spiritual abuse that was severe in the Christian world, and then I go rejoin the "rational", supposedly "scientific" world of liberalism, and it's betraying me. I feel like a sucker out there protesting Trump, and I still don't like Trump but that just feels like 1984 George Orwell brainwashing like when the crowd screamed Goldstein, as their government was complete evil. Some of the same problems I had in liberalism in my 20s are cropping up this many years later.

I'm still in the UU, but wondering if my new politically non-correct viewpoints will drum me out? I had a conversation with husband where I told him, I wish religion had worked out for me at times, maybe I would have still been a Christian if we never had left our old small town. Religion does take some community support to really have it work. There's expected conformity there too where like minded people are supposed to be gathered together.

Obviously I didn't fit in well with the fundamentalists, I never should have been there. The pastors always got angry at my questions. At least in the UU, there's some mode of freedom of thought even if sometimes some of the political correctness gets oppressive.  How many UUs would be cool with someone wondering if some bible prophecies are true about mammon or the "beast" owning humanity from the inside? I could even refer to some warnings of the Victorian writer Ruskin, and I'd lose them. With religion, to be frank, I am tired of the expectation I must "get it all right" I don't want to be back in that fundamentalist cage and those religious pressures. I figure if there is a God, hopefully it is one of some compassion who can deal with me. It may even honor my rejection of the materialistic world system that wants to destroy our souls. Among the UUs, "different" has more chance of survival, but I can't deny watching them all line up for the Covid narrative hasn't been very painful. It has felt invalidating. People make their own choices but why do I have to be the lone wolf non-conformer. At most I suspect there could only be 2 others who haven't joined the parade and there very easily could be zero.

I thought maybe I should be one of those people who let's it all hang out. Online, you all get far more of my thoughts then are shared in real life. In my case, this didn't work. I often think to myself lately what kind of person would I be now, if I had the emotional foundation of a loving family that listened and "saw" me? It's brought interesting questions up to me. I have thought too, that the trap of seeking validation through others, is also a path to nowhere. Therapists need to be clear on this especially with abuse victims.

It has occurred to me this is another layer of the onion where to be denied this core support at an early age led to a lifetime of emotional troubles and some problems in relationships with other people. While I have some close online and other friends and a loving husband, I don't have the social networks of most people. I'm in this weird place, how much of myself can I show? Why does it feel so unsafe? These thoughts remind me of this old popular book, I read in college, "Why Am I Afraid to Tell You Who I Am?"

I've become more superficial, and removed in conversation with the majority of people I do deal with. This is where the fear of intimacy comes in. I figure the less they know the better off I am. I lost friends you know from what I wrote on this blog, about Covid and other things. One friend hasn't talked to me in months. To survive mentally now, I try to tell myself to be true to myself, and I got tired of trying to "get people to like me" and quit that game. It's better to be alone then in people pleasing hell.
There's a few online friends and two newer ones I can talk to about stuff, but it's scary how tied this early invalidation was to what I am dealing with now. This is a life where I have felt unheard and invisible in general. Some of us are punished for not conforming. That seems to be a theme of this life. How dare you don't conform! However hiding myself seems like a path to nowhere good. The fear that has been installed is not good.
Even with this Covid crap, if I was a good little Covid disciple, maybe I wouldn't have lost the friends I did, but I had no interest in supporting these evils. One person told me elsewhere online, I'm one of those people others hate because I see through the matrix. I don't know about that, if you go down "prophet" highway that can put you in a place of insanity and disconnect from others. The family obviously hated me for being a truth teller. I am sure they have all lined up regarding Covid. It's good I am no contact, I am sure the pressure to take the jab would have never ended.

I found this meme interesting and definitely sums up my life and what I deal with. This is some of the worse to be faced from narcissistic families, the invalidation, where they make you invisible, and deny you personhood and presence. We have to stand up for ourselves and face these fears. I have thoughts like "I am me for life" and "I better be on my own team."

Posted by Five Hundred Pound Peep at 5:40 AM