The Social Stigma of Being Supersized in One's Family 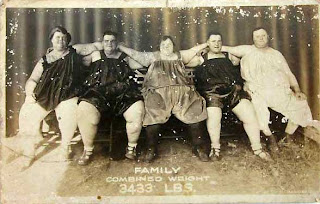 One thing that can happen to fat people especially in the greater sizes is you can be rejected by relatives. You realize while a few closer inner circle relatives from your immediate family remain in your life, the rest barely want anything to do with you. Even if you went to visit their homes out of state years on end even while being ill, you realize this favor is not returned. They just do not come visit you, and in my case, I ended up moving even farther away. I have reached out to aunts, cousins and others only to have endless closed doors. Even other ones who would be allies on the poverty front, want nothing to do with me, my low status within the family based on weight from the ones who are more upper class, normal and thin. In other words the uncle with his two perfectly thin and popular daughters who refuse to even befriend me on a social website, who just went on a cruise to the Bahamas, isn't wasting much time bothering with the likes of me. Usually he just writes that anyone in need of any 'help' aka disability, unemployment, is a "deadbeat" from his hours of being brainwashed by Fox news.

I find myself sometimes shuddering in fear for what awaits for the cousin who has passed the 400lb mark and my two nephews who are in higher weights. How will they be treated once they cross a certain threshold?

I am not the only supersized person I have heard of this happening to. For many families when a person crosses the "acceptable and employed" line of fat into severe obesity and disability, you will see the subtle rejection, you are "not like them", and while some of the more dutiful relatives may keep you around, it is not the same relationships they have with each other. You know when they keep their party secret to keep you away from it, something has gone wrong. The fat person faces earlier on, You are not what they wanted you to be.

Matters of whose fault it is doesn't matter, the relatives can eat far more then you and pay little price but you are still to blame. Their refrigerators full to the bursting with lavish food, they always eat a full plate with seconds at the shared meals, but they aren't fat! They can know about your endocrine struggles and medical history but it does not matter. Some just judge on what they "see" and nothing else.

Even friends of the family join in the fat beat-down-a-thon, one family friend of 30 years duration, told me, that a female relative had been unable to accept my weight and never would be able to. I had already discerned that, but this was told with the woeful eyes, that didn't even try to hide their lack of sympathy and disgust at me for being overweight.

I recently had one relative even defend my ostracization and you can even reach out to the community and will find even others who say to you... "So some of your family rejects you over your health problems?" as if that is acceptable. They meant well, but when you know how people see you, it can impact a person. What other health problems but fat related stuff is even accepted to reject someone over?

I have heard that message too, it is acceptable because you are so far gone. When you have seen years of the looks of disgust on some faces, for being what you are, it does something to a person that goes beyond words.

I have known other supersized people this has happened to. I am NOT the only one. One friend now deceased, had two upper class parents, leave her living in her car to homelessness in her 20s when she reached 600lbs, because "she had made her own bed of fat", and ended up hospitalized from the rigors of living in her car. I never was treated that badly but what did that do to her self esteem alone?

Another friend even with very well off parents here too, worked herself into the ground, even working while severely ill to keep up with the Joneses and maintain a lower middle class lifestyle then disability would bring. There was too much shame in any illness related to fat. I believed this probably ended her life far sooner then it would have been. Here too the family blamed her, even though she was diagnosed with endocrine disease and had lymphedema that brought on pounds of water weight.

Others while the family may help them, get condemned as "burdens". Obesity unlike other illnesses does not earn any sympathy because unlike cancer, cerebral palsy or the wide array of things that 'can go wrong", you are seen at fault. Unlike the drug addicts, and alcoholics, your illness shows and is visible to others, and in some ways the blame can be worse. The drug addicts and alcoholics are told it is an "illness" and offered endless places to get help, rehab, and more while the fat person is told it is a failure of moral character and why don't you work to lose weight and ever wonder why there are so few rehab centers for fat people?

What gets me is I was looking at some family albums, from the 1980s, in these albums I ranged from 13-16 years old. I was big nearly 6 feet tall, and perhaps around 30-40lbs overweight but more LARGE then FAT, what astounds me at the time is I remember being told how utterly fat I was at that age, even by the extended family, almost like I was huger then even now which is ludicrous. I was actually quite near normal. I remember even visiting one grandmother at the time, who allowed me only one meal a day at her house where I got so hungry, I snuck food out of the fridge.

I was able to escape their condemnation, I often think what would have become of me if I had allowed these relatives to fully define who I was? I turned to God for definition. But that said, I think of other supersized fat people facing the daily grinding down of their self esteems and who they are. You never forget the pain.

What is even sadder for me, the distance, and time of 20 years, and living so far from people and health problems making visiting far harder and impossible in some cases, has chipped even the more positive relationships away I wanted so hard to keep. If no one visits you because you live in a medium sized apt, and "there is nothing for their children to do", as the years go by, and you have no money for bus tickets, or gas or long distance travel, you find yourself becoming strangers. Their time is given to who are more mobile, more active, and easier to see.

I often ask myself how did I end up long distance from everyone? This is part of modern society I hate. There is no "home" to move to, trust me I'd already be there even to try and renew relationships and be around my nieces and nephews and part of their DAILY lives, everyone is so scattered.

Being rejected for being fat by relatives, can be one of life's most painful things. What scares me is I can see how the other ones who are fat face different degrees of rejection by the thinner ones. Sometimes you can even see the immediate changes in treatment when fat people lose some weight for a short time. It is actually astonishing to watch. I do not think this is the way things were meant to be. But look at how the airwaves alone are influencing everyone to view the fat. It can be very hard for a fat person to deal with relatives who do not accept them for the person they are inside.
Posted by Five Hundred Pound Peep at 8:05 AM