I am of the opinion you will never see a celebrity that is known or famous question the system, because they are part of the system and that system profits off fat people and the diet industry that hypes extreme personal responsibility as the sole cause of the obesity epidemic instead of our adulterated food and toxic lifestyles imposed from above. So when you see one of these self-avowed celebrity "experts" coming out with their brain-dead politics from either side of the partisan aisle, always question the slop that comes out of their mouths.

Here is the transcript of the video: 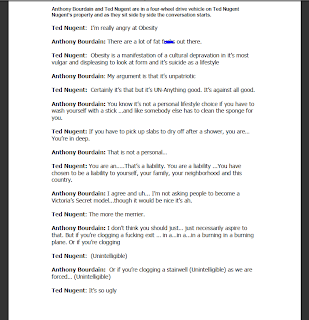 Go to the link it gets even worse. Make sure to be careful of your blood pressure. They complain about fat people on airplanes, say fat kids SHOULD be made fun of and say that obesity is a suicide lifestyle freely chosen. That last one alone is beyond offensive and shows their utter loathsome stupidity and their being used as mouthpieces for other interests.  Even Bourdain's nauseating brainwashed politics are enough to make me vomit all over my keyboard along with the hatred of the fat.


He is also a former user of cocaine, heroin, and LSD. In Kitchen Confidential he writes of his experience in a trendy SoHo restaurant in 1981: "We were high all the time, sneaking off to the walk-in refrigerator at every opportunity to 'conceptualize.' Hardly a decision was made without drugs. Cannabis, methaqualone, cocaine, LSD, psilocybin mushrooms soaked in honey and used to sweeten tea, secobarbital, tuinal, amphetamine, codeine and, increasingly, heroin, which we'd send a Spanish-speaking busboy over to Alphabet City to get."[24] In the same book, Bourdain frankly describes his former addiction, including how he once resorted to selling his record collection on the street in order to raise enough money to purchase drugs.


Ted Nugent who has no room to speak with his involvement in wicked TV shows, and has had multiple children out of wedlock .

We live in a culture where it's no holds barred on fat people. What makes me sick will be those who will listen to these people and learn to hate fat people even more.
Posted by Five Hundred Pound Peep at 9:19 AM