I Reject The Hamster Wheel 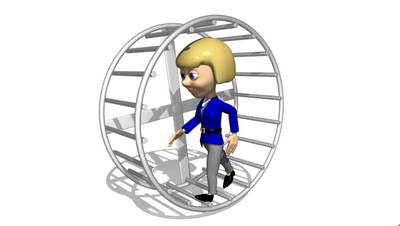 One thing I tell people is they have too many standards imposed on people, how many have low self esteem today because they are not a rich successful star of some sort? How many suffer on the hamster wheels of being told they must have the perfect job, perfect body, perfect career, and perfect life? Even Facebook can be an "achievement" contest,where people post pictures that highlight the more positive aspects of their lives as if they are trying to sell their "brand". The people I trust more are the ones who can relay hardship rather then endless bragging about vacations.

I was raised in a critical, hyper-perfectionistic atmosphere where love was in short supply and long lists of your endless shortcomings were announced. When I later became fat, some of the thin family members saw it as a personal affront like I had chosen this way of life. This is why I haven't seen a relative step over the threshold in years of my apartment. This year instead of dragging my housebound and sick self to any holiday meals, I'll issue an open invitation for them to come here and let the chips fall where they may.  Perhaps if I get more brave I will share more unusual family dynamics on this blog, but let's just say, my black sheep status remains fully intact. I plan to rewrite the Sister Fat, Sister Thin entry which was taken down.

I have to admit even when I read self-help literature and all the focus on goals, I feel my eyes closing and wanting to nod off. The thin and fat thing definitely for women is a core component of this, where if you are fat you are deemed a failure and if you are thin, you are deemed a total winner. My life was strange, even recently going through old papers, I found an old third grade report card where I had gotten 4 As and 3Bs, and my father wrote on the back, "Five Hundred Pound Peep can do much better then this!" Yes I remember that day, where I was told, that my grades were too low and only straight As were good enough.

I was not prepared for how life really would become, early poverty, illness, resiliency wasn't on the menu in a life for where I was told I had to be perfect. Where I was not prepared for life, where I was told that what one "achieved" was far more important then just being a human being. When I was young, I did manage to get a college degree and nearly another and even a few semi-professional jobs, but as my health slide down the crevasse realized that the cries of "loser" were gathering around me. As I said love was in short supply and compassion and mercy were as well. One female relative would tell me even in recent years when I took ill at her house, that "You have nothing to show for your life!". I suppose she considered my thrift shop furnished apartment as a poor reflection on her or something.

I understand people wanting to set goals and thinking that going forward in life is a good thing, I think these are positives as well rather then just sleeping on the couch for the rest of your life. Some of my goals is to get a graphic novel done, complete a physical therapy program and stay alive. But sometimes I get worried about all the standards that human beings are expected to meet and the messages they get if they do not do meet them. I told a group I belong to which is a self help group, "I am tired of goals and all these standards, all they do is make us unhappy, a lot of it is about making us ever consuming consumers via our overlords!" By "overlords" I mean those who set the standards, corporate pundits and all. Those who profit off telling you what to care about and working you into the ground.  You know the people who write the women's magazines, and tell you that you must have everything from a perfectly flat stomach...WHY? to totally smooth feet to a house where every counter top is gleaming 24/7. Here is another point, has anyone on their deathbed ever said, "I wish I spent more time at the office?"

I tell people jump off the hamster wheel! Even Europeans and those from other countries are saying Americans have forgotten how to be happy and I think its true. We are in a growing narcissistic society where personal achievement is everything and happiness and love are in short supply, along with this is one reason disabled people are facing some hardships.I avoid all the political nonsense on TV where they want to tell someone like me, I am the reason the budget is collapsing, while they paper over multi-billion dollar bail-outs and call for even more wars that will cost trillions of dollars. Being superfat in a society, remember I do not wear a sign that says "GLANDULAR CASE" HERE, where people see you as a sign of everything evil in society posting a picture of a 600lb hapless man on a scooter, is not easy either. Yes, I have had "Loser" ring through my head long enough. What entitled me to survive? To see God's standards and to realize our society has gone nuts, and psycho dissolved in a spasm of self-pride, where love of others is suppressed behind impossible standards. Well who determined these standards? Very few question where they come from. Even in some psychology magazines they tell people set goals and it will seemingly make your life perfect. Sometimes I think people would be happier if they were told they could go have a little bit of fun and rest instead.Note to the babyboomer generation, [sorry in advance to the good babyboomers I know] people age die and get sick, bad things happen, not everything on this earth is fixable. Life is short, I do not want to chase a carrot on a stick for the rest of my life.

One trap fat people fall into is, the life deferred for when they will be thin. Supposedly they tell me I will become a thin person if I set enough goals or even get the diet just right. Trust me thin people are in shock at what I cannot eat.  I know people mean well and have the best intentions, but this week I am just trying to keep from throwing up and having bowel pain, pears and bland food are winning.  I woke up long ago and thought, I will never be what THEY want me to be. I have not met any of the standards. I am not thin. So what now?

I jumped off the hamster wheel.

and I measure my "achievements" by other standards.

Posted by Five Hundred Pound Peep at 7:18 AM