I'm praying for everyone who got hit by Sandy...and really worried about what is going to happen in New York City especially now that the infrastructure seems to have taken a giant hit... 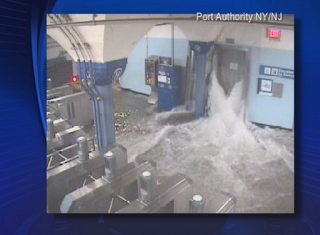 Disasters like this are very scary. One week without electricity and because I sleep on a CPAP, I would be in trouble. One thing that hit me, is what will happen to the old and sick who cannot walk well since all the buses and subways are not running? I lived carless in an urban environment for 5 years so know how dependent one is in the city on these things. How will they get to work? And if they can't? How will they pay their rent?

This storm also happened during the last week of the month where most poor or lower income people have already hit bottom, we do in our household. When I read preparation lists, I think, Whose got the extra hundreds of dollars sitting around to bolster up the supplies when the day to day supplies are barely maintained?

If I could afford it, I would be a prepper but that seems a hobby for the middle class and above set,so many can barely can keep normal food in the house month to month. That said, is it just me or has the American infrastructure grown too fragile and delicate? Why do we still have 1930's technology when it comes to the electrical system, where the slightest puffs of wind bring the whole thing down? Do you all know many European nations got smart and started putting the electrical wires underground?

What is going to happen in NYC, as people grow weary, run out of the first storages of food, and figure out the subway that takes 5 million people to work daily, is damaged beyond belief by saltwater? What is going to happen with the big city criminal element or the drug addicts who can't get their fix, since their wealthy drug dealers probably hightailed it out of town.Are we looking at another Katrina situation? I sure hope not. I dread what could be happening there.

I seriously am worried for those facing flood and other problems. Even states very far away from Sandy got hit with high wind even up to 800 miles away. I know people in Ohio and Indiana who had their lights go dark. Some people never have seen anything like this.

Years ago I got caught in a blizzard in 1993, I had not had my weight gain, but was already a severe asthmatic, and probably weighed around 240lbs at that time and I traveled to North Carolina to look into teaching jobs in mid-March. Well, not listening to my intuition, cost me badly as I went there from over a 1000 miles away in someone else's car and paid heavily for not just cutting ties with this person and finding a bus or train home. This was the "1993 Storm of the Century"

If I hadn't thrown a fit and got my now EX-friend to turn off an exit into Mount Airy NC, we probably would have died. A kindly sheriff would rescue us out of 4 feet of snow drifts and take us to the fire station and then later sadly an unheated hotel with no power, which was better then nothing but trying to survive during that entire week, freezing and with very little food or water--I fortunately had brought a couple boxes of crackers and a couple of gallons of water- was very scary. I lived in extreme fear, that the cold and stress would trigger a huge asthma attack.

One big storm, and civilization itself was stripped away, at least we had gotten to a small town, where we were paid some mind. It would take a week and half, before the roads were cleared and we could leave. I would never return. And with the hurricane, I think of the disabled people, the ill, those who can't walk either from weight or other reasons, those who may be alone and have no family, and it's a scary mix. Ever feel like civilization itself is on the cusp at times? I sure do. And more and more we live in a society that seems jerry-built, and fragile beyond belief. This is a scarier world to be disabled in. Did any of my readers go through Sandy?
Posted by Five Hundred Pound Peep at 8:37 AM