Liberal and Conservative? NEITHER! 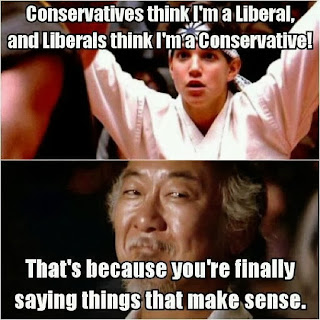 Today on a social website, I had this friend of a friend who is a Neo-Marxist academic type, get very angry at me. I had put up another meme, that talked about the media controlling information and how there seems to be all these political boundaries imposed from on high. Well she didn't like that. So she started mocking me and I unfriended her. Hey I am not bothered by people disagreeing with me. Show me some new evidence and I will try and incorporate it. One of my friends doesn't know it but during one discussion, I told him I think global warming is a sham but he brought up a good point where I said yeah we should compare volcano output vs. human output because the scientists admit that volcanoes can issue in immediate climate change.  If you are one of those people who escapes the "matrix" or the lockbox of right and left, Demopulican, Republicrat, a lot of people aren't happy with you!

I mean what political party is there for a person who supports social security [some safety nets] and unions, but hates globalism, the police state, and endless wars? Toss in my religious beliefs as a born again Christian and well I don't fit anywhere. I'm against capital punishment but against gun control. LOL that one alone confuses people.  Even the libertarians are on the pro-globalist bandwagon with Gary Johnson as a supporter of NAFTA. A disabled libertarian is an oxymoron even if they are right on a few things.  Even the Constitution party has those extreme we want to implement the Handmaiden's Tail types [patriarchialists] who by the way go against the Bible in their desire for control. Green party? Well it's a bit on the liberal side. I am not going to fit in with my religious beliefs or my rejection of post modernism.

Hey being disabled, it's not like I can move to Idaho and join up with some preppers even if they are correct about our disappearing civil liberties. Neither of the two big parties care about NDAA. Being poor too, I'm not going to go sign up with the Tea Party while helping the bankers in getting people to sign up for their own demise on behalf of the elite.  When they scream about their disappearing taxes, those types want people like me [especially those big mooching fatties] to be thrown off the government "dole" and into the gutter. So what's a person to do? I wonder how many other Americans have realized that liberal and conservative barely mean anything anymore. I remember when liberals supported civil liberties and so did conservatives. The Occupy movement was right about a lot but ignored the fact government and big business work together.

It can be tough when you walk outside the "box" and look at it from the outside, and see what a mess it is. People don't like what you have to say especially if you're in a place where you manage to upset both sides.

Update 2019: I consider myself a liberal today, more on the very progressive side. Deconverting changed that but I had kept liberal values the whole way through which made for a lot of cognitive dissonance. In the USA, we have the sold out centrist party, with the extreme right party and both moved so far to the right, I am not even sure we have any true liberals out there outside of politics like Bernie and AOC, who I support.

Email ThisBlogThis!Share to TwitterShare to FacebookShare to Pinterest
Labels: Politics