Is Gilead Coming? Theocracy in America 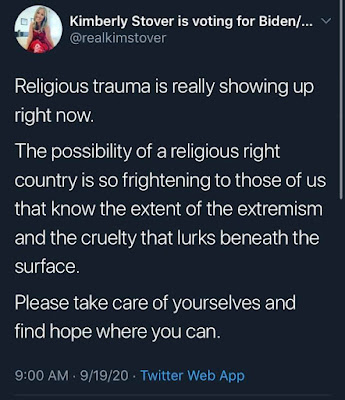 When I was a fundamentalist Christian, I had a blog for that world too, and wrote a bible prophecy/conspiracy blog. It is shut down and is not open to public view. I have a lot of embarrassment about my previous religious beliefs. However I was not your usual fundamentalist Christian. I still hated the Republican party, openly protested war, and believed in help for poor people.

I never fit in and was in the wrong place. Later, I would realize the insanity of the small town I and my husband used to live in, and how that place influenced me.  They have become a bastion of extremism with their present-day anti-masker rallies.  My eyes would be opened to the backwards attitudes and extreme religiosity and right wing dominance even of the mid-sized town my parents moved me into for high school after leaving an urban suburb of a giant metropolis. Even now, at least 95 percent of my old classmates outside a few gay kids who escaped, are all Republicans and evangelicals or fundamentalists.

On my religion blog, being Aspie, I got interested in a certain topic, which was encroaching Dominionism and theocracy. I was an strange one-off Christian and AGAINST it. My old blog had endless posts about Seven Mountains theology, Vision Forum, The Council for National Policy, and many other groups that believed Christians were supposed to seize political power in America. Many of the things I warned about got worse. Free of the Christian baggage, my view of things is far different today.  I learned about the plans for theocratic take-over and well it's happening.

Let me show you a few quotes from that blog. One thing I notice reading some of my old posts on there, is my cognitive dissonance is thicker than cement, I am trying to adhere to a religious system that does not work when one believes in freedom and cares about the poor. I no longer believe in Christianity but still think the majority of evangelical and conservative Christians now fit every criteria of what their own book calls "antichrist". Click to enlarge:

I can see all the seeds of my own deconversion all over my old blog. If you think most preachers are all thugs, and most religious leaders liars and hypocrites out for cash and governmental power, how are you going to stay in a religion that advances all this stuff? I was done with all their bullshit and happy to be free.  That said, my knowledge of the goals, motives and agenda of the religious theocrats is probably higher than the average person. By the way too, it's not just the fundies out for full control, many other religious organizations are part of the Dominionist pantheon, including the Roman Catholic church.

Iran was a modern nation over taken by fundamentalists in Islam, think it can't happen here? Think again. Just read the comic Persepolis. The Christo-fascists have made their agendas clear if you know where to look.

It's scary that now Republicans may force their own version of Serena Joy from Handmaid's Tale on our Supreme Court, a woman who believes all married women should obey their husband's and who belongs to a parachurch organization that preaches obedience to spiritual directors. Why is this acceptable? She goes to law school, rises up the ranks, and then wants to pull up the ladder up and away from other women. Maybe like Serena, she could one day have her regrets.

Most liberals are in deep denial about the risk of Dominionism and theocracy coming to America. They assume that reason will prevail. I don't. They already have advanced plague on us all with their magical thinking and denials of science.

Maybe I've studied too much history to know how things can go down. Yesterday, I was in a small neighboring town, and saw a police car pulled in front of us, and they had a giant Proud Boy flag covering a back window. I live in a place where the majority of people are very religious. I know people around me would have no problem with religion ruling the show, and all freedoms being closed down.

My fears about the religious right taking over completely are there, and well it is tied to my religious trauma, both from childhood and later. I've been punished for not having the "right beliefs" and know now what it means to be ostracized.  I've been screamed at and even hit for "not believing". I have gotten a cold shoulder even from mainliners in my community who are pro-Trump.  We do know the cruelty from inside: the false promises, the lofty words, the religious oppression, the shame and the blame.  They would bring hell on earth, and the end times dystopia, for their Savior to come save the day. I recall that on the Handmaid's Tale show, that plague allowed the "sons of Jacob" to take over. When people name their political organizations after biblical figures, watch out!

A blustering orange sociopath, with his hookers and strip clubs they see as God's anointed helps is only diverting attention at what is being done. Most people wrongly see Trump as areligious, denying the true desires of the majority of his followers. I've tried to talk about Dominionism with a few people. Most don't understand, they think I am nuts or exaggerating. Maybe I served a purpose on that blog, I do not regret warning the Christians of what they were pursuing. Most didn't care. Their lust for power and hatred for others who don't belong or believe what they do, is fueling possible destruction of America and all it's freedoms.

Posted by Five Hundred Pound Peep at 6:57 AM