Fat Man Dies After Being Stuck in Chair 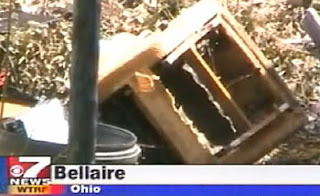 Obese Man Fused To Recliner for Two Years I saw this article recently, noticing the horror on different websites as they reported about this man that actually got fused to the chair needing to be cut out of it.

"The morbidly obese man died in the hospital after he was cut out of his home as he has been fused to his recliner he sat in for two years Wheeling Hospital in West Virginia confirms the death of 43-year-old Richard Hughes of Bellaire, Ohio. The man’s girlfriend called the paramedics on Sunday after she found him unconscious. The man was wedged in his recliner where his skin was fused into the chair from prolonged sitting."

What is scary is I remember there is another time this happened! One from couple years ago: "800-Pound South Carolina Man Dies After Getting Stuck in Recliner for 8 Months"

"Webb's body was physically stuck to the power recliner and firefighters had to cut him from the chair to take him to the hospital. He died a few hours later, his body covered with sores and a "very bad odor," according to a police report."

The wife in this case claims she tried to get him help at least in the beginning..

"For his first few weeks home, Daniel Webb was open to the idea of seeing someone. Getting to them was the problem. "Everybody kept telling us, if you get here, we'll help you. We didn't have no way of getting him up, and nobody was willing to come help us," Ada Webb said. "He just kind of said, 'it's in God's hands' at that point."

I've almost been stuck in a chair before, there is one chair too low here for me to sit on, I can still get up from but barely. I stopped sitting in it, and plan to get rid of it soon. I have fallen down on the floor before, not for a few years, and once had to be helped up [was able to get up partially on my own] and other time, used the bed alone to haul myself up. I have a online friend who was my weight before, she is now deceased, who was stuck on a floor for two days til someone found her. [she was too weak from other health problems to crawl to the phone] These cases frighten me because I can see a fat person of super size getting stuck and being left somewhere. I trust those around me to help me {I'd be calling paramedics to come help me}, but it is the super fat's person nightmare when it comes to losing mobility, I've done crazy things like walk on a broken foot even, this body has trained me to take pain, but sometimes pain is too high to tolerate. The people around these folks should have gotten some home health aides, paramedics in or something even if they had to scream and rant and rave on the nightly news for someone to do something! However I bet you dollars to donuts they were poor people who feared the medical bills or being left in a nursing home to die alone. Something in these two men also just gave up. The other day, a medical professional told me there are many fat people my size they treat who are totally bed bound. I think it is a blessing I can still walk, I do not take it for granted. But people do not realize the amount of pain I push through to get through a day or how I have to force myself to do so much. As the years pass by, people wear out, and old age itself is hard enough on the thin. I'm housebound from breathing during cold and hot weather, then things get pushed too far, I can only deal with so much at a time. For a person my size, one broken leg, a badly sprained ankle, a weakened condition can mean losing all mobility and that is where the really bad stuff begins. Knowing this impacts many of my medical decisions. The cusp of immobility is close to me. It is horrific that two people suffered this way, no one should have had to die that way. The people around them FAILED them to an incredible degree. Our country is still running at a level where there was help for them even though one could question the degree of access and ruined assets via medical bills. I saw the comments on the boards where the people blamed the men. NO ONE chooses that type of life whether they had medical conditions behind their weight or a food addiction problem. To me there is abuse and neglect in watching someone die that way and live that way. That is unconscionable.
Posted by Five Hundred Pound Peep at 5:15 PM