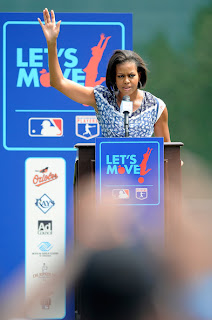 I agree with this guy, actually pushing the idea that fat kids never move is insulting, I still have my diary from when I was 10 years old, and I was an overweight kid even if not out and out obese at 10 years of age, and in the diary I talk about riding bicycles to the park [back then acouple of miles] and delivering newspapers by that same bike, playing outside in the snow and I was a very active child but I was still fat.

The man who wrote the article is a self avowed liberal {I don't belong to either side of the left or right divide} but brings up many good points. I watch them spending millions of dollars on more nonsense, knowing the kids won't lose weight, that their parents who are often poorer will be relegated in buying the processed MSG and soy filled garbage now passing for food.

Fat kids have enough problems without government-approved pseudo-scientific garbage about how they could be thin if they just ate their vegetables and played outside more often.

That is one thing I thought of when reading about this program, how it is invested in false myths about the fat, that fat kids are lazy, never move, and never exercise. Don't fat kids get enough abuse?

He talks about how they simply do not know if people are eating more or are less active. To be frank, and I've explored it enough on this blog, the food is DIFFERENT, very different but like feel-good often corporate sponsered gov't programs, Michelle Obama will never address that or other problems leading to obesity.

Elsewhere it is scary how Michelle Obama has blamed the fat kids, using them as a scapegoat even for the bad economy, I guess in her out of touch world, she doesn't realize that obesity and poverty go hand in hand.


But all of you here know something else, and that is this isn’t a new issue at all. You all know better than anyone that childhood obesity is already affecting your communities. It’s already weighing down your budgets. It’s already hampering economic growth.

I was a fat kid, how on earth did I hamper "economic growth"? I delivered newspapers from the age of 9-12.

What I want to know if all the dieting and exercising is failing for the adults, why do they expect it to work for the kids?
Posted by Five Hundred Pound Peep at 8:50 AM