Fat People Flipping You Off 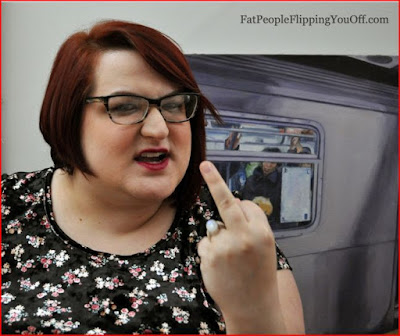 This is just too weird

Is this what size activism has come to? I can cuss like a sailor and have done the middle finger salute when needed, usually that pops up when another crazy driver has attempted to crush us on the road. Since leaving repressive religion, and an idea of a God taking down a score like a demented Santa Claus every time I cuss or say a word  like "shit", I've let a few colorful words of my own fly.

This kind of stuff makes fat people look bad. Look the fat bigots piss me off too, there's a few I have had fantasies wishing I had punched them out. My desire to stay out of court and county jail, kept my fists down more then a few times. I wish I had made an art project out of those giant red joke underwear Queen Spider sent me just to take the piss and to fight back. I may have a pair of them stashed away in my stuff somewhere. Fat people do have a lot to be angry about. We are treated like crap, and the fatter you are the more of a second class citizen you become.

A lot of the people giving the finger aren't that fat, well by my extreme outliner standards, so should I for my 200lbs over them, put up a double-middle finger salute?  This makes fat activists look silly. It also plays into the societal belief that fat people are "REBELLIOUS" and fat because they won't do what is right and supposedly become slender people from "EATING RIGHT". I know middle fingers are supposed to be "edgy" but honestly I am bored. Even one word that begins with "F" got so overused in movies and shows, that it's fire power got greatly diminished, the same goes for it's related sign language.

Please size activists do better then this.

Update on this one; I got too priggish sometimes from the Christian brainwashing. Some of the fat bigots do need flicked off! LOL


Posted by Five Hundred Pound Peep at 5:40 AM