Losing Friends Over Trump and Religion 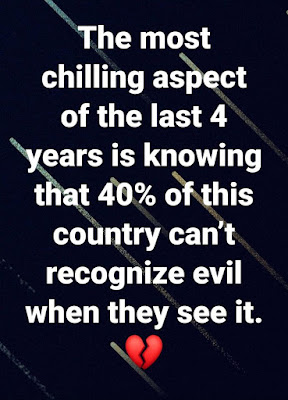 Three to four years after my deconversion, I am still losing friends. Some people talk of Civil War coming to America, the divides happening are reminiscent of that time.My realization that deconversion is influencing my life heavy where long lasting friendships are ending, has not been easy.  Some authors have written and talked about how politics is dividing the country, entire families, and life long relationships. This is true.

I realize the people I was around outside of my UU community and those in the arts locally as they clung so strongly to Republicanism, Christianity and Trump were toxic for me. Some can say  "Can't you be civil, can't you agree to disagree?"

I know everyone has learning curves, I had my own. The fundamentalists impacted me to believe some very wrong things, however in my case, those beliefs were examined with time and growth and were changed.  I hate that I was a part of fundamentalism at all. My regrets are huge. I still protested war and kept some liberal values, but one of the main reasons to leave was the evil.  I could not abide by a religion that had no compassion for others.

What is scary is they support things like the destruction of Social Security, which impact my life and survival.  I still remember that one old friend who told me to go off social security and shouted, "Social Security is a slave system!" Most likely she is a Trump supporter. After I went no contact I realized how abusive this was.

How can a friendship survive if your friend supports evil? Some are people I care about but how do you abide by that?  I mentioned the friend holding parties during Covid19 even during more severe lock-down times, but she's ghosted me over my Facebook posts. Some friendships I left, others left me. With several I tried to have discussions, I don't require that my friends match my religion or politics, but there's a point where things break down. They think I don't respect their beliefs and are hurt on their end, but I can't. How could I lie? Some casual friendships and acquaintances can survive hard lines like this but ones where you thought there was a meeting of the minds won't. Conservative Christianity destroys friendships because there is the requirement you stay a Christian else the friendship ends for many.

These friends also knew I was not a blind supporter of the DNC. I wrote about my reluctant vote for Biden on here. Even with that history trying to reach out to them was like a brick-wall. Maybe I am too outspoken. Maybe this is the price of being too politically active? This has been somewhat lessened due to health but I protested Trump for years and was vocal on many venues.

Maybe I am too autistic to understand neurotypical minds and this is why I failed to make any headway. There's times I have regretting being so outspoken as friends drop by the wayside but it is who I am. Some neurotypicals never break the rule of discussing religion and politics. Maybe I made too many mistakes. In my heart of hearts, I have a lot of pain about not being able to be "me" with a lot of people as it is. I have my husband and other close friends online but most of the social world feels like a minefield. My thoughts about how autism made me vulnerable to abuse grew intense. I worried about being too weak but at the same time, realized how people were reacting to a person in such an extreme body with a monotone voice.

With a few of these friendships, I didn't even openly discuss my deconversion for some time dreading the outcome. I suppose it showed around the edges. I think I alerted one, when I started talking about climate change not realizing she didn't believe in it. Aspies probably are too blunt for our own good so mistakes were made. Maybe friendships will end naturally with time and change. I know I changed with the no contact, I stopped being the same person. Maybe it was no one's fault that things went the way they did.

I wonder if this is how people in Germany of the 1930s felt when they realized Adolf Hitler was a bad guy and realizing their family and friends were going for him. Trump is following the Hitler game plan using conservative and authoritarian churches and religions to carry things out. My Uber-Republican family went full Trumpster outside of the gay cousin's family and his brother.  Since my contact lasted longer with those cousins though it is now ended, I saw that on Facebook too.

I am not a coward and stand up for what I believe, but it does cost you when it comes to relationships. Maybe this is a price that grows difficult at times.  There are people in my life who share my values, my husband, my UU church members and others, I do think about more ways to change and better my life in seeking out people who hold my values and one of those values, obviously is EMPATHY. If someone's politics are such, they believe I should go to the gutter, since I am disabled, what does this say? If pandemic is not enough to get someone out of a stupor, what will?

I had more layers unpeeled lately, realizing how conservative and right wing of a town I was moved to in high school, so much so that 90% of my classmates are Trumpsters and evangelical.  I am friends with some on Facebook. I don't fight with them and haven't separated from them over these matters unless they post directly racist memes, but that's only because these are more casual Facebook relationships.  The extremity of the religious posts and others, has only increased. My high school was so extreme, they had Republican rallies, seems illegal, but it happened. One high school teacher had the classroom walls plastered with Reagan and Bush campaign posters.

What is there to say the divide is happening. America seems to have gone crazy and Trump is a cult leader that's stolen too many friends.

Posted by Five Hundred Pound Peep at 4:29 AM