I'm AGAINST assisted suicide and euthansia: Not Dead Yet

Today I was unfriended on Facebook over this issue today. They did not like that I disagreed with assisted suicide and euthanasia.  We disagreed on so much politically and otherwise, she is an avid Obama supporter, I knew trouble loomed ahead. The mutual parting of ways did not shock me.

This stuff is dangerous for disabled people where they present the "death with dignity" nonsense to try and fool  disabled, old, and sick people into embracing suicide. I pointed out to her, to no avail that in a system where MONEY comes first, the presenting of your choosing to die, will one day cease to become a CHOICE but a duty. Not Dead Yet is one disability rights organization that stands against the lies about assisted suicide. I told her about this group and was unfriended post haste. 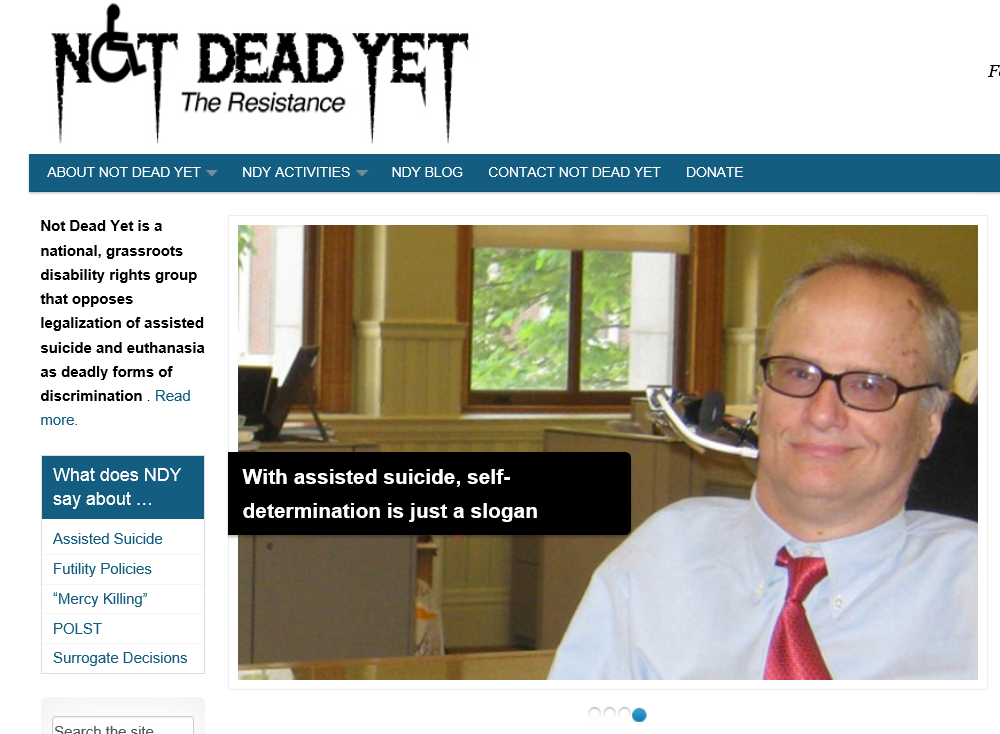 I believe human beings can refuse treatments from surgeries to chemo to radiation but when the line of actively causing someone's death [even your own] is crossed, this is going into a new area. I have had people tell me they would not have stayed alive if they were me! They couldn't take the pain, the suffering, the immobility! A few told me this right to my face which is kind of scary when I think about it. One brought me to tears that day.

Already in American society, disabled people have to fear being called non-productive and are told in other ways their lives are not as valuable. Already in this society we know money is floating the boat on so much. Are we going to trust the people who let Ebola into America with real answers about life and death? No way! Are we going to trust people to make these decisions who may lose some profits? That's crazy!

When I saw this article I wanted to puke

Terminally Ill 29-Year-Old Woman: Why I'm Choosing to Die on My Own Terms

I find it sad that someone that young is being told to just go kill herself and take poison instead of fighting for her life. Lest someone thinks I am being uncompassionate here. I was told at the age of 28, I would be dead very soon. Nearly 700lb people don't live very long. I could barely walk. I could not breathe. I was very, very sick.

Why is there no going to find experimental doctors in her case? No exploring alternative remedies for cancer like sour sop and a multitude of others? It's scary too in a propaganda type way that the poster girl for self-suicide for the ill, is so well, HEALTHY looking. She looks like she is in far better shape then me. I know appearances can be deceiving, but it seems even when it comes to the ill and our media, looks still matter. Notice she is how pretty she is and model looking.

The propaganda mill for assisted suicide is whipped up. Just a few weeks ago, the guy who headed Obamacare wrote about how he hoped he would die at 75.

Hey, they have to sell the death panel stuff somehow. Here they will tell you that the "quality of your life" will be too low and it is better you go die and save your family and your state money. I guess evil does pay in this society given his position. He openly supports health care rationing. This is a guy who has had a very spoiled life full of international jaunts, and physical prowess, that has cancelled out any compassion.

Like any good Social Darwinist, he goes on about how life only means something if a citizen is productive even with a yellow chart proving his case.

Absolutely sickening. Just wait til they make it official that any treatments are cancelled at the age of 75 beyond palliative care to save money.

And they will sell this all as a choice, and put "pretty words" on what they are doing to hide it. They will tell people, "We don't want you to suffer" as they tell you that your main option is to end your life instead of offering care and pain medicine.

I have been told twice I would die by doctors. The first time of weight and failing lungs. The second time from cardiomyopathy in 2008.  I choose not to believe the doctors who gave me a doom and gloom sentence. I've had to bear a lot of suffering in my life but know these slippery wannabe "Hemlock Society" types are not to be listened to.

I believed my lifespan would be determined by God and was in His hands. God is the reason I abhor the would be soft-murderers who want to play God over the lives of the disabled, sick and old as well. We are in scary times for the disabled. I am feeling it. The winds have changed, the wicked are promoting death as the answer to everything. They make me sick.
Posted by Five Hundred Pound Peep at 9:57 AM

Email ThisBlogThis!Share to TwitterShare to FacebookShare to Pinterest
Labels: Anti-Euthanasia and Assisted Suicide