Propaganda Against the Fat 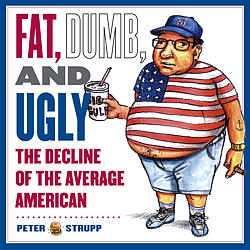 Isn't this just another way to say "Fat People are Stupid" but using biased studies to do so?

Hey I know America as a whole is dumbing down like crazy.  Idiocracy wasn't just a movie it was prophecy.  All the fluoride poured into the water? The stupid believe that the news tells the truth like this article.

"(CBS) Does being not-so-smart make people not-so-skinny? Experts say a controversial new study adds to a growing body of evidence linking low intelligence to weight problems. It shows that men who score low on IQ tests in adolescence are more likely to be overweight in middle age.
PICTURES: Living large: 31 ginormous goods for plus-sized people
For the study - described at a recent meeting of the American Heart Association - researchers in Sweden compared the waist-hip ratios of more than 5,000 40-year-old men to their scores on IQ tests taken when they were around 18 years of age. The researchers found a strong inverse relationship between the ratios, which scientists use to gauge obesity and heart disease risk.
In other words, the fattest men had the lowest IQ scores.
What might explain the link between low intelligence and middle-aged spread? One possibility is that less-intelligent people make poorer food choices, Dr. Robert H. Eckel, professor of medicine at the University of Colorado School Medicine, told CBS News. Another, he said, is that they are more averse to exercising than people who are more intelligent."

Some of us are too smart to fall for their garbage.

We know propaganda is real, and so is social programming. We don't fall for stupid crap like a woman who is a nurse supposedly having Ebola which supposedly makes you bleed out of every orifice, suddenly showing up bouncy like she just got out of the spa to give Obama a hug. We ask questions and realize money floats the boat as well as a multitude of other agendas. Obesity in the USA is being used more and more as a class marker as they pour toxic chemicals into the food. Some of that stuff most likely will affect the brain but what way to help with the slim thin as racing dogs elite vs, the fat peasant divide then to publish propaganda like this.  Supposedly the fat are stupid, that is why they are fat. Hey it keeps the focus off the real problems.
Posted by Five Hundred Pound Peep at 7:52 AM