Obama Does Not Care About Americans 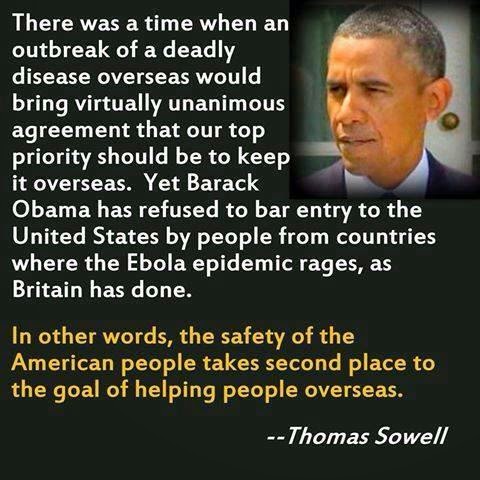 The only thing that makes sense is he wants to ACTIVELY DESTROY this country for the global elites. Remember Ebola has a 70% death rate. All the people who warned about this guy were called "conspiracy theorists". I want to vomit at all the graveyard whistlers on my Facebook, all funnily Kool-Aid drinking Democrats not independent thinking ones, who tell me how HARD Ebola is to get. Funny, so hard to get, but your doctor and nurses have to dress like they are going to the moon! Yeah right!

Just so you know AFRICAN countries have instituted a TRAVEL BAN and CARIBBEAN ISLAND NATIONS.

No one will be helped letting EBOLA SPREAD MORE.

Update: At least Obama did something, I was reading too much right wing crap when I was a fundamentalist even though I hated the Republican party. Imagine if Trump had been president during Ebola?
Posted by Five Hundred Pound Peep at 9:59 AM