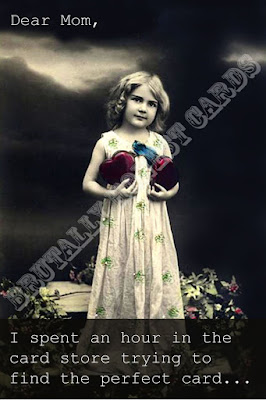 "The inside reads: But there weren't any for loony narcissistic martyrs."
Would You Dare Buy This Birthday Card for Your Narcissistic Mother?

This week is my mother's birthday--the third one, I've skipped. I'm two years NC but her birthday is just a week after the original cut off date. I find birthdays triggering. Maybe some years in the future I won't have those horrible feelings inside about "skipping" my mother's birthday. Perhaps most ACONs who have gone NC have those weird feelings during those so called "special days". You know things shouldn't be this way.

Pigs will fly before my mother ever admits she is wrong about anything. One thing this card brought something to light for me how I used to sweat and strain over buying my mother cards. They never had quite the right sentiments. Doing the lovey-dovey thing seemed way too fake and overwrought and other cards assumed a loving and close relationship. We all wanted it but it was not the reality. What was a little scapegoat to do, sweating and straining while in Hallmark?

Then I got the hobby of card making. One year I made my mother a nice card, I snipped out individual flowers and crafted them petal by petal making them appear 3-D for her birthday. I never heard one thing about that card which I considered a work of art when I was through.

This card would be rated G but many of the others are too salty in the language for me, but I wonder if anyone does send them? Being an artist I've imagined the cards I would make or send if I was "honest", but the one of those would have been used as fodder to tell the world how crazy I was.  NC of course means no birthday cards.
Posted by Five Hundred Pound Peep at 8:17 PM