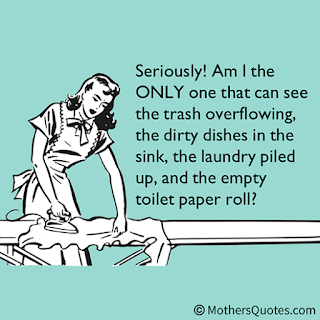 This is a meme that a narcissist might post. Some of them complain more then they do anything. The noisiest one in the room is usually the one getting out of work.

Hey right now I see 30 things that need done. I took a shower, used my nebulizer, wrapped my leg, did my insulin, took my pills, swept the living room, hung up 5 dresses that had been washed--we air-dry these, made tacos which I chopped veggies for lunch, watched some movies, drew a comic panel, threw away more papers, and collected some trash. As much as people tell me I don't do...I wonder what they'd say if I did nothing.

New Life rule: If someone comes over to my house and complains to me how messy it is in here, without helping out or offering to help out, then it is red flag time and time to be shown the door. I'm too tired now. The days of house-work fascists putting me down are over.

I have showed pictures of my apartment to two different close online friends who told me, your things are older and more "simple" but you are not a hoarder nor is it messy, it seems to be more a problem of things being "old".  One college friend who visits never complains. Yes the carpet needs to be ripped up and replaced, the walls need painting, these things were admitted to the Housekeeper Ratchets.

Sometimes I wonder how much classism I faced, when the white-glovers came out with their snooty noses in the air. One good friend gave me a revelation where I asked in my own mind, "Why were these neat freaks torturing a severely overweight and disabled woman over housework?" It kind of tore the veil of some of the people I was choosing to be friends with.  One part of recovery is changing your relationships and noticing what doesn't work. Today the me of today, knows I won't take it anymore. I had the revelation, that it really wasn't about the cleaning or them disgusted by it, or afraid of germs, it was just another chosen avenue of abuse, and they treated me just like my mother. This stops now. I need to avoid personalities like this.

Anyone just looking at me knows I have breathing and other problems that make cleaning very hard. Not one ever lifted a finger to help even when I was very ill. There is no money to "GET THINGS DONE" that need done.  I have the running list in my head where the green stuff simply isn't there. Every poor person sees the stripping that needs replaced on their floor or the fraying couch cushions. We don't need reminded of it and to have these things shoved in our face by condemning people.

One thing I have noticed among narcissists and others is how much these people use housework to abuse. Growing up my mother's favorite word for me was "slob".  It ran head to head with her protestations that I smelled. Actually back then I dusted, cleaned, vacuumed and cooked constantly. I was abused for years with housework as the vehicle. Cinderella would have been bawling her eyes out. The neat freak standards were extreme. You could eat off my mother and sister's floor. My sister has a housekeeper who comes in and cleans but guess who got judged years ago?

Everything could shine in my house growing up, with straight vacuum lines in the carpet, the sink and floors scrubbed down and my mother would find one dish in the sink or one crooked picture and start screaming about you lazy blankety-blank who does everything "half-assed". Hours of cleaning would be trashed by her own rendition of Joan Crawford and those horrible wire hangers.  Today I realize now matter how much I cleaned it never would have been good enough. If I won the Lotto tomorrow, and gutted this apartment and had it redone or bought a rancher with smooth floors and granite counters, a narcissist would find something to criticize.

To be honest, it horrifies me that I let mini-versions of my mother in my life. Was some deep psychological thing at work? Was this what I was used to? This is something to now be mindful of and prevent from happening again.

I will admit there was a time I didn't want to clean anymore. It's still true but to stay healthy, I have to clean. One bit of rotting trash or spot of mildew and my lungs would let me know.  Living in apartments if you do become a hoarder or if your trash smells, neighbors complain. You wouldn't last long and they would shred your lease.  I've never gotten that bad, but I know my lack of money and housework skills means my apartment doesn't look like all other people's. People with smooth wooden floors, new furniture and 2500 square feet with a basement, shed and garage have far less challenges storing things instead of attempting it in 800 square feet.

Since NC is changing my relationships, I think about the abuse taken from people over being a bad housekeeper. It wasn't just this ex-friend but some others, who reminded me of my mother.  Today I have woken up to the deep classism and abuse I took from some women who were narcissistic and judged me on my household. I know my upbringing opened me up to this. Anyone who wants to pick on a disabled woman for bad housekeeping is cracked in the head.

Today being NC for two years, I realized I took abuses from people, most would have refused, that includes people who decided to abuse me over housework. One now ex-friend seriously said to me, "It disturbs me to come over here, and see the mess and old things." At the time I stood up for myself but really it was for naught. This was one time the crack in her façade showed where I should have paid attention to the inherent disrespect.

It has occurred to me, just like my mother she called others hoarders and said people were messy. When she attacked people it usually was over their lack of cleaning ability. What is scary is I would run around scurrying around to make sure the kitchen counters were wiped off and the floors were swept before she came in. Now I ask, "What was I thinking?"? Now I know better to read those signs ahead of time.

Even if you admit to people, "Yes I am a very bad housekeeper, and I seem unable to get a handle on things." That cuts you no breaks too. The mean people still complain about bad housekeeping and use it as a weapon against you.  They consider cleanliness next to godliness and if your everything doesn't look shiny, then to them,  you are Satan's daughter and lazy to boot. And they don't just do it to you, they bring others into that fold too. Here is another life lesson, housework fascists are a nightmare and they make the rest of us always feel bad. Housework is a weapon used especially against women. Many women especially who are ACONS, have been shamed, blamed and abused over housework way too much.

I wanted a home cleaning aide, but if you have a spouse they are far, far harder to get.  The people with no help are understandably a higher priority. A nurse called on this for me around two years ago and I was turned down. They know he helps me with laundry and other things.

Thank God my husband never nags me about housework, that is one reason my marriage has survived. Also I am praying to God,  Please send me some messy local friends who hate housework too!

Are You Fat Because You Don't Do Enough Housework?