You are Entitled to Your Feelings 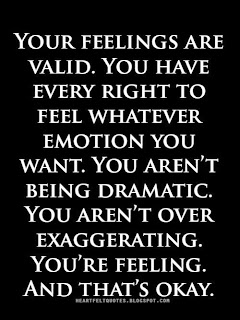 Narcs shame others over having feelings because they have none. We all are entitled to our feelings. Of course what we do with them is what is important but most of us ACONs spent lifetimes being told that what we "felt was wrong".  Within my wicked family to even have feelings of nostalgia, missing anyone, or any other emotion that someone with a conscience was against their rules.

When this is replicated online by those who say they are representing ACONs or  tell us they are one themselves that makes no sense. Someone cannot represent the ACON community in any positive fashion and condemn people for natural emotions that are going to arise out of severe abuse. One thing I'd like to say to those who condemn ACONs for "not getting over it", is for most of us, our abuse did not end the day we turned 18 but expanded long into adulthood until the day we shut the door firm in the face of our abusers and walked away in no contact.

Some of us have lost our health and even livelihoods because of what narcs did to us. I have learned that anyone who tells me what to feel or condemns me for my emotions is not a positive person to be around. In fact when therapists deal with clients one of the first things they teach you when you are new to therapy is that your feelings are valid, and YOU HAVE THE RIGHT TO FEEL THEM.

I dare say that there are personality disorders where the feelings have been so sublimated, is that they are no longer felt and they demand this of other people.  They want everyone else to shove the prodding conscience and feelings in the closet too until they are dead. The narcissists definitely don't want any messy emotions cluttering up their space as they connive and scheme. Narcissists have shut off a whole spectrum of them and demand it of everyone else.  Everyone who was a crying child around a narc parent knows what it was like to be smacked and told, "I'll give you something to cry about!". That happened to me hundreds of times. They failed to form me into the conforming and manipulated stoic they desired.  If my parents couldn't break me, well as I told friends, that Stasi would fail to. What is rat in a cage in the face, [thinking of Orwell here]when your body has done so many worse things to you?

We live in a narcissistic world that is growing colder and colder and part of that is telling people "emotions are wrong". I see this even with the positive ones, where one is supposed to freeze too heavy feelings of love or joy. One thing I took a look at myself was I was afraid to feel happy because it got ripped away whenever I did smile or laugh by my parents. Now I am better to express those feelings but it gave me a bigger picture. Others tell you that everything is supposed to be reacted to with Hunger Games stoicism. One rule among narcs I have noticed is never show any emotion, anger or otherwise.

Take a look at books from the Victorian past even and notice how friends and others express love for one another and how even in mourning, they openly expressed their grief. Today everyone is supposed to be a dead-eyed drone and mindless consumer for the corporations and the powers that be. Smile serfs! They already tell us what to think in the media and now they tell us what to feel. The "change agents" and disciples of the "chosen" intelligentsia are busy doing just that. Some may consider me too conspiracy minded but there is a reason certain people with the smell of brimstone around them who got elected as the "popular" spokespeople for narcissism. There is a difference between being DIRECTED and having honest discourse among blogs. I have noticed elsewhere the "change agents" of narcissism, directing more dead emotions in the face of evil. They seek to shame ACONs instead of trying to understand that negative emotions in most human beings don't come out of a vacuum.

One lie told out in the world is that it is WRONG to ever be angry. Anger itself is not always a sin. Anger can instigate sin, but it is not always itself wrong.

Anger has a God-given reason to exist from defending the innocent, to defending our boundaries and for standing up against evil. Milquetoast panty waist preachers will preach "Never be angry" and "Never judge" but this is one reason evil is allowed to run rampant in this world, because the "good people" with working consciences have been told to quell any protest or speaking out. Excuses are made for the wicked. I do not trust people who say "Never be angry!". In my experience most have been stood against justice and have sought to silence whistle-blowers in this world. They want you feeling guilty for your emotions, so you shut down and shut up. I believe God mandates certain behavior on my part, in not seeking revenge, and in trying to live a decent life, but is anger itself a sin? Anger in cases of severe abuse can keep you alive. It can keep you from being broken. The "Never be Angry" crowd, just don't get it. They would tell a rape victim, shut up and stop trying to punch your rapist in the face. I am not a pacifist.

One thing I am kind of a different Christian, maybe like an "outsider artist", an "outsider Christian", the white picket-fence people who look and act so proper while some are decent people who had good lives, others are just with the appearance of righteousness.  Sugar-candy Christians are the ones who tell people "Don't rock the boat, "Ignore the fact Rev Perv is hanging out all hours with a 16 year old!" and "Hug the Vampire!" [a la Smakintosh's video I mentioned in another article]

I don't go with the "be nice"-"sugar-coaters" who barely believe Satan exists anymore. One reason sex abuse, and spiritual abuse is so rife in so many of the churches, is because the "good" people are told to forgive the "refusing to repent" reprobates and shut down all feelings of outrage. I left the Catholic church in 2002, when I was born again. I would have left alone finding out what a pedophile factory that place became and how the orders from the top were to protect the child-abusers. Of course sex abuse and other abuses are in every religion and denomination, but I have thought about for years why do so many stand silently by when so much evil is afoot? Most are shamed and told they are "too angry," "too bitter". This has been said to every activist in every cause in the world and that includes those who stand against fat discrimination. The message are "Get with the status quo!", "You are too angry!", "You can't forgive!", "You are bitter".

I remember telling one woman, in the Catholic church I left, "I am so disgusted!" She got upset and told me sex abusers need love too and the pedophile protecting bishops knew best.  Here is a place where people don't even understand how evil works and how bending down before and offering pearls before swine allows you be rend and how they want people to shut down emotions in their service.

If you are an ACON remember one thing about your family? How you were UTTERLY IGNORED unless they were busy beating you or cuffing you on the ear or doing a put down session? Your feelings didn't matter during the times they weren't telling you to shut up.

I was thinking about something the other day, how mine simply did not care how I felt and told me I had no right to my emotions and today I say I do. The me of today will feel what I feel and own it. No one else has the right to tell me what to feel. No one else can read my mind or know what I have been through or not. Raise your hand if you have several chronic disease that have almost ended your life several times via medical neglect and abuse. No? Who are you to judge me then?

I have my good days where I am focusing on the myriads of life--comics, nature and time with husband and friends, but then bad moments still can come. I cried the other day, thinking my mother still gets to spend time with siblings who love her, while mine do not. Mother's Day obviously puts us all on edge. I spent years being told I was not allowed to have feelings, and to be frank if someone feels anger or bitterness, I hope they can deal with it in the proper fashion but for someone to tell someone who has been severely abused they don't have the right to their own emotions is completely and utterly wrong. They are not coming from a place of love or compassion but one of false judgment and "emotion control".  They are joining the chorus of narcissists and abusers who told us to hide our tears and squelch our anger and take the abuse.