The Way They Speak To Us 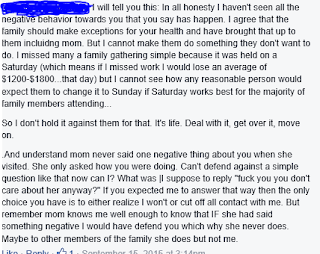 From an old PM interaction with my brother. [language warning] It's from some years ago.

He would have been telling the truth to say, "You don't care about her anyway".

In this one, I probably had complained about them driving by my apartment without seeing the nieces or nephews or something along those lines to him. My words weren't that extreme but the littlest rebellion against the Queen was to be stomped out at any cost.  Of course I didn't get much empathy. There never was any. He always took my mother's side on everything.

A decent relationship with anyone in my family is impossible. There's too much baggage there. Even the ones on the side lines that twitter on about Aunt Scapegoat or hold to the family lines, are impossible to talk to.  There is a feeling of anger and disgust in my stomach. Maybe they pick up on it. I can't erase it unless I get a lobotomy so good relationships are never going to happen. Nice polite words and being kind and sending cards, aren't going to form decent honest relationships.

Even with the extended cousins, while some and/or their children are still on my Facebook, I just went silent. I sent out a few birthday cards and did the social niceties but there is no relationships really there. With my brother years ago, I ceased all discussions of my mother and rest of the family and in the last two years all discussions of anything personal after his heart surgery were ended. He didn't even notice as I said nice things about the weather and asked how his boys were doing and this "change" was left unnoticed to him. The only time I talk to him now is when he calls on Thanksgiving or Christmas or one of his kid's birthdays. The relationship has already died out, he will be the same to me as seeing an old classmate I haven't seen in 30 years that is on my Facebook.

He gaslighted me too, telling me she was innocent as the driven snow, but he knew which side of his bread was buttered. His constant bragging wore me out too. There's a reason he told me his exact income for the weekend which probably amounted close to my monthly income at the time.  I think about too how these people spoke to me and gaslighted and invalidated me at every turn and yes I have asked myself "WHY DID YOU PUT UP WITH IT?"

He always told me he defended me, but I have realized that was a complete lie. It is weird how long it took me to realize that. It does horrify me how I allowed so many of them to talk to me like I was "nothing".  Those days are over.  Regular life is getting turned over, because I refuse to accept things from people I used to accept, but more on that in the next article.

Posted by Five Hundred Pound Peep at 6:41 AM