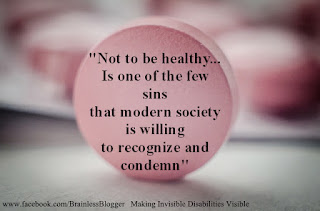 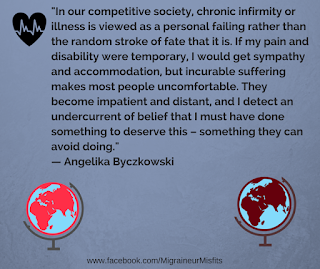 The Problem With Being Sick

"You`re sick.But that is not the problem.The problem is that you had the audacity to be Chronically Ill. And that simply is not socially acceptable.People want to know when you will get 'better'.They wonder why you 'don't look ill'They want to know when you will be ready to work.They want to know how it makes 'sense' you can do things one day, and not another.They don't want to work with you. Certainly don't want to accommodate you. Being forced to leaves a bad taste in their mouths. Why should they have to conform when clearly you can't 'handle it'?And why do you decline all those invitations? Or never get any plans done when you say?Why don't you conform to what a sick person should. Do everything you can to get better and you will, don't you know that?"

"You need to push yourself"

"I would rather be dead then live at your weight."

"If you were really disabled, you'd already be dead, no one is that sick for 20 years"

"If only you lost weight and ate right, why don't you want to lose weight?"

"God will heal you if you have deliverance or overcome your wickedness."

"God has a plan for your life and that includes getting better."

"You have nothing to show for your life, your life has been a waste." [probably some of you can guess who said that one]

There is this judgment out there for daring to get sick or in having any health problems. I used to think being fat earned me this illness derision but have gotten around other disabled people of normal weights who get the same garbage unloaded on them. I believe life has gotten harder for the disabled especially with New Age and other beliefs growing that illness is a self-caused and chosen thing. The prosperity gospel types certainly see illness as something arising out of a person's "poor choices" or "sins".

It took me years to figure out how people were seeing me. By one spiritually abusive person, I was seen as "cursed", church people saw me as having some deep secret evil for having such rare and deforming illnesses---remember how much I weigh, I do not look normal or even fit the criteria of normal. Many in the church community told me if I became a good person and released "negative" spiritual holds, that my body would become a good and normal body.  When I was not a Christian, people in the New Age community and other beliefs told me I must have been wicked in a "past life" to be so chronically sick so young. Others told me my karma was poor and I was paying for the evils and ill deeds in my past "incarnations". I could never get a break, the core message was being sick was my fault and no one else's. Supposedly I had chosen everything from bad lungs to out of control weight.

My family used my illness as one reason to abandon me and basically keep me out of the family where I wrote about them rejecting me first. This was done indirectly expecting a woman who was getting home nursing care at times to always be the one to do all the traveling and no one coming here. Sadly when sick, many people patronize you or only see you as a "duty" or you can become a "project". You are not even seen as a human being then but someone who remains as the "other". Churches are notorious for some reaching out the disabled and down and out and not seeing them as an equal person. Others still judge you on visible disabilities vs. invisible. So you're very overweight, they know other very fat people your size who can hold jobs and walk in the mall, why can't you? Why can't you breathe in the middle of August or January to go outside and travel when April was just fine?

It's tough, one gets tired explaining here too. With illness JADE comes in handy too.