They are doing more and more to destroy it: [double click to make larger] 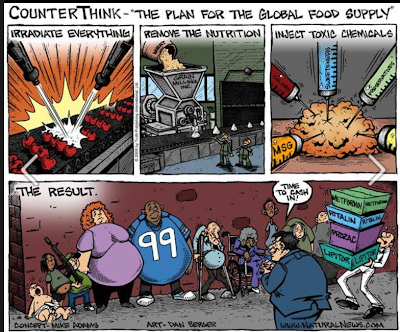 The Plan for the Food Supply


This means that while irradiating food may decrease outbreaks of food-borne illnesses, it will have the unintended consequence of increasing the number of people who get sick from other infections (and chronic diseases) due to the fact that their source of natural medicine has been destroyed. For many Americans, you see, salad greens are their one remaining source for phytonutrients. Given their diets of processed foods, junk foods and cooked foods, there are very few opportunities for these consumers to get fresh, phytonutrient-rich foods into their diet. And now the USDA wants to take that away, too, by mandating the irradiation of all fresh produce.

Let me make a rather obvious prediction, on the record: If the irradiation of fresh produce goes into effect in the United States, rates of infection among consumers will sharply increase, not decrease, due to the removal of immune-boosting natural medicine from the food supply. Consumers will also experience higher rates of cancer, heart disease, dementia, eye disorders, diabetes and even obesity. By destroying these thousands of healing phytonutrients, irradiation will leave many consumers defenseless against modern society's many health challenges.

It is no exaggeration to say that a policy of mass irradiation of fresh produce is as blatantly stupid as the Romans building their aqueducts with lead-lined waterways. As historians have explained, after the aqueducts were built, the water delivered to the Roman population was contaminated with lead -- a heavy metal that causes numerous health problems, including insanity. Many historians blame the lead-lined aqueducts as one of the primary reasons why the Roman Empire fell: Its leaders went mad, and the rest is history.

I would argue that America's leaders are already mad, but that's beside the point. If we start irradiating our food, thereby destroying its nutritional value, we are going to unleash a cascade of unintended consequences even greater than the Roman's aqueducts. Absent the protections of phytonutrients found in plants, the health of most consumers will rapidly decline, and we'll see the U.S. thrust into a quagmire of chronic disease and medical bankruptcy. (It's already heading there, of course, but killing the food supply will only accelerate the downward spiral of health.)


I know when I eat the bagged salad greens sprayed with chlorine, I get sick, I can't digest them. It means illness and lots of time in the bathroom without getting graphic. Eat greens at a organic foodie restaurant, where they are fresh and non-sprayed, they digest just fine. So I know it is not my imagination. They are doing things to food that are destroying our health. I believe that low nutrition can even lead to obesity. That is a fact.
Posted by Five Hundred Pound Peep at 11:30 AM