What Do Skinny People Eat? 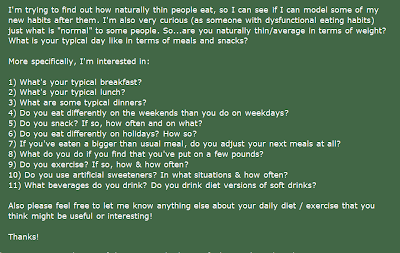 WHAT DO SKINNY PEOPLE EAT?

Add this to the SKINNY PEOPLE EAT TOO FILES.

I have been to many a church or club dinner and seen them eat cake, fried meat, fried items, desserts, ice cream. I have seen skinny children eat the same amounts as fat children. I thought this was very interesting ASK METAFILTER page because they ask skinny people what do you eat? Some of them obviously tweak their diets, but then so do I.

To the guy who keeps writing, "You are a glutton and you suck!", I'm not going to post your comments anymore. You haven't listened whatsoever. If you think that helps fat people it does not. You ignore when I have asked why are fat people hungrier? Why do I feel hunger pain every 4-5 hours and why is skipping a meal far harder? In fact, I have discussed  here, what I have to do to avoid weight gain, which means NO FREE EATING. Unless you live with me, you do not know what I am eating or not eating, what I am eating, or WHY I am eating it.

"My stick-insect-like 6ft 4in, 165lb husband eats like a toddler. Pizza Rolls, frozen burritos, corn dogs, coffee and cigarettes. (Ok, maybe that last part isn't like the average toddler.) I eat a well-rounded, pretty healthy diet and I weigh about what he does at a foot shorter."

"I'm a 60 yr. old woman, 5'5", 120 lbs. I eat all the time. I also usually exercise a lot: walk for an hour every morning and do yoga a couple of times a week. I don't eat much meat, never eat ice cream, avoid gravies and other rich sauces. I eat a lot of vegetables, both raw and cooked, whole grains and some refined white pasta, a lot of fruit. Nut butters, fish, sea food, some cheese. I drink an occasional beer or glass of wine."

"I am a thin person (5'2", ~100 pounds). I have always been a thin person. Based on my mother's example, I will likely always be a thin person; I'm pretty sure I'm not qualified to give advice (but here I go anyway).

"I eat lots of grains, lots of vegetables, lots of mostly-plant-based proteins. I also eat butter like crazy and drink whole milk; that part might not work for everyone. I exercise often. I stop eating when I'm full. I also like eating when I'm bored; At work, I keep baby carrots and trail mix and saltines around the office to keep my hands busy. When I'm not drinking milk, I drink a lot of water and tea and sometimes lately coffee, but not much juice or soda. I don't usually eat much really sugary or greasy stuff, but when I want them I get them and don't feel guilty about it."

"I love food. Sitting down to a good meal is the favourite part of my day. I eat whatever I like, whenever I like. This doesn't translate into constant junk food, sometimes I feel like a bowl of veggies other times I feel like tim tams. The main thing I've noticed is that I eat while I'm hungry and I stop as soon as I'm not. If there's food still on the plate, then so be it. On the other hand, I've noticed a lot of other people have to finish everything on their plate no matter what because it was how they were raised. I also get hungry more often (not the standard three times a day thing) but I also get full more quickly. I couldn't give any advice per se, I lucked out because of good genetics. It's also led to me being incredibly unfit as I've never felt any kind of societal pressure to exercise. This has led to me being 22 and puffing when I climb up two flights of stairs."

Some things I see common with the thin people....

1. Some are able to  eat-eat when hungry, regular meals and burn off the calories properly. Most of the time this seems to be in conjunction with some exercise and ability to move around or participate in activities at a good clip. Others though admit not exercising.


2. Many have far better metabolisms. The amount of food described to me in many cases is not that far off the reservation and seems NORMAL.

3. A key ingredient is exercise. I know my inability to breathe well which came before the severe obesity really impacted my weight beyond the already diagnosed. In other words are you burning off what you eat? What happens if your body's nutritional needs or hunger outweigh your ability to burn the food off?

4. Some are resorting to bulimia and very controlled eating.

5. Some of the thin seem to be able to skip meals with less repercussions or dire things with their metabolism. I wish I could skip meals but have failed at this, though one thing I am trying with effort is to DELAY eating, that seems to be a technique to lower some of the calories for the day, ie if I eat lunch at 3pm, there will be no need for a later snack, though sometimes life will get in the way here, company, having an appointment etc. With this, I have had to learn to accept physical hunger pain and deal with it for a matter of hours.

6. Some avoid processed food and focus on fresh.

7. I saw no mention of food insecurity and they seem to be able to "choose" what to eat, but this being the internet granted most would have the economic situations to afford a computer and Internet hook-up. There seemed few that said, "We can't afford the food we need or desire."

Posted by Five Hundred Pound Peep at 9:04 AM